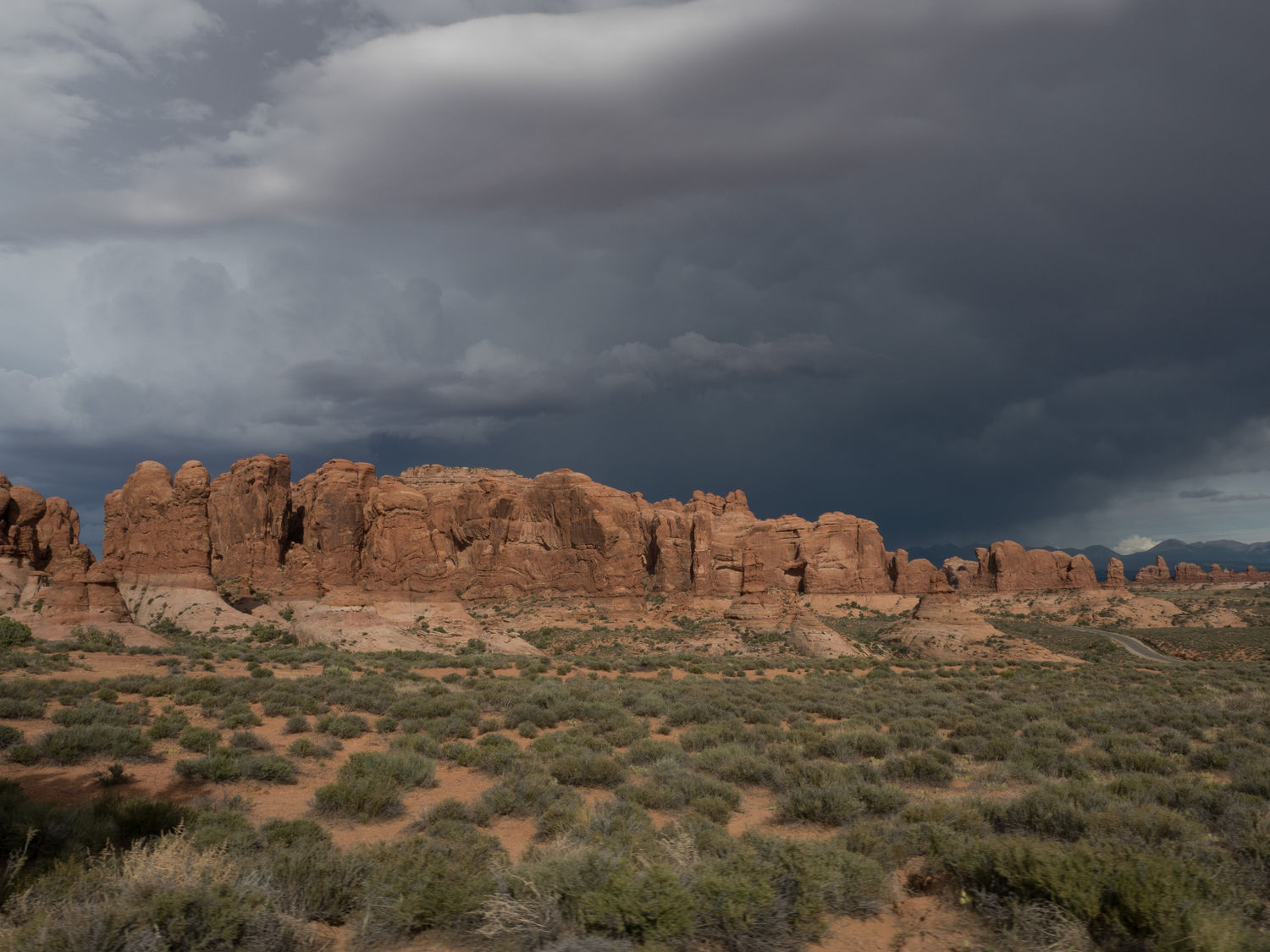 I guess I need to begin by covering yesterday’s drive, since my post went up pretty early in the day. Our drive was pretty uneventful, as expected, and we made it to Amarillo in good time.

We did drive through a little rain, and it turns out that my parents didn’t bring an umbrella. Apparently in my mom’s world, it doesn’t rain in July. My dad thinks that is hilarious.

Once we got to Amarillo, we dropped our stuff off at the hotel and went to Cadillac Ranch. Cadillac Ranch is a public art installation just outside the city of Amarillo. It was actually my featured image yesterday.

In the 1970s, a couple of artists buried some cadillacs in the dirt, nose down, and “at an angle corresponding to that of the Great Pyramid of Giza in Egypt.” I had no idea about that last part until I was reading the Wikipedia page out loud in the car on our way over there.

The site is meant to be used by its viewers, so people spray paint names, images, and art on the cars when they visit. They don’t always clean up after themselves, so a great deal of trash litters the area. It was particularly bad this visit, since this past weekend was the Fourth of July. Apparently it was the location of an impromptu fireworks show. It had also rained pretty recently, so most of the area around the cars was covered in filthy puddles of water. With all of the water, only two of the cadillacs were accessible for people to paint.

Needless to say, it wasn’t as pretty as it has been in the past, and we didn’t stay long. The smell of the local stockyards was on the air, and it was late. We went back to our hotel and went to bed.

Today, we began our morning in Amarillo at 5am. We left our hotel by 6:15am, and headed across to New Mexico on I-40.

At 7:30, the time rolled back to 6:30 again, so we effectively gained an hour. Our rental car rolled back on its own, and we were surprised by the time. On the way across New Mexico, we stopped at couple of their very well-advertised gas stations, including Cline’s Corners.

While making one of our pit stops, Ripley some some prairie dogs outside the window at a stop light. She absolutely lost her mind trying to get to them, and she was upset for 30 minutes after. Those prairie dogs don’t know how lucky they were that she was buckled in her seat in the car.

While we drive, I usually read to everyone for entertainment. Today, I was reading from The Hot Zone, by Richard Preston. My mom is fascinated and keeps begging me to keep reading when I have to stop for a while. We also listened to podcasts from Radiolab, which you should check out if you like science and technology. Overall, we had a pretty entertaining day listening to stories in one form or another.

Since we got such an early start, we arrived in Moab just before 5pm. We dropped our things at our hotel and rushed back out to see Arches National Park, which is just outside the city.

There was actually a little thunderstorm brewing while we took our pictures, and it made for some beautiful views. We could see lightning off in the distance, and when the rain finally hit, it poured off of the rock formations in streams and waterfalls. It rained for less than 5 minutes, and it already looked like the park was flooding. I can only imagine what would happen if it rained for any longer. When it was over, we spotted a rainbow in the clouds overhead.

When we finished at Arches, we came back into Moab and put the dogs in their kennels while we went to get some dinner. There’s a little pizza place here called Paradox Pizza that Mark and I have had before. It is delicious and small, so it is a really popular place to be. Sometimes it’s hard to even find a seat.

We ordered a Greek salad and a small vegetarian pizza, which had mushrooms and red and green bell peppers. The food was great, and the service was quick and efficient. I’m not sure we will ever manage to visit anywhere else unless we stay for more than a single night.

Tomorrow morning, we’re getting up early to run the beautiful trails that run in and around Moab. It’s a gorgeous trip, and Ripley and I are really looking forward to it. I’m not sure anyone else in the family enjoys running as much as we do.