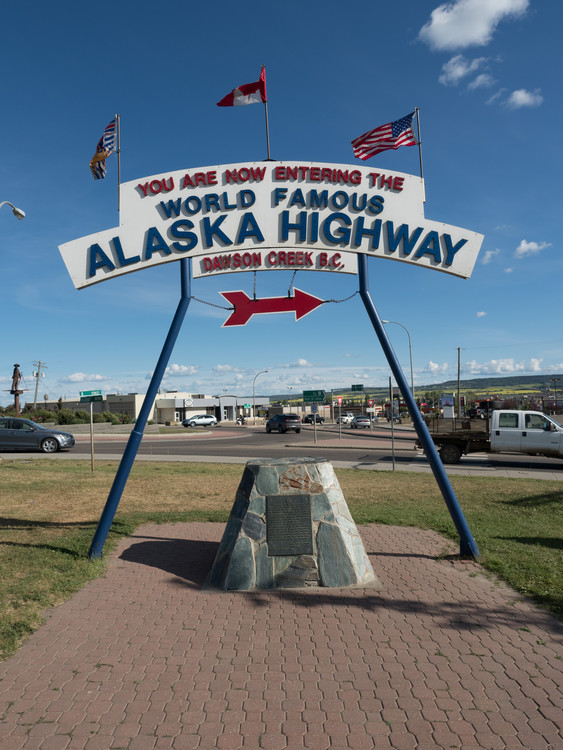 We began our morning in Airdrie by exercising with Ripley in the industrial area around our hotel. My parents slept in while Mark, Ripley, and I were out and about. We had to rush back to the hotel at the end of our workout, because once again it started to rain. When we’d showered and packed up, we stopped by Tim Horton’s for our breakfast.

I love Tim Horton’s. I’m not sure why, exactly, but I really developed a taste for it when Mark and I visited Prince Edward Island a couple of years ago. I was really excited to see it this morning, as you can see.

We had a pretty uneventful day, overall. We took pictures mostly at gas stations. We drove through very sparsely populated farmland for most of the day. Two really interesting things happened on the road today, though.

Well, I say interesting, but the one is funny and the other is a little scary. Let’s start with the funny story. My mom has not yet adjusted her expectations for bathroom quality. She will look at a slightly sketchy gas station and turn up her nose, insisting that we wait for the next opportunity.

Today, that plan failed her. As we drove along our mostly empty highways, Mom decided she needed a restroom break. She saw a sign that said that the city of Gunn was just ahead. She wanted to stop there to go to the restroom. The next exit we saw led to a small, local gas station. She didn’t think it looked good enough, and besides, the city of Gunn was coming up. She wanted to stop there.

We kept driving, but we never saw another exit for Gunn. As it turns out, Gunn was the gas station. “As a designated place in the 2011 Census, Gunn had a population of 0 living in 1 of its 1 total dwellings.” We ended up stopping at some pit toilets about half an hour later. Lesson learned, I hope. We will see if she plans to lower her standards a little tomorrow.

Now, for the scary story. A little later in the day, we were driving along and suddenly we had lawn furniture in front of us in the road. We’re divided in opinion as to whether it was plastic or metal, but regardless, it was terrifying. We managed not to hit it, but I can’t be sure that the people behind us were as lucky.

A little ways up the road, we saw a man pulled over on the side of the highway with his flashers on, tying his load back onto his trailer. I can only assume that he was the fellow that had spilled the road hazards. Mark and Dad wanted to make sure that I mentioned our, “Oh, shit!” moment for posterity. Or something.

In any event, we made it to our final destination, Dawson Creek, British Columbia, in a reasonable amount of time. The first thing we saw after heading into town was the only Walmart we’ve spotted in days. Everyone in the car let out a little whoop. It’s kind of embarrassing that we’re excited by the littlest things.

After finding our hotel, we headed into downtown Dawson Creek to take our pictures at Mile Zero of the Alaska Highway. It’s amazing to me that we’ve only just arrived at “the” highway that leads to Alaska.

Mile Zero has a few little tourist attractions around it, with train cars and sign posts, and a visitor center. We missed the visitor center, as it closed at 5, but we managed to get a few pictures around the area. Dawson Creek is a cute little town, and the only civilization for miles.

We’ll be on the Alaska Highway until we reach Delta Junction in Alaska. Originally, the road was called the Alaska-Canadian Highway, or the ALCAN Highway. It was constructed during World War II by the United States to connect Alaska to the Lower 48. The U.S. was concerned that Alaska would be attacked and we wouldn’t be able to defend it. It was a military highway for years, and civilian use was restricted. These days, it is basically the road-trip tourist route into Alaska.

Once we’d finished with our pictures, we dropped the dogs back at the hotel and went out for dinner. We tried a small chain called Browns Socialhouse, which said it offered some vegetarian options on its menu. My parents both had giant hamburgers and fries. Mark ordered a veggie burger and fries as well. I ordered the Dragon Bowl. It was great. I would go back, if only it were a little closer to home.

Our waitress mentioned to us that a lot of Americans driving the Alaska Highway expect that everyone in Canada has been to Alaska. She told us that she doesn’t know anyone that’s ever been. Honestly, I’m not surprised. Many of the same wonders that you can find in Alaska can be found in abundance in Canada as well. It is a really great looking country.

Tomorrow should be a shorter day, and I think we will do laundry in the evening. Hopefully we will manage a few more cool pictures than we have for today.