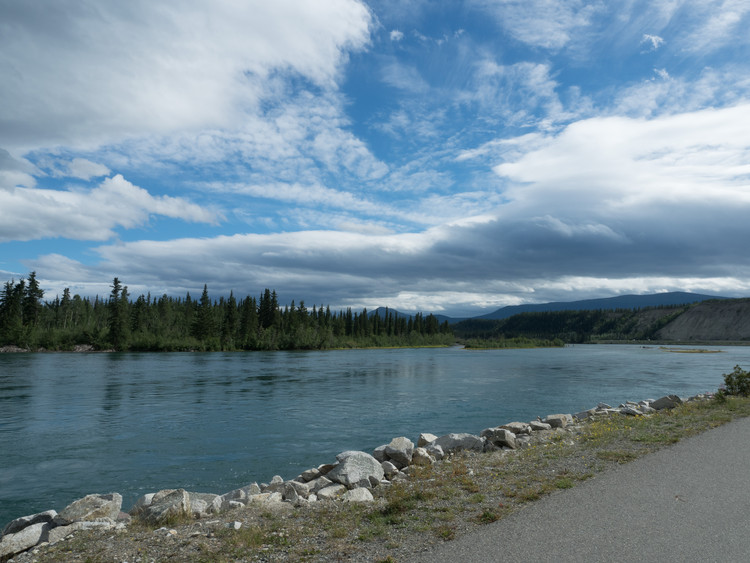 Today we visited quite a few bridges. If yesterday was a day for animal sightings, today was a day for bridge sightings. In fact, we didn’t see any animals at all. We began our morning with a run around the lake in Watson Lake. Oddly enough, the lake was not named Watson. Who knew?

Since our hotel with shoddy internet also did not have breakfast, we visited the grocery store across the street to buy a few things for breakfast. The grocery store was having trouble with its credit card machines, we had to pay cash, and it made me wonder if Watson Lake might not just exist outside of the influence of the rest of the world. Maybe we escaped some kind of technophobic cult. Then again, maybe not.

We had a really short drive today. We left after 9am and finished up by 3pm. Right out of Watson Lake, we drove through more of the Canadian Rockies. They looked very much like they did yesterday, but the sky was overcast and we had more difficulty getting pretty pictures this morning. It was a pretty quiet morning, save for a few bridge stops. The first bridge we photographs was outside Teslin, and was quite large. It was pretty cold in Teslin, and we had to dig out sweaters for Mom and me.

When we finished looking at the bridge, we stopped on the other side in the town of Teslin to rest and look around. They had a cute little souvenir shop, and we bought a few little souvenirs and spent some time looking around and walking the dogs. They had been in the car all morning, and they were ready for a break.

About an hour later, after more driving through the mountains, we stopped at a little spot called Johnson’s Crossing. It had a small store and bakery, gas, and a campground. It was just past another bridge, which of course we stopped to photograph. We went underneath this one for our pictures, so we ended up with a neat view of the underside of the bridge.

We also had lunch at Johnson’s Crossing. It doesn’t look like much of anything, but don’t let its looks fool you. It was delicious and quite nice inside. We weren’t the only ones getting sandwiches and other things there, either. It was a popular little spot in the middle of nowhere.

After a few podcasts from Radiolab and Stuff You Should Know, we ended up in Whitehorse without any further incident. This town feels huge after our last few destinations. It has a Walmart (which we visited) and everything.

Once we’d dropped our stuff off at the hotel, we went and checked out the town. The first thing we found was the dog park that I had found in the town while preparing for the trip, so we stopped by to get Ripley and Sabre a little exercise.

The Park is called Canine Bluffs and it is a fenced off-leash dog park here in Whitehorse. From what one of the other visitors told us, it has only been around for about a year and a half. The park was great. It’s decently sized, and sits amongst the trees on a little hill at the back of a park for people. When we arrived, it was empty.

We had a really good time. Ripley tore around the park in large circles like a maniac for the first fifteen minutes of our visit, and Sabre delicately sniffed the ground and the trees. Ripley gulped down gobs of water and generally had a fantastic time. Towards the end of our visit, two other dogs dropped in, and Ripley enjoyed alternately running from them and trying to play with them, since she is a complicated girl.

She was exhausted when we got back to the car, but her day wasn’t over. When we left the park, we drove over the the S.S. Klondike, which is a steamboat beached beside the river here in Whitehorse. From what I understand, for a long time, the only way supplies came to Whitehorse was by steamboat.

The boat itself was pretty cool. Ripley and I wandered around taking photographs with the digital camera while Mark played with one of his film cameras. Unfortunately, the boat was closed, so we weren’t able to look inside or visit the information center alongside it. The view of the river from the boat was fantastic, and we sat around and enjoyed it for a little while. The river was moving impressively fast. I wouldn’t want to fall in, for sure. I bet it was really cold.

After our touristy moment, we checked out the local Walmart and drove around the town a bit more. Nothing else cried out to be photographed, so we headed back to the hotel and started some laundry. We washed Ripley’s blankets, and in a few minutes, we’re going to wash Ripley herself. It’s about that time. Adventures make for a stinky puppy.

Mark and I had dinner at a local Chinese restaurant, and my parents had food from the restaurant in our hotel. Tomorrow morning we’re going to get up early and run the trail along the river. It should be a gorgeous view. I’m sure Ripley will have a blast sniffing around. It’s light here until after 10:30, and the sun will be up long before we get out of bed. I hope our curtains block out the light reasonably well.