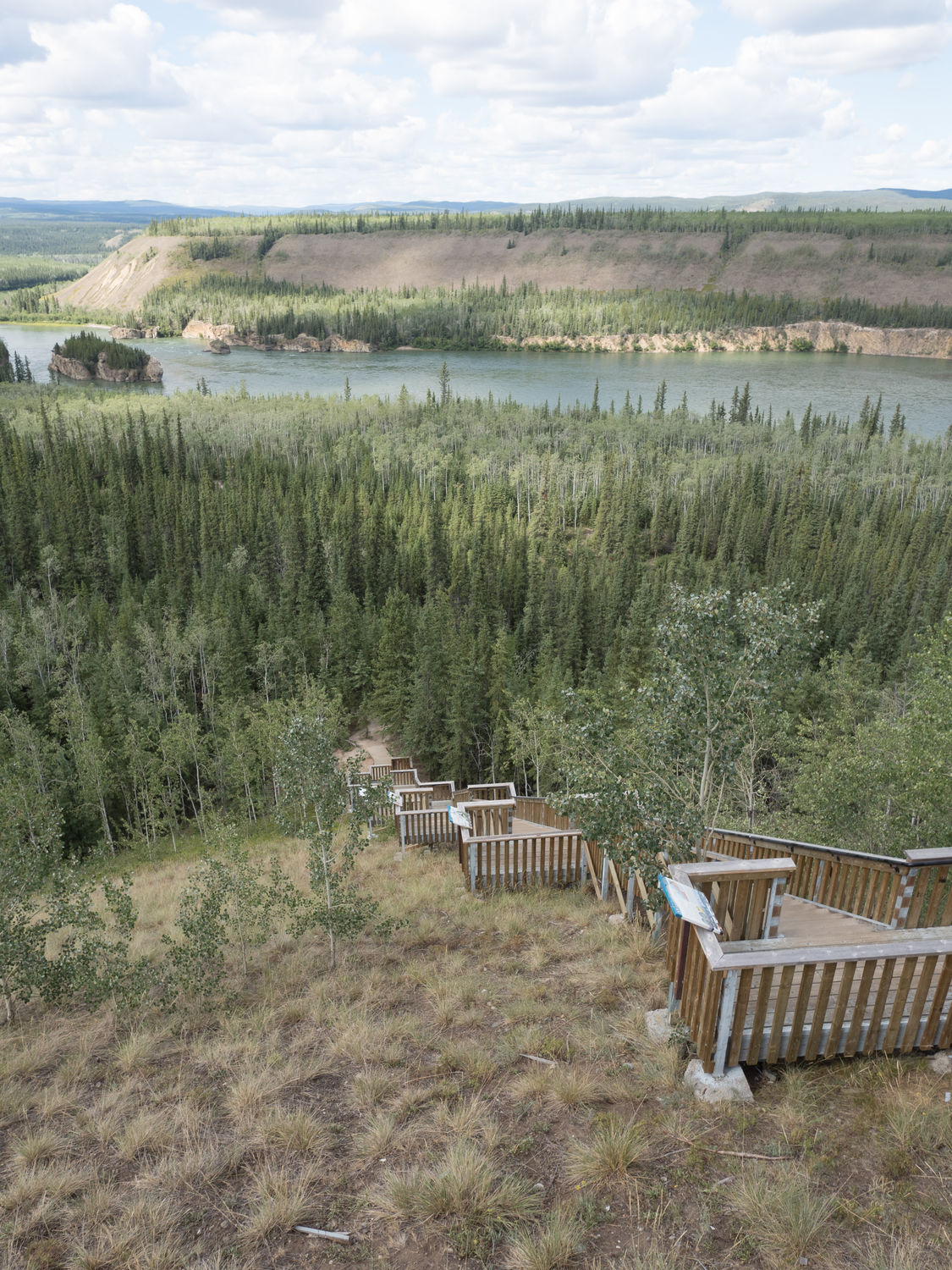 We’ve been trailing along with the same bus from Missouri for three days now. We were just sure that when we got off of the Alaska Highway today to take the Klondike Loop, they wouldn’t come with us. But it wasn’t but a couple of hours into our trip and there they were, and we had to rush to beat them to the bathrooms on a pit stop.

I’ll start at the beginning of the day, though, so everyone can follow along. I’ve been having some terrible issues with the internet for the last several days, so it is nice to finally have a decent connection. Hopefully everything in this post will go up as scheduled.

Our morning started at 6am with a scramble to upload some pictures before everyone else got online and slowed down our hotel’s internet. By 6:30, we were finished and dressed for our run, so we walked out to the Millennium Loop Trail that went around the Yukon River in Whitehorse.

The trail was a 5k, and Mark, Mom, Ripley, and I started out together. It wasn’t long before Ripley and I pulled off, and Mom trailed at the end, as she was just walking. Mark, Ripley, and I made the entire loop, and when we got to the end, we couldn’t find Mom. We ran back in both directions looking for her, trying to figure out where she was.

Of course, we weren’t very smart. It turns out she had walked as much as she wanted to, and she turned around and headed back to the place where we started, which wasn’t on the loop trail but was near our hotel. She was waiting there when we finally found her, and the first thing she said was, “What took you so long?”

With our party reunited, we headed back to the hotel and got ready for the day. After a quick breakfast at Tim Horton’s, we headed out on the Klondike Loop, breaking with the Alaska Highway.

The road was much worse, but the scenery was lovely. It was pretty mountainous, so the roads wound along like a ribbon through the trees. The trees were actually pretty stunted, and they were mostly small and narrow.

We stopped briefly at a grocery store in Carmacks, which is where we first ran into the tour bus today. We’ve seen them at least a dozen times by this point, I think. The last two nights we’ve stayed in the same hotel. We took some pictures of another bridge on the way out of Carmacks before heading on down the road.

About 15 minutes out of Carmacks, we came across a scenic view area at Five Finger Rapids, so we pulled over and took some very nice pictures of the Yukon River from a little lookout deck. There was a path that led down the the river, but we didn’t walk down. It was a neat place, though, and seemed popular. Lots of cars were stopped.

Our next bridge was in Pelly Crossing, and we took some photographs as we went across. It wasn’t as interesting as some of the other bridges we’ve seen, but the area itself was interesting. Pelly Crossing houses the Selkirk First Nation. The area used to house a fort called Fort Selkirk, but it is no longer in use.

The Selkirk people have a museum and cultural displays around a a general store that houses almost everything the community needs to operate. The museum was very cool, and they had lots of replicas of traditional clothing and gear that were quite interesting. We even saw a handmade boat made of stretched moosehide. The woman running the museum told us they were going to launch it soon, but she didn’t want to be the one in it when they did.

We stopped for lunch around 2pm (a little later than we’d intended) at a picnic table in Stewart Crossing. We all had sandwiches and my parents tried ketchup-flavored potato chips for the first time. They are very popular here in Canada, and Mark and I have had them before. They aren’t bad at all, but I can’t say I crave them or anything when I’m not here.

Around 5pm, we ended up in Dawson City. Our hotel is just on the outskirts, and it is attached to an RV park. We are staying at the Bonanza Gold Motel, and it is a fantastic little place to say. The people are friendly, the room is large and clean, and the bathroom is wonderfully large. I would stay here again for sure. I know that it can be hard to find information about hotels that are this remote, so someone out there, if you stumble across this while wondering whether or not to stay at the Bonanza Gold Motel, do it. You will not be disappointed.

When we got here, Mark mentioned to the ladies working at the office that we had Sabre with us, and they both wanted to come out and meet her. They have miniature dachshunds too, and they took Sabre and my mom off to meet them. They cooed over Sabre, of course. She’s a cute little thing, and her coloring is somewhat unusual.

The first thing we did when we made it up to the room was clean the cooler. The cooler hasn’t been cleaned since we left Texas, and the water was starting to smell a little sour. We dumped everything out and washed off all of the drinks and packages in the cooler. We’ll repack it in the morning. It’s nice to have it done already, so we don’t have to worry about it tomorrow.

After getting everything in order at the hotel, we drove towards town and took a tiny side road that said it had a scenic view. The road was called Dome Road, and it took us to the top of Dome Mountain. The lower part of the road was entirely gravel, and several of us in the car were anxious about gravel and a high grade. Regardless, we all survived, and the view was pretty spectacular.

Dawson City is a mining town, and apparently they mine for gold, which seems weird to hear about nowadays. We had an excellent view of the mines, the river, and the city below. It’s a neat little road, and hats off to my dear husband for deciding that driving up it was a good idea.

Dawson City itself is adorably old fashioned. It is also somewhat hippy-ish, which really surprised me. It has more hotels than I expected for a community of about 1,800 people. It seems like it has almost that many dogs, given how many I saw while we drove through the streets.

Dawson City is built on permafrost, but they have been having some issues with the ice melting when it shouldn’t due to climate change concerns. They have to build their homes in a specific way to protect the ice from the heat of their house. Older buildings will shift and break with the weather changes. From what I understand, about 75% of the stores in town shut down for winter.

Did you know that the cabin that Jack London, the author of The Call of the Wild and White Fang, lived in the Yukon as a young man? Dawson City still has half of the logs from his original cabin, and they’ve erected them into a replica cabin here in town. The other half of the logs are actually in Oakland, Califonia, in another replica.

We visited the replica here. My parents didn’t even get out of the car. Apparently I was the only one that really cared about Jack London’s replica cabin. Does that make me a nerd?

It was raining a bit, so we headed to a pizza and pasta place for dinner. It actually served many things, from burritos to subs to lasagna, but it only had two tables. We took one of the tables and had wonderful pastas for dinner. Dad asked the owner if he’d make him some pasta and ship it back to Texas frozen. The guy thought that was pretty funny.

Tomorrow we’ve got an early ferry to catch out of town, and 100 miles of dirt road to traverse. We’ll make into Alaska not long after we leave in the morning. We’re almost there!