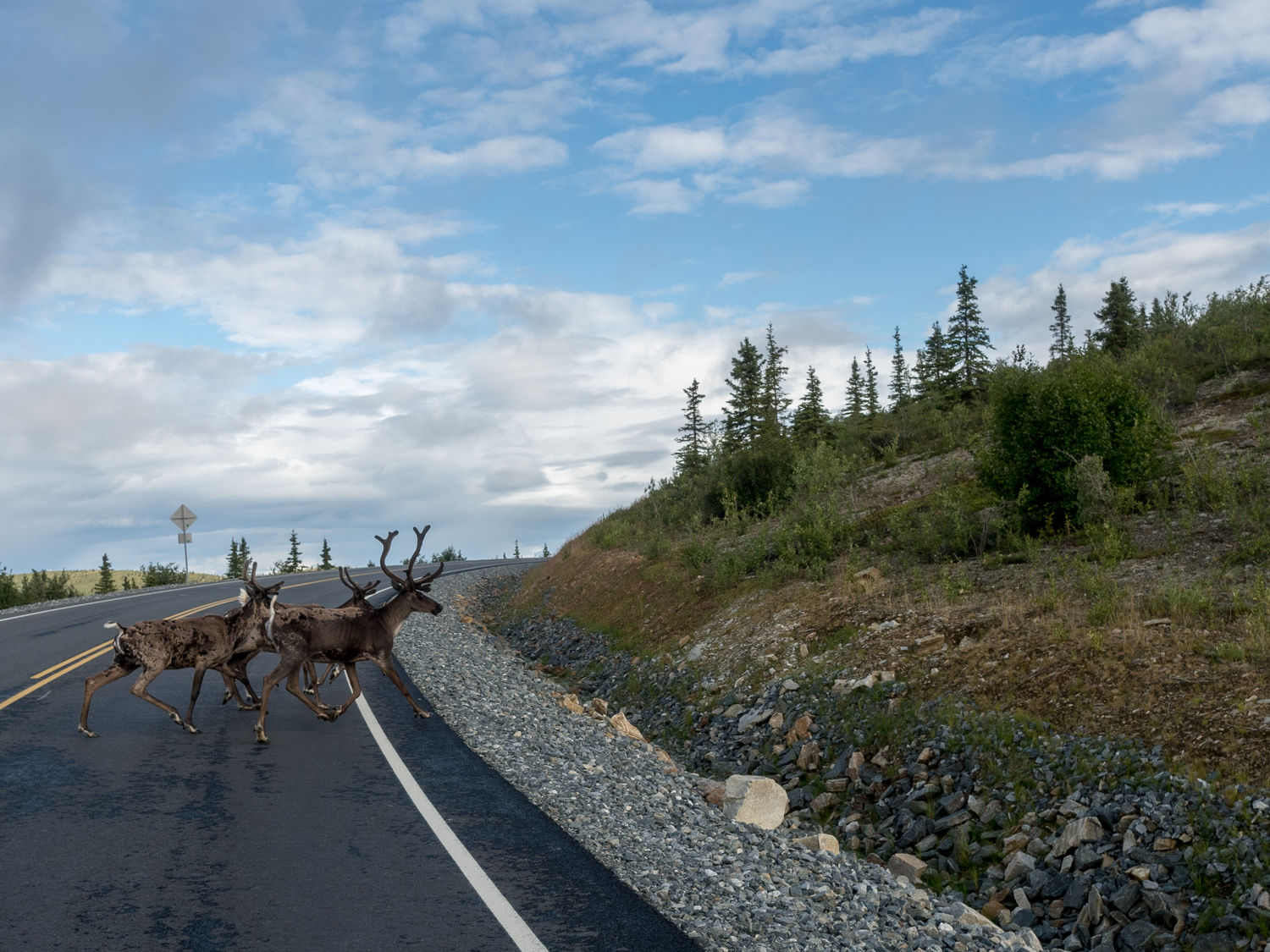 Caribou. So many caribou today. We had a very exciting morning, and a much more relaxed afternoon. We had so much fun. This was one of everyone’s favorite days so far.

We began our day at 5am and tried to get everyone showered and packed as soon as possible. We left as soon as we could and headed to the ferry terminal in Dawson City. The ferry only holds a few vehicles, and at peak times the wait can be as long as three hours. We couldn’t be late. When we got there, we were the only ones waiting for the ferry. It was around 6:30am.

The ferry actually runs 24/7 during the summer, so we didn’t have long to wait before the ferry came over to pick us up. During winter, the ferry doesn’t run at all, and most of the roads on the other side of the river are closed anyway. The ferry workers told us that by November, the river would be frozen solidly enough that they would simply drive on it to get around. I can’t imagine.

While we were waiting for it to reach our side of Dawson City, our tour-bus friends from Missouri parked behind us in the ferry line. Our Suburban and the tour bus were the only vehicles that fit on the ferry. If you were trying to fill it with regular vehicles, I imagine that it could only hold 3. I wonder if the traffic backed up later in the day.

Once we reached the opposite shore of the river, we were officially on the Top of the World Highway, which is a stretch of unpaved road that goes from the Dawson City ferry through the mountains to Jack Wade, Alaska. While that is the official end, it would feel more accurate to say that the road ends in Chicken, Alaska.

The road on the Canada side of the border is a firmly packed dirt that has been slicked down with oil and equipment. It is well-maintained for a dirt road, and the views are stunning. That said, it can be really scary. Dad and I are afraid of heights, and some of those hairpin turns without rails that look down over a cliff made us a little queasy. Mom was anxious, too. She told Mark to stop making “whee” sounds as we took the turns, because he shouldn’t be enjoying it so much. Everyone laughed and laughed.

As we made our way up the roads, the temperature dropped dramatically. It kept getting colder and colder outside. We even needed our blankets in the car. As a side note, when we switched the car to metric to drive in Canada, the temperature measurement also changed to Celsius. It’s a little funny to be converting from Celsius to Fahrenheit in your head to figure out just how cold you are.

With the dropping temperature, we started to see more animals. Since the border crossing didn’t open until 9am on the Canada side, we were some of the first people on our stretch of road. We started out small, with a rabbit. Then, we saw an arctic fox wearing his summer brown. He stared at us for a few seconds from his perch on the side of the road before darting into the underbrush.

And then we saw the caribou. It started with just a handful, and we weren’t even sure what we were seeing. They were standing in the middle of the road, and we realized they were caribou. We took some pictures and moved on, thinking we’d seen what we were going to see. Boy, were we wrong.

We finally made it to the border crossing into Alaska minutes before it opened. Right at the crossing, the time changed. It was 8am in Alaska. According to a sign at the border crossing, it is, “the most northerly land border port in the USA.” We made it through without incident, and took some photos with the sign welcoming us to Alaska. It was so cold that we didn’t spend long taking the pictures.

Let me just say that caribou are about as awkward an animal as I have ever laid eyes on. They have fluffy winter coats that are shedding, and their hair is darker and sleeker underneath. The shedding gives them a ridiculous, patchwork appearance, and they run like idiots. It’s almost like they’ve never used their legs before. It is embarrassing to witness. It was hilarious to listen to them clopping along in front of us on the pavement. A herd of soft-hooved goofballs trotting down the highway right in front of the thing they are trying to escape. Priceless.

I was really excited to see all of the babies. They are adorable and ridiculous as well. They look like the stuffed toys you see in the gift shops here: sort of fluffy and huggable. Somehow I bet Mark won’t let me keep one.

Ripley and Sabre lost their minds a couple of times watching the caribou run past the Suburban. Ripley whined and yipped when they were close, and she panted almost hysterically the rest of the way down the mountain. Sabre tried to jump out of the window after them while Mom was taking a picture. I told Mom that little Sabre was feeling her wolfish roots.

Anyway, we drove down the highway on high alert, trying not to hit any caribou and miss any photo opportunities. Once we moved off of the pavement, we found the dirt road on the Alaska side to be in much worse shape than the Canada side. Potholes and rough ground abounded.

While peering down the road checking for caribou, I spotted something standing in the road that didn’t look like a caribou. As we got a little closer, it turned out to be a baby moose. She ran off the road before we could get a picture, down the side of a sheer cliff where I can only assume her mother was waiting. She was bigger than the caribou, but obviously very young.

As we descended from the mountains, the animal sightings slowed down to nothing. We curved around the rutted dirt roads for quite a while, weaving past little side roads where people were just camped there on the side of the road. We saw at least one horse trailer, and quite a few campers and dogs.

Finally, at the bottom of the mountain, we arrived at the mining town of Chicken, Alaska. The whole town is chicken-themed, because obviously it has to be. One of the local mines is even called, “Lost Chicken Mine.” I wonder if anyone really lost a chicken in there.

Chicken is actually pretty neat for what I would call barely even a community. The gas station is the only building in the area with flush toilets. To be clear, the gas station, which also runs the RV park, is about the only thing in the town. It has a cute little gift shop. The lady working behind the counter there told us that she was a retiree from Florida, and she worked in Alaska during summers.

From Chicken, the road was once again paved. We followed it out to Tok, where we grabbed lunch at a little place called Fast Eddy’s. It did go pretty fast, and the food was good. They had vegetarian food, which is great for the only restaurant in an entire tiny town.

We took pictures at the little state park area that marks the end of the Alaska Highway there in Delta Junction. Dad and I took pictures with giant metal mosquitos. Mark told us to look like we were afraid of them, and Dad did a great job. In fact, he did hilariously well, so I don’t look scared at all in the pictures. He looks scared and I’m laughing so hard I can’t breathe.

It was raining there, by the way. It rained all the way into Fairbanks. It has still rained every day thus far, if you’re wondering about that. We’re keeping count for Mom.

Fairbanks wasn’t far ahead, and we stopped at our hotel and rested for a bit before heading out to look around. It was too wet to take Ripley to the dog park, and too cold to walk around. We took some pictures of the town from our car, and stopped at an REI for a carabiner. Mark and I were super excited to see an REI all the way up here.

It’s Mom’s birthday, so we took her out and bought her cupcakes to celebrate. Mark and I gave her a birthday card. We couldn’t find the book she wanted for her birthday, so unfortunately so far she’s had to do without a present.

When we finished there, we headed back to the hotel to heat up leftovers from last night’s pasta for dinner. We sang Happy Birthday and had cupcakes a little later. Tomorrow we only drive for two hours down into Denali National Park. It looks like the weather should be better for us, and we’re looking forward to driving around the bits of the park that we can tomorrow.