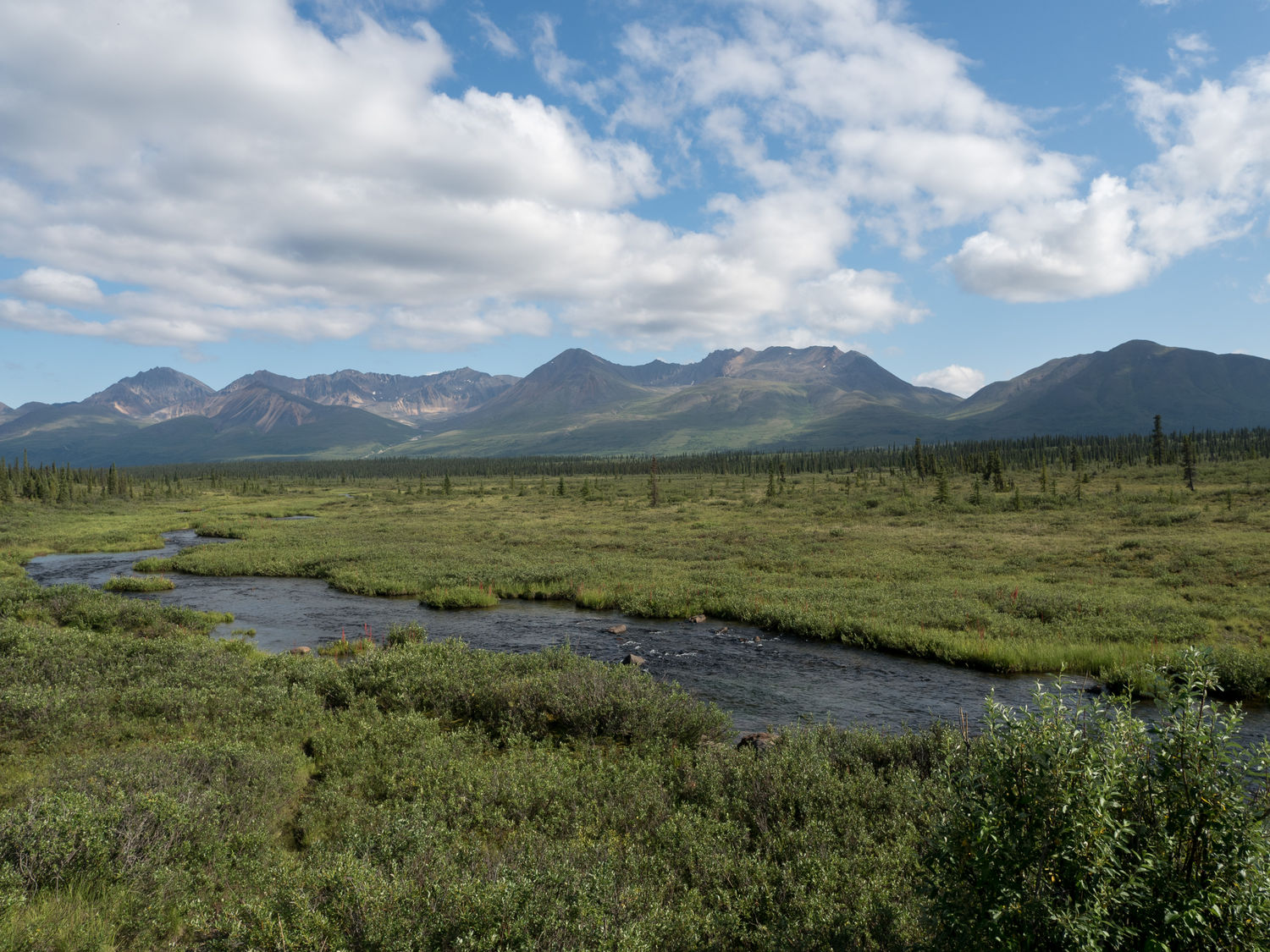 Today was our first day in Denali National Park. We’re also staying in a hotel tonight that we’re going to be in for more than one night. Up until today, we haven’t spent two nights in the same place.

This morning, we tried to sleep until 6:30am since we had a short day, but that didn’t work out. We woke up a little before and started to move around the room a bit. Mark, Ripley, and I got dressed and headed out to run. My parents took the car out to get the oil changed. Apparently we’ve driven it far enough that it’s that time.

Our running trail this morning wasn’t great. It was supposed to follow the Chena River, which winds through Fairbanks, but the reality was that it mostly followed city streets that happened to be somewhat close to the river. It wasn’t ideal, but it did the job. It was chilly, but it wasn’t raining, so we had a good run.

When Mark and I got back, we showered just in time for Mom and Dad to get back from changing the oil at the local Walmart. Once everyone was ready, we headed out at nearly 10am. The relaxed pace was nice, and everyone seemed happy for the break.

We stopped at a local bagel place for breakfast. I can’t speak for everyone else, but I had a rosemary olive oil bagel with garden veggie cream cheese, and it was delicious. My apple juice that I got with it was bottled in Plano, Texas. I found that a little funny.

From Fairbanks, we headed south towards Denali National Park. We read in the newspaper this morning that prior to today, there’s been horrible construction on the road leading from Fairbanks to Denali. The traffic was so bad that tourists were missing their bus tours and tearing up their cars, and the locals were all late to work.

You can only drive 15 miles into Denali in a personal vehicle. The buses go the rest of the way into the park. We drove the 15 miles that we could to look around and take some pictures. It didn’t take long, but I think we got some great photos.

The part we got to see today was pretty tame. The sky was still cloudy and the air was cold, but not quite as cold as yesterday in the rain. We saw mostly trees and distant mountains. Everything is so green. I guess the plant life here has to work extra hard since the growing season is so short.

We didn’t see any animals today, which was really surprising. I kept thinking we’d see something, even just a rabbit. The wildest thing we saw all day was the dogs that barked at us from their car in Fairbanks.

When we finished our drive, we headed back down to the little town area that’s outside Denali National Park. It is mostly hotels and gift shops, with a few restaurants and touring operations.

We went into several gift shops and bought some T-shirts and such. We also tried some fudge in one of them, and I was shocked when Mom didn’t buy any. She has a weakness for little boxes of fudge. It seemed like she bought it at all of the gift shops we visited when I was a kid.

After that, we decided we needed some lunch. My parents ordered pulled pork sandwiches and Mark and I got burrito bowls from a little coffee shop amidst the gift shops. Our burrito (bear-rito, as the menu said) bowls had chimichurri on them, which is an Argentinean condiment that we’d never had before. It was delicious. I will be making my own when we get back home. I can only imagine all of the wonderful things we can put it on.

Lunch finished, we drove on down the road to find our hotel. It was around 3:30 or so, and our hotel was about 30 minutes away in Cantwell. We had a little difficulty getting into our hotel, which is pretty small, but we finally managed.

While we were waiting, we drove briefly down a road called the Denali Highway, which connects Cantwell and Paxson. The Denali Highway sort of bisects the two major highways on either side of Alaska. From what I understand, most of the road is dirt. It wasn’t in great condition. We saw a gorgeous little lake back there, though, and we were all glad we made the drive.

The room we ended up with in our hotel is cute and the view from the room is stunning. We should be fine staying here for the next two nights, despite some doubts we had when we first arrived. The curtains aren’t very thick, so we are going to see all of the light that’s leaking through. Currently our sunset is around midnight and sunrise happens around 4:30am. It never gets truly dark, anyway.

We also visited Sabre and Ripley’s baby sitter this evening. A woman that works at the local RV park is going to watch them while we take our bus tour through Denali tomorrow afternoon and evening. She was very nice, and seemed excited to take care of our critters.

Once everything was sorted out for the day and we were all unpacked, it was nearly 7pm, so we headed out to look from some dinner. There’s not much around here, so we ended up at the local cafe. We were the only diners there.

Mark and I had to get grilled cheeses and fries, since they didn’t have much else that was vegetarian. Dad had a truly giant chili dog. The fellow working there was very friendly. The back of the menu had a photograph of his great-grandfather here in Cantwell. It looks like his family has been here for quite a while.

Tomorrow we take a bus through Denali from 1:30 to 9:30, so I’m not sure when tomorrow’s post will go up. I promise not to miss it, because I bet we get some awesome pictures. Cross your fingers for us and hope we can see the top of the mountain and it isn’t hidden in the clouds!