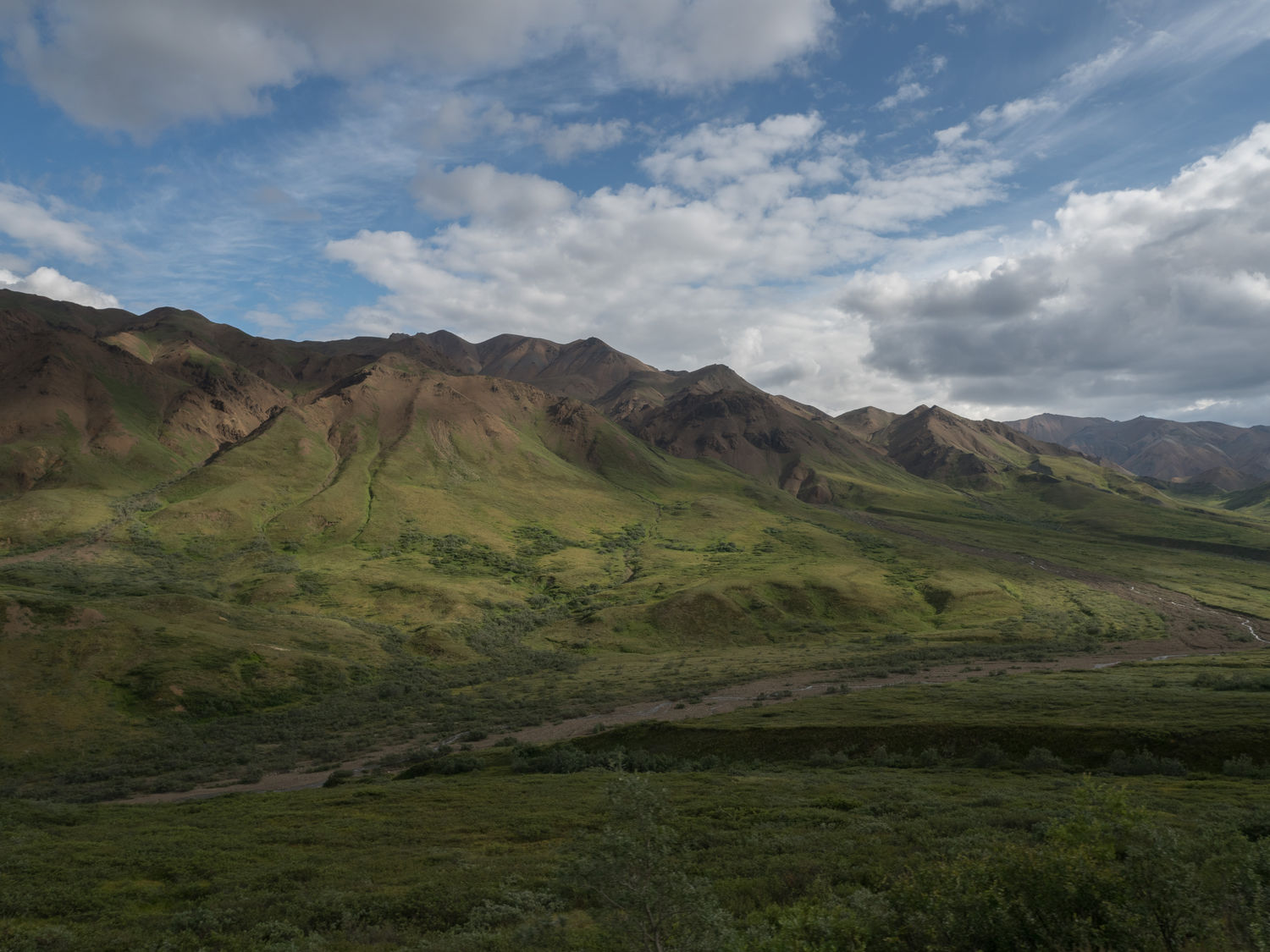 Today was a really big day. We did our bus tour of Denali, and boy did we have a good time. It was a really long day, too.

We woke up around 6am and headed out to get some exercise. Mark, Ripley, Sabre, Mom, and I played around a local RV park and runway for our workout. We even got to see a plane take off. Dad stayed in the hotel room and slept.

When everyone was tired, we headed back to our hotel and showered and dressed for the day. For the first time on our trip, everyone wore jeans. We also dug out our jackets in preparation for our cold bus tour.

It actually turned out to be a pretty warm morning. The sun was shining and we didn’t see too many clouds. It was much warmer than yesterday, and some of us started to regret wearing long pants. We would be grateful later, but we didn’t know that yet.

We headed back out to the tiny cafe from last night for our some food. We had a nice breakfast, and my parents practically had half of a pig with their eggs because Mark and I gave them the bacon that came with our plates. We were stil casically the only people there. I guess they make enough money on their RV park and runway that the money from the cafe is trivial. Or maybe the little bar next door really rolls in the dough. Who can say?

When we had breakfast, we left Ripley and Sabre in the car. It was a warmer morning, but it was still only 60 degrees, so there wasn’t any problem with letting them wait in the Suburban with the windows down. When we came back to the car though, there was an empty bag in the front passenger seat, and it took us a minute to figure out what had happened.

You see, we brought along a little bag of Ripley’s food for the babysitter to give her for dinner, and Sabre had crept into the front seat and eaten it all while we were gone. It was more food than Sabre gets in two days, I think. I’m still not even sure how she got up there. She must’ve been really motivated.

I feel really bad for little Ripley, sitting there in the back, listening to Sabre eat her food. She was fastened into her seatbelt, so she couldn’t do anything about it. When we found her, Sabre had a tight belly and a satisfied look on her face. We had to drive back to the hotel and get Ripley some more kibble. I gave her two treats to make up for listening to Sabre eating her kibbles.

With new food in hand, we took the kids down to the babysitter for the day. The woman was very nice, and she was pretty excited to take care of the critters. We unloaded Ripley and Sabre and their gear and talked for a minute about what they’d need for the day. The babysitter was taking them for a walk when we left. It looked like she was learning something we’ve all learned on this trip: it’s nearly impossible to walk those two together.

We hopped back in the car without the dogs and fretted about how they’d be without us for the day. We knew they’d be fine, but sometimes you still worry.

The first thing we did upon arriving in Denali was sign in for our bus tour. It turns out that the computers in the park had been down for four days, and they had a very limited ability to look stuff up and move things around. Luckily we had our reservation number, and we were easy to take care of. We even got a refund of $40 on our tickets after presenting our annual National Park Pass. The clerk had to hand write our ticket, and she sounded pretty miffed about the computers. I would be too. Regardless, she was nice and gave us some tips about the food and where to sit.

Our bus tour didn’t leave until 2:10pm, and it was only around 11:45, so we went back into the little town outside the park to look around. We walked out on a long bridge over the river and watched the gray water rushing past at an impressive speed. I can’t imagine rafting on that, but clearly people do it. The water must be just freezing.

Despite what I can only assume was icy water, the air temperature was almost hot. It was perhaps 75, and Dad and I were whining about wearing jeans. We were too warm in our long pants, and almost regretted wearing them. It really was a beautiful day. If we hadn’t been going to higher elevations, it was definitely shorts weather.

We also drove up to a hotel that was way up on the hill to take pictures of the town and the surrounding mountains. The road winding up to the hotel had silly signs along the road, like one that said, “Wet when raining,” and another that had a picture of a mosquito carrying a person away. We were amused, and the views were great. Maybe next time we’ll stay somewhere a little fancier like that.

With some time left to kill, we headed back into the town and looked at a couple of more gift shops and searched for extra snacks and water. We ended up buying ice creams for lunch, since we were still full of breakfast and didn’t want another meal before the drive.

It was still a little early, but we wanted to get good seats on the bus, so we headed back to the Wilderness Access Center to sit and wait, so we could be the first in line. It turned out that it didn’t actually matter what we did. The bus had filled up with most of its passengers at the previous stop, and we were relegated to the back with the other 10 people waiting at our stop. We were sad that we’d bothered to wait at all, since it hadn’t mattered.

Off we went, back past the 15 miles of park we’d driven the day before and up into the restricted section of the park. A park ranger hopped on the bus at the entrace and gave us a brief talk about the park and what we’d see. Our bus driver did most of the talking, though.

The view didn’t change too much at first, but the roads were dirt and they were very narrow and winding. I can see why they limit access. We still saw a bunch of bicyclists and personal vehicles. Apparently you can get licenses for various things that allow you to take you vehicle up into the park. Mark and I were wishing we’d gotten a photographer’s license, so we could’ve driven ourselves into the park.

At any rate, we took our bus up to the first stop, where we got off to use the restroom and take some pictures off of a scenic deck area. While we were out taking pictures, we heard that we were going to have to stay at the stop for 30 minutes. We were really confused, so we headed back over to the bus to find out what was going on. It turned out that one of our tires had blown out on the way up. Considering the construction we drove through, I guess we shouldn’t have been surprised.

We watched several other buses go by and ate our snacks while we waited. At least the view was nice, though the sun was pretty rough. We had to abandon our seats by the lokout over the riverbed and head to the shelter closer to the road before we finally left.

Our new bus was just like the old one, and we sat in the same seats. The windows were cleaner, which was nice. It wasn’t long before a returning bus stopped us as they went past to tell us that they’d seen a grizzly bear. The bus went along up the road to the area where the other group had seen the bear.

The first thing we saw was actually a pair of hikers, down in the valley where we’d been told to look for the bear. Everyone was a little nervous for them until we spotted the bear on the other side of the road, about halfway up a big hill, eating berries.

The bears in Denali are a lovely golden blonde on the top, like a golden retriever. Their chest and stomach is a darker brown. They almost look like girls with bad highlights. This one was pretty far away and on the wrong side of the bus from us, so we didn’t really get an photographs. Mark has a lovely shot of all of the other passengers leaning towards the right side of the bus, trying to snag a picture of the bear.

From there, we saw a bunch of caribou on the way up. Caribou after caribou, and everyone wanted pictures of each and every one. The four of us were not impressed by one or two caribou half a mile away. We had them trying to climb into our car with us a couple of days ago, so caribou felt like old hat. “Eh, more caribou.”

The park is beautiful, I have to say. We got some great scenic shots of the mountains, hills, and valleys that we traveled through while the others took grainy shots of caribou. It is a very striking place, with all of the green grass and riverbeds nestling amongst the mountains. The snow-capped mountains in the background really set everything off. The park is in full bloom, and we saw wildflowers everywhere.

We did not get to see the mountain. By the time we made it up to the turn around point in the road, the mountain was covered in clouds. With the clouds in place, it is almost totally invisible. Unless you know what you are looking for, it’s impossible to even guess where it is. We were disappointed, but everything else had been wonderful. We were told that only 15-30% of park visitors see the mountain.

We spotted a few rabbits, too, and a couple of Dall Sheep (really far away) on the way out. It rained a bit on the bus, and as we were leaving the park, we could see the rain pouring down on the mountains in the distance.

Everyone was exhausted when we finally got off the bus at 9:15pm. We were sore, hungry, and sleepy, to name a few. Unfortunately, we still had to drive back to Cantwell to find our beds for the night.

We stopped and picked up our fur babies, who were in good shape and happy to see us. The babysitter told us that they’d had a good day, and said she was surprised by how much energy Ripley had. We laughed. There’s no doubt that Ripley is a handful.

With that, we drove the final mile back to our hotel. Just as a reminder, it was still fully light outside, despite being ten o’clock at night. The sky was a little cloudy, and looked almost like early dusk.

Tomorrow we head through Anchorage and down to Seward for a boat tour the following day. One of the other tourists on our bus had taken the same boat tour, and they told us that they saw all sorts of wildlife out on the boat. She had a picture of an orca on her phone! We’re really looking forward to it.