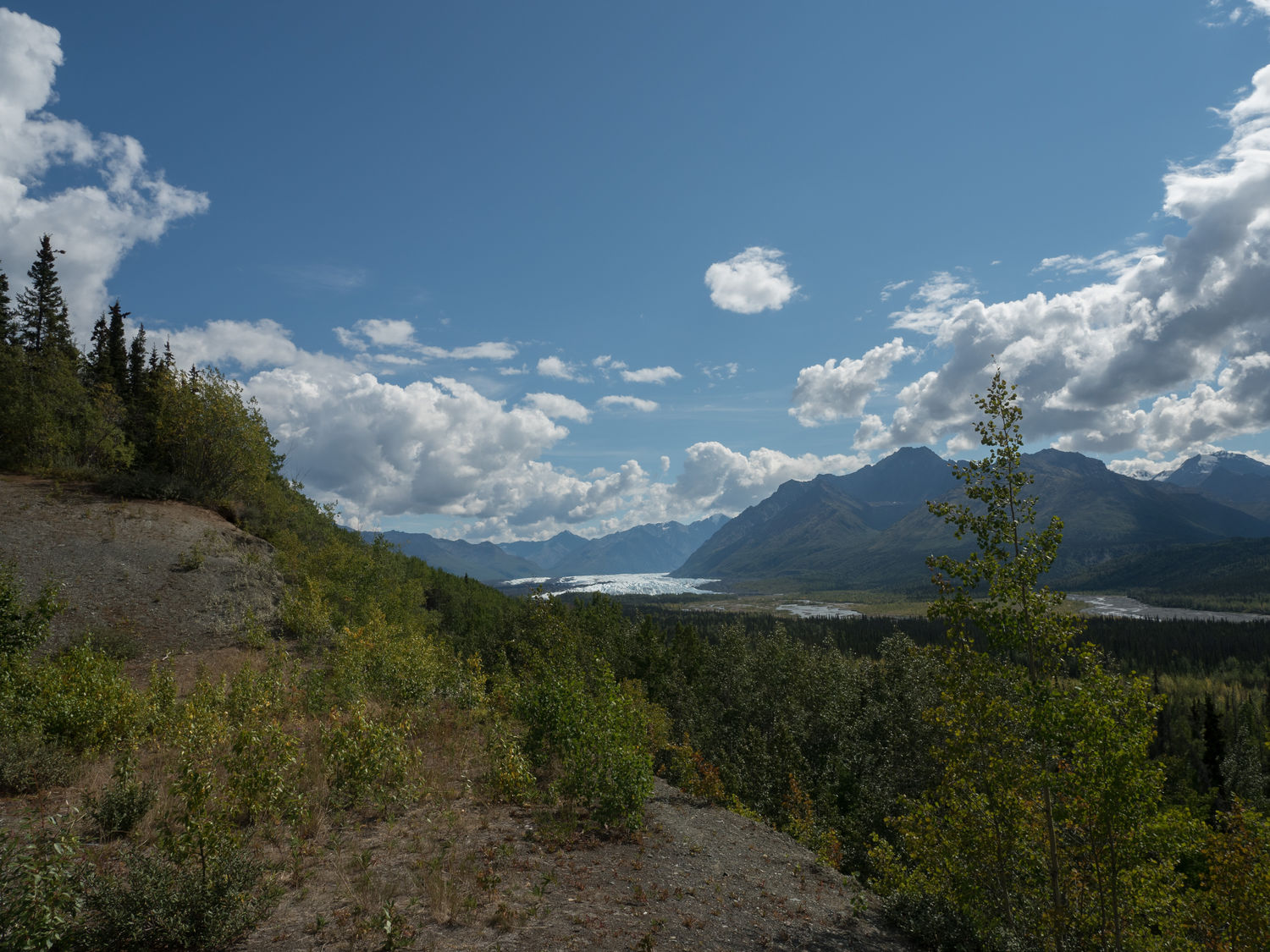 Today was mostly a driving day. It was a very scenic trip, so it made the day go by a little faster.

We started our morning in Seward at 5am with a run along the coast on the Iditarod National Historic Trail. The part of trail ran through the middle of town, which wasn’t ideal. Lots of fisherman and boaters were out early, so there was a lot of traffic around the docks. It was way more traffic than you normally see so early.

When we finished our run, we headed back to the hotel and showered and got ready for the day. Mark and I had purchased cereal for our breakfast, but when we went to eat, we realized we were out of milk. Poor planning on our part, but we were hungry, so we decided to head out to a local cafe to grab something to eat on the way out of town.

It was an awful experience. The person taking our order was very dense, and we probably repeated it 6 times before he seemed to get it, and even then we weren’t sure that he’d figured put the we wanted a breakfast burrito and an egg and cheese sandwich. Complicated, right?

Mom ordered a cinnamon roll and a brownie (for later) and went out to the car. Dad had eaten sausages earlier while we were out running. I followed Mom to the car with our juices. She started to eat her cinnamon roll, and it was just awful: dry and hard and barely flavored or iced. We all tried it, and it was bad. She decided to put it away and maybe find somewhere to heat it up for later, to see if that helped. Since she was still hungry, she decided to eat her brownie. It was ice cold. Frozen. She wasn’t a happy camper.

It took 30 minutes for Mark to come back with our burrito and sandwich. That’s right, our to go order took 30 minutes. I joked with Mark over iMessage while he waited that we’d never be going to that restaurant again. I guess they stay in business because the tourists don’t know it’s bad. I bet the locals go somewhere else.

Once We finally managed to get out of Seward with our barely passable breakfast, we headed back up to Anchorage. The weather was just beautiful: clear and sunny with only a few puffy clouds. It was even hot inland- almost 85 in places.

We made a grocery stop in Anchorage, since it’s the last time we’ll see real civilization for several days. We were too early for lunch, so we waved at Qdoba as we went past. We still didn’t wash our car. It’s a dirty mess on the outside.

Our trip today was basically a big curving arch from one coastal city to another. Past Anchorage, we curved up through some mountains with a river valley off to our right. We stopped a couple of times to take pictures of the scenery along the road. It was a great view.

By around 1:45, we were starving and in the middle of nowhere, so we needed to find a place for a picnic. Looking in The Milepost, I saw that we were coming up on Matanuska Glacier State Recreational Site. At the time, we still couldn’t see the glacier, so we weren’t sure where it would even be.

When we got to it, it was quite a bit different from the other glaciers we’ve seen. This one came down from between two tall peaks, like the others, but it was way out in the middle of a valley instead of off a cliff or into the ocean. It looked like a tall ice pathway. It currently stretches for 27 miles, but around 18,000 year ago, it was 70 miles long. It was impressive for sure.

Once we had our glacier pictures, we drove over to the other side of the recreational site to a picnic table to make our lunch. Ripley and Sabre were tied to the table, and we all had a late lunch mini-feast with all of our fresh groceries from this morning. The area was lovely even without a view of the glacier, and the trees were mosquito-free, which was perfect. It was still sunny and hot, and the trees even provided some nice shade.

After lunch, we drove for about another hour and a half to reach the visitor center for Wrangell-St. Elias National Park. We didn’t actually visit the park today, because it was out of the way. We’re going to visit a bit of it tomorrow.

All the way in, we had an excellent view of Mt. Drum, which is a stratovolcano with a peak at 12,010 feet. Off to its right (from our perspective) was Mt. Wrangell, which is a shield volcano. Both of them belong to the Wrangell Mountains. It was beautifully clear, and we could see for miles around. Mt. Drum was framed by the highway, so that was really cool.

The National Park visitor center wasn’t much to look at, although it did have a fishwheel, which is a historic way of trapping fish. We bought a sticker and some postcards, but no t-shirts. They were $22 and pretty boring to look at. We took a family portrait at the national park sign on the way out. Tomorrow should be better for Wrangell-St. Elias.

Past the visitor center, it was about another hour and 45 minutes to Valdez. We stopped several times on the way down the highway, because the views were stunning. The air was a little cooler  as we got closer to the coast.

Just outside of Valdez, the road went through a deep valley with waterfalls coming down on either side of the road through massive green hills. It was gorgeous, especially since the sun was still so high. Tomorrow we will get a few more pictures of the glacier outside of town. Today it was too backlit by the sun for any pictures at all.

We stopped by our hotel and dropped off our stuff in Valdez before we headed out for dinner. As we were driving, we realized we were seeing a ton of colorful bunnies. They looked like pets. It turns out that Valdez has a huge feral rabbit population. They are fat and adorable and super sweet. People obviously feed them.

Dinner wasn’t anything spectacular, but afterwards we took a little tour of the town. We saw wild blueberries, rusted out boats, and some really big and pretty homes. We stopped by the docks and drove by the seafood factories, and we checked out a beach or two while we wandered around.

When we finished driving around, we stopped by a small group of bunnies to take photographs. The bunnies would let me walk right up to them for pictures. They clearly wanted me to feed them, and I know they would’ve let me pet them, if I’d been brave enough. I wasn’t, though. Goodness knows I don’t need to somehow get bitten by a bunny.

With that, we came back to the hotel for the night and had some fudge snacks. Tomorrow is a long day, so we’re getting up early and getting out of here. We’ve got lots of plans for pretty pictures in the morning.