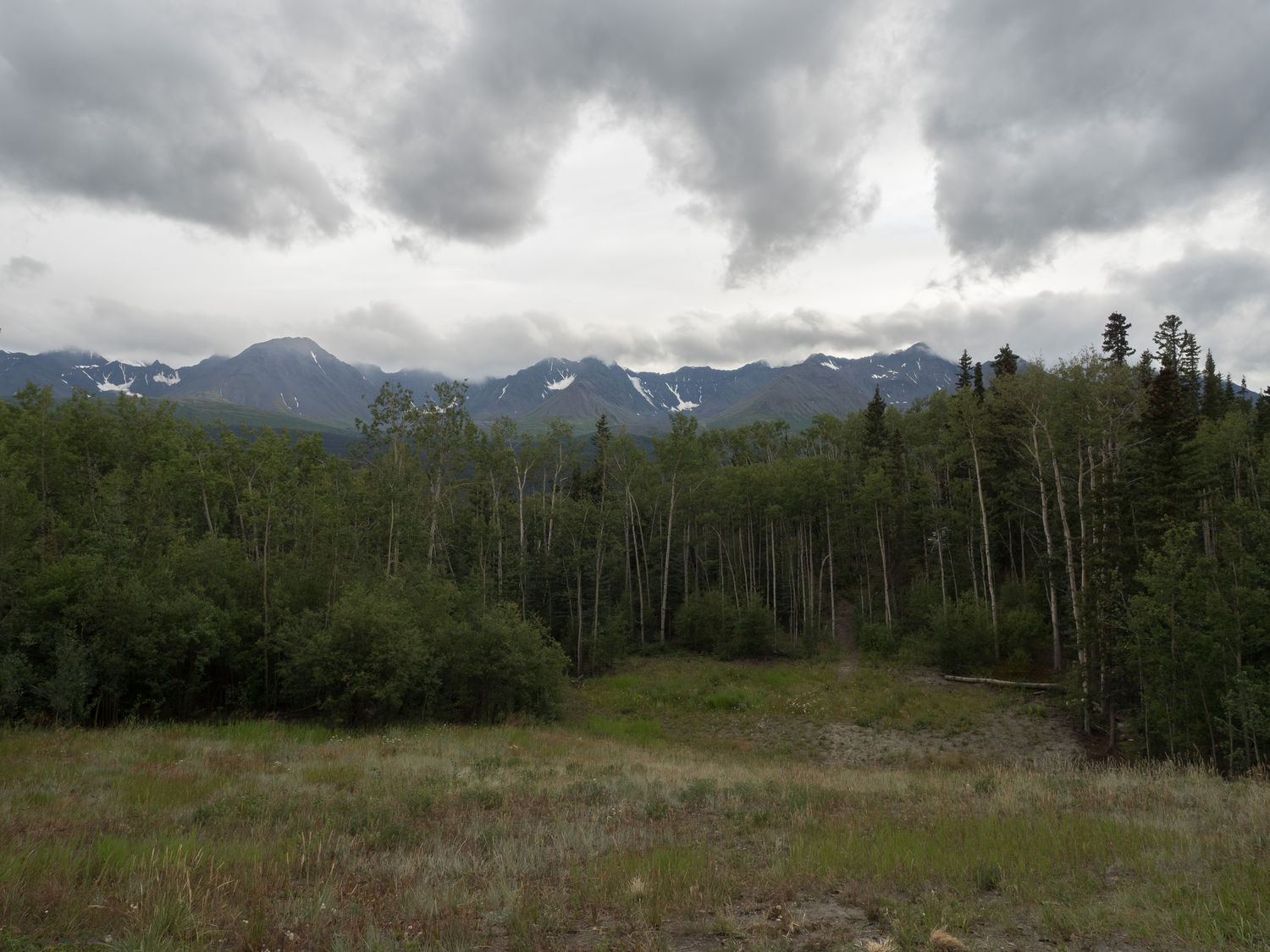 Today was a short and quiet day. We didn’t have too many plans, so we took our time this morning. We slept in a bit and went for a run. Tok has a surprisingly good pedestrian trail for such a small town. It is paved and stretches for miles along the highway between ATV trails.

When we got up, it was sunny and almost warm. We didn’t even need our running jackets. It was almost hot in our hotel room, which of course didn’t have AC.

When end we got back from running and got out of the shower, it was raining. It went from sunny and almost hot to pouring rain and cold in minutes. And I thought Texas was unpredictable. Still, it was the warmest part of the day.

We grabbed a couple of breakfast items from a local gas station and took some others from our food stores and headed off into the rain. I turned on my seat heater, which might be the best thing about our rental Suburban. Dad runs the AC even when it’s 40 degrees outside.

From Tok, the Canada border is about 100 miles, which isn’t too bad. We listened to podcasts for a while until my warm seat started to make me sleepy. Mark fed me some candy so I could stay awake. We read a little of our book and headed on to the border.

The border crossing on the U.S. side, coming into Alaska, the border station is right at the border, as you’d expect. There’s a liquor store right before you cross called, “the last stop.” I can’t imagine why you’d want to shop there. You have to declare liquor at the border. I guess I’m not the sort they were catering to anyway.

At any rate, the crossing into the Canada side is 20 km into the country. I guess they aren’t too worried about that first 20 km. Mark and I joked that nobody owned it. They let us into Canada again, and not far from the border, we stopped in Beaver Creek for a break.

We poked around for a few minutes and let the dogs get out, but the mosquitoes overwhelmed us and everyone piled back into the car pretty quick.  From a informal survey of everyone in the car, I’ve learned that we consider that to be the worst the mosquitos have been so far.

After Beaver Creek, we rolled into some of the worst roads and road construction we have seen. There wasn’t any warning, either. The only sign said, “extreme dust ahead.” Well, it didn’t lie. The road was miserably bumpy and horribly dirty. Our Suburban is totally covered in filth, even with the rain tamping the dirt down. It took forever to get through there.

The views were decent, and we saw a lot of drunken forest. Regardless, we didn’t have a lot of opportunity for pictures since there wasn’t anywhere to stop, so we just plowed ahead. We were starving, but The Milepost said there weren’t any restaurants, and it was raining, so a picnic was out.

We finally stopped a little restaurant in Destruction Bay that was attached to a motel and a gas station. The town isn’t a bay at all, although it is on a massive lake. The name came from sort sort of weather incident that caused a lot of destruction to local buildings.

The restaurant had a vegetarian sandwich, so Mark and I were good. He wanted to try poutine, but the gravy had beef broth, so we’re hoping for another opportunity later. We may not be able to find any that’s vegetarian. We’ll see. Before we left, we bought an Alaska Highway sticker.

It was 4pm, so lunch was pretty late. We drove over and took a few pictures of the lake. As we left the town, we realized that the lake was actually a national park. We got to visit an unscheduled national park.

We took some photographs of the sign. The park is called Kluane National Park, and it appears to consist mostly of the massive lake, which covers over 150 square miles. It’s a beautiful lake, and the mountains around it were shrouded in cloud. They had glaciers, I believe, but we couldn’t see them.

It was only another 100 km to Haines Junction and our hotel, and I read aloud most of the way. We’ve almost finished our current book. Tomorrow we might need a new one.

We arrived in Haines Junction around 6, and we checked into our hotel, which is cute and clean. It even has air conditioning, which had Dad all excited. The internet isn’t great, but we take what we can get here in the Yukon.

We drove around the little town, and Mark took pictures of houses he liked. I call it creepy, but he says they wouldn’t put them right there on the street if they didn’t want people to see them. Quite a few houses here are very nice, like over-sized log cabins. As long as Mark isn’t planning on moving us here, he’s more than welcome to look.

We visited a local bakery, which has great looking food. We weren’t hungry, but we are definitely heading back for breakfast. I might even buy one of their salads and stick it in the cooler for my lunch tomorrow. The food looked great.

We stopped for some ice cream and headed back to our room. The ice cream was pretty good, and we’ll get to bed reasonably early. Tomorrow we drive back to Watson Lake. We are staying in the same hotel and having the same dinner as our last visit. It might feel like déjà vu.