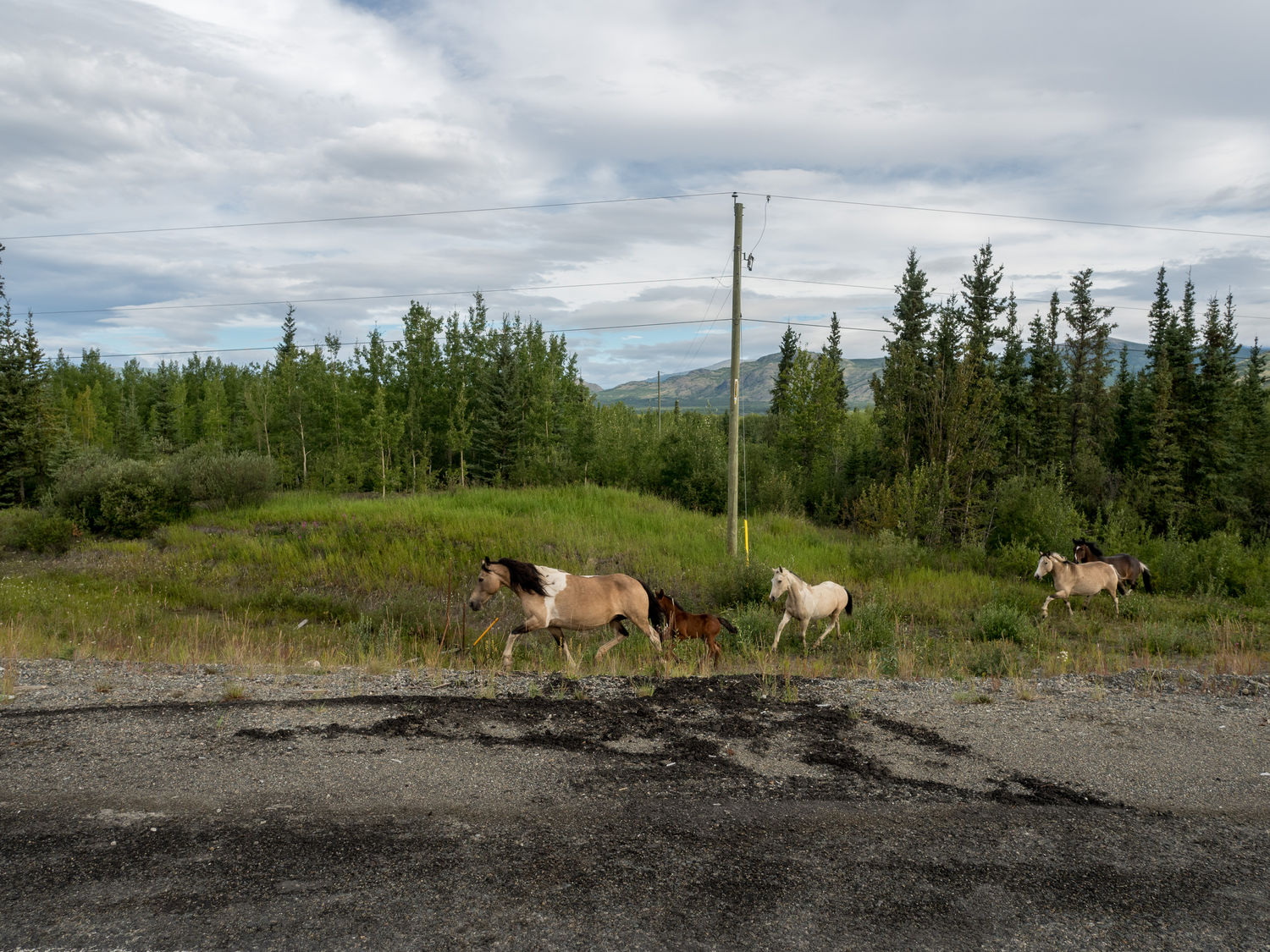 Today was a quiet day. We didn’t have far to drive, and we were driving mostly though territory that we’d already seen. To top it off, the weather remained rainy and cold for at least part of the day.

We got up this morning around 6am and Mark, Ripley, and I went out for a walk. The trails in Haines Junction weren’t great, so we couldn’t really run. Ripley and I were a little sad, but Mark seemed relieved. He looked pretty sleepy.

We stopped by the bakery in Haines Junction that we explored last night before we left town. It was just as cute as we remembered, and exactly as delicious as we expected. It was very popular. We even saw two members of the RCMP eating on the deck.

From Haines Junction, we were heading to Whitehorse. The roads weren’t great, but it was pretty quiet. We saw lots of wildlife crossing signs, so we weren’t surprised when we saw wildlife in the road. Our first animal sighting involved a very large buck deer with a huge set of velvety antlers. He was standing off to the side of the road, right at the edge of the trees. We didn’t take a photo because we passed too quickly, but it was still neat.

A few minutes later, mom mentioned seeing something in the road. We all looked up, squinting ahead to see what was up there. It turns out, it was a small group of wild horses. We’d seen a sign warning they might cross the road, but we never expected to see them.

I counted five horses total: two adult mares, a stallion, and two foals, one perhaps two months old and the other at least 6 months. Three of them were buckskin-colored pintos. They were certainly fat and sassy, which I guess isn’t too surprising, given the area. For miles surrounding the highway, thick groups of trees were separated by large meadows, thick with grass. I bet they need to be pretty hefty this time of year to survive the winter.

The mares and foals ran past us on the side of the road and passed along behind us across the highway. The stallion stopped and stared at us, since we were practically stopped on the highway. I guess he wanted to know what we were up to. We drove off while he watched. The wild horse sighting was pretty cool, I must say. I’ve only seen wild horses one other time, while driving through Colorado. They seem pretty uncommon these days.

Perhaps an hour later, we made it to Whitehorse, the capital of the Yukon. We were there recently, if you’ve been following along. From Whitehorse on today, we were seeing things we’ve seen before. No new territory until tomorrow.

Since we obviously have a problem, we went to Walmart while in Whitehorse and stopped at a bank so Mom could buy some Canadian currency. I can’t get her to call them loonies and toonies like the locals. I try to, when I need to talk about it. They probably think I’m silly, but whatever. I’m trying to blend in.

We read a lot of our book between Whitehorse and Johnson’s Crossing. We actually finished one today, and we’re now working on another. Towards the end of the books, everyone is really anxious that I keep reading. If I stop for a drink, they ask when I’m going to start again. Today they practically wore me out.

In Johnson’s Crossing, we stopped once again for lunch. We stopped there several days ago, coming the other way. When we got there, the place was filled with bicyclists. As we were ordering our food, we chatted with them to see what was going on.

It turns out that they are a group of 71 students from UT Austin that are biking 4,000 miles from Austin to Alaska for Cancer Research. We only saw perhaps 20 of them, and we saw their support van, where some of their gear was stored. I suspect they have more support vehicles than that, because surely one van wouldn’t hold enough clothing and camping gear for 71 people, regardless of how lightly they packed.

We told them that we were from UNT, and everyone seemed to recognize us or know someone that attended UNT. After being friendly, we retreated to our table inside. Last time we visited this place, we ate outside for the dogs, but today the weather was a little chilly and wet for it. We ate inside and then went out to get the dogs out as soon as we finished.

Mark bought us a giant chocolate chip cookie on the way out. It was giant and tasty. It was probably as big as four regular cookies. It was a good thing we were sharing. Ripley was especially happy to see her lunch.

She’s been looking a little light the last couple of days. She does that on vacation sometimes. She’ll lose a little weight from travel stress and the fact that her treats aren’t as readily available on the counter. We doubled up her breakfast and I’m going to try to make sure she gets extra treats the next few days. We don’t have enough kibble to feed her a heavy breakfast every day, but we’ll do what we can. She certainly loves the extra foods.

After lunch, we read for a good while, until Mark was too sleepy for us to go on. He curled up for a nap in my lap and was out for probably 45 minutes. It gave me a little while to rest my voice. With the nap finished, we had some milk duds and then I was back to reading.

We stopped for a rest stop outside Nugget City, since it had been a while since our last break. Someone had built a wooden shelter on the edge of the rest stop, and we speculated where it might have come from and who might’ve used it. It was neat, regardless, and long abandoned.

It was actually only about 20 minutes from there to our final destination in Watson Lake. I didn’t miss Watson Lake, but here we are. We’ll see how the internet is here. This place has the worst internet I’ve experienced on the whole trip, I think. And its running path isn’t great.

When we got here, we checked into our hotel and Mark, Mom, and I walked around the town a little. We visited a grocery store and a gas station and looked around. We’ve already seen all there is to see here.

Mark spotted something he found exciting at the gas station, though. It was a giant travel truck/van that was traveling from Germany to Alaska. It was an Ormocar, from what I can tell. I don’t know a lot about it, but Mark was plenty excited for the both of us. It looked like a top-heavy tank. Apparently it was the Oklahoma edition. They had a Rhodesian Ridgeback watching us take pictures from the front seat. A sign on the truck said she was friendly. I was more excited about the lion-killing dog than the truck, but that’s just me.

After that, we came back to the room to try to start some laundry for Mom. The laundry machines were busy, so we headed back over to Kate’s Kitchen for dinner. We’ll wrap up the laundry this evening.

It’s an early night, and in the morning we’re heading over to the trail around the local lake for some exercise. We drive to Stewart, British Columbia tomorrow. It will be new territory for our trip again, which will be nice. Hopefully it will inspire more photographs.