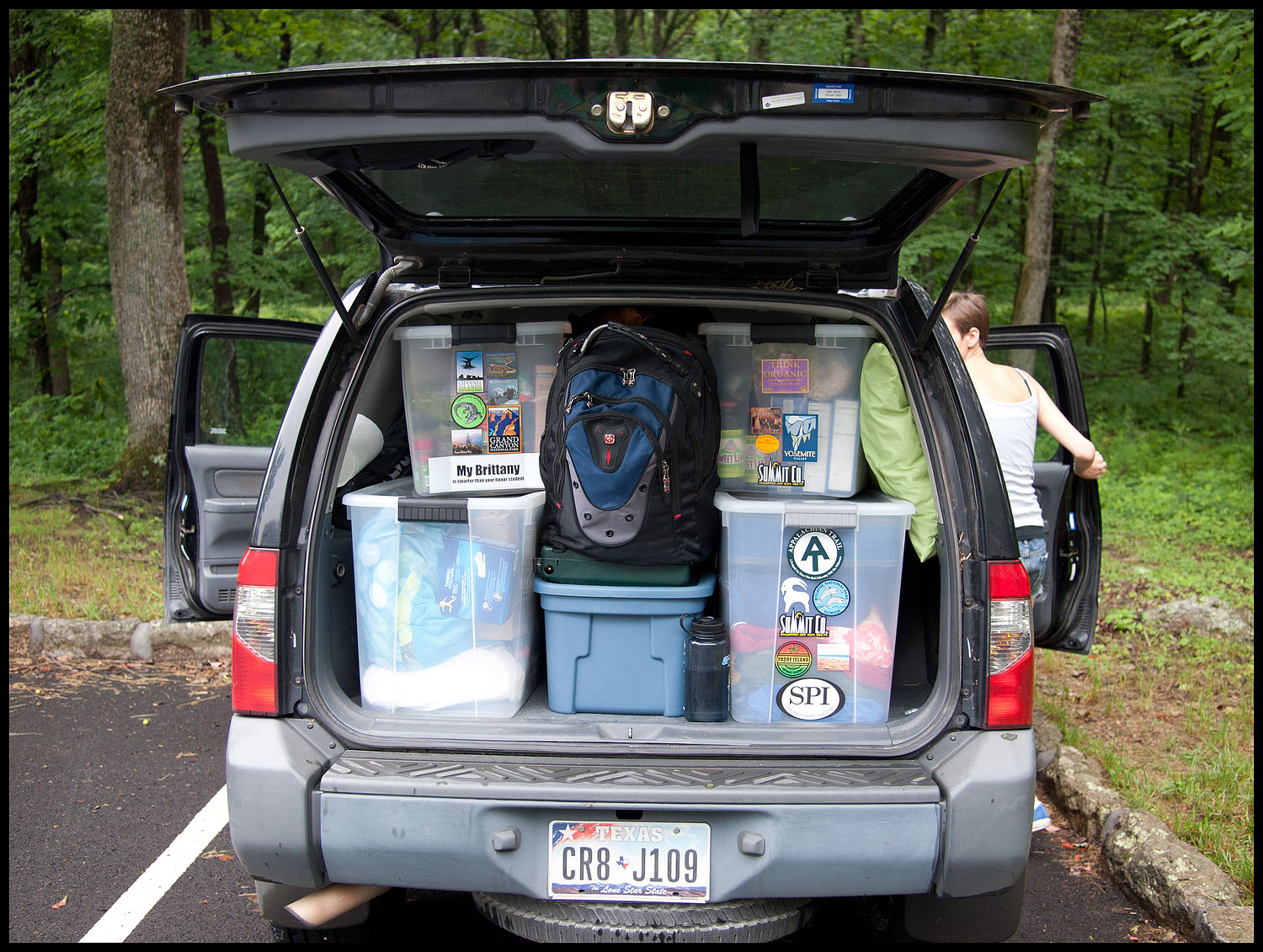 One of the first decisions Mark and I made when we first started taking long trips was that bags just weren’t cutting it for us when we packed. We had too many things in too many separate bags. Every time we tried to go into a hotel, we had to haul all of the bags inside to find everything we needed. No amount of strategic packing solved the problem, either.

Invariably, once a bag is big enough to hold everything you need for a two week trip, it’s too big to easily carry. This is an especially big deal when you consider that I am not nearly as strong as Mark, so I could only carry half of what he could and he would sometimes need to make multiple trips to get everything inside.

The first crack in the wall of bag-usage was actually an issue with chips. That’s right, chips. When we tried to pack snacks, they would inevitably end up crushed by other things in the car, no matter how careful we were. It was frustrating. So, we considered some options, and we ended up deciding that those clear, plastic storage containers that you see at Target and Walmart would make a great place to protect our snacks.

And then we got Ripley. And Ripley takes up a great deal of room in the backseat of our Nissan Xterra. We lost basically the entire backseat (save for our cooler space) so she would be comfortable. And to be sure, she takes up all of her allotted space.

So, now we needed all of our things, including our snack tubs, to fit in the back of the car. So we bought larger tubs. And we bought Eagle Creek packing cubes to pack our things in inside the tubs. With all of the tubs, we needed an exact size, and we needed a system. So, on a typical trip, we pack two large size tubs, three medium sized tubs, Ripley’s crate, and her backpack.

To begin, we fold up Ripley’s cage and lean it up against the backside of Ripley’s seat first. Then, we put the two large tubs (which we fill with clothes and shoes and hats) on the far sides on the left and right. After that, we put two medium-sized tubs (filled with snacks and drinks waiting to go in the cooler) on top of the large ones. These only just fit, proving that our tub solution was masterful. Finally, we put a last medium tub (filled with kitchen-like supplies) in the middle. We pop Ripley’s backpack on top of that,  which leaves a convenient gap in the back windshield for the drive to see through. Put the cooler and some bottled water up with Ripley, and we are good to go.

On some trips, we have other things packed along with these. Tent. Camp stove. Hiking stuff. Mostly though, this is our typical gear. It separates really well into the tubs, and it gives us a lot of freedom to pack breakable things, separate things into categories to take in or not at hotels, and make people think that our things aren’t really worth stealing.

So you know what is fun about transparent plastic tubs? It’s like a blank canvas. And do you know what lots of tourist attractions (like National Parks) sell? Stickers. I may be a nerd, but this absolutely makes my day. I love putting stickers from our trips on the tubs. I know lots of people put them on their car or in a scrapbook or somewhere else like that. But there’s something satisfying about putting the stickers on the tubs that we travel with. It’s a really meaningful souvenir.

Now, unfortunately the tubs aren’t perfect. They are cumbersome, so without some easy means of transport, they can be a real pain to get to the hotel room. At motor lodge-style hotels, if we have a room on the second floor, we have to carry the tubs up the stairs. It isn’t difficult, exactly, but it isn’t fun, and it takes several trips.

In regular hotels, if you can’t find a luggage cart, the same problem presents itself, but inside. You have to carry the tubs either up the stairs, or take the elevator with them in your arms over and over. This can be very time-consuming, and the lost time can mean a lot when you are hungry or it is late.

If you are the type to care what others think, it can also we awkward to cart them through fancy hotels. They don’t exactly scream “class.” In fact, it’s says something more like, “The Clampetts go on a trip.” It doesn’t usually bother us, but it is definitely something to consider.

The final problem is that it really limits what you can do with your space. If for some reason (say, a holiday) you need to pack a bunch of other stuff (like Christmas presents), you don’t really have room. It can require some creative thinking to get everything in the car in those unique circumstances.

Overall, I’d have to say that I really like the tubs. They work well for now, and they fit very well in our current vehicle. The only downside is, since we are perfectly packed, I don’t have room to get Ripley a sister to travel with us as well. Ah, puppy dreams.