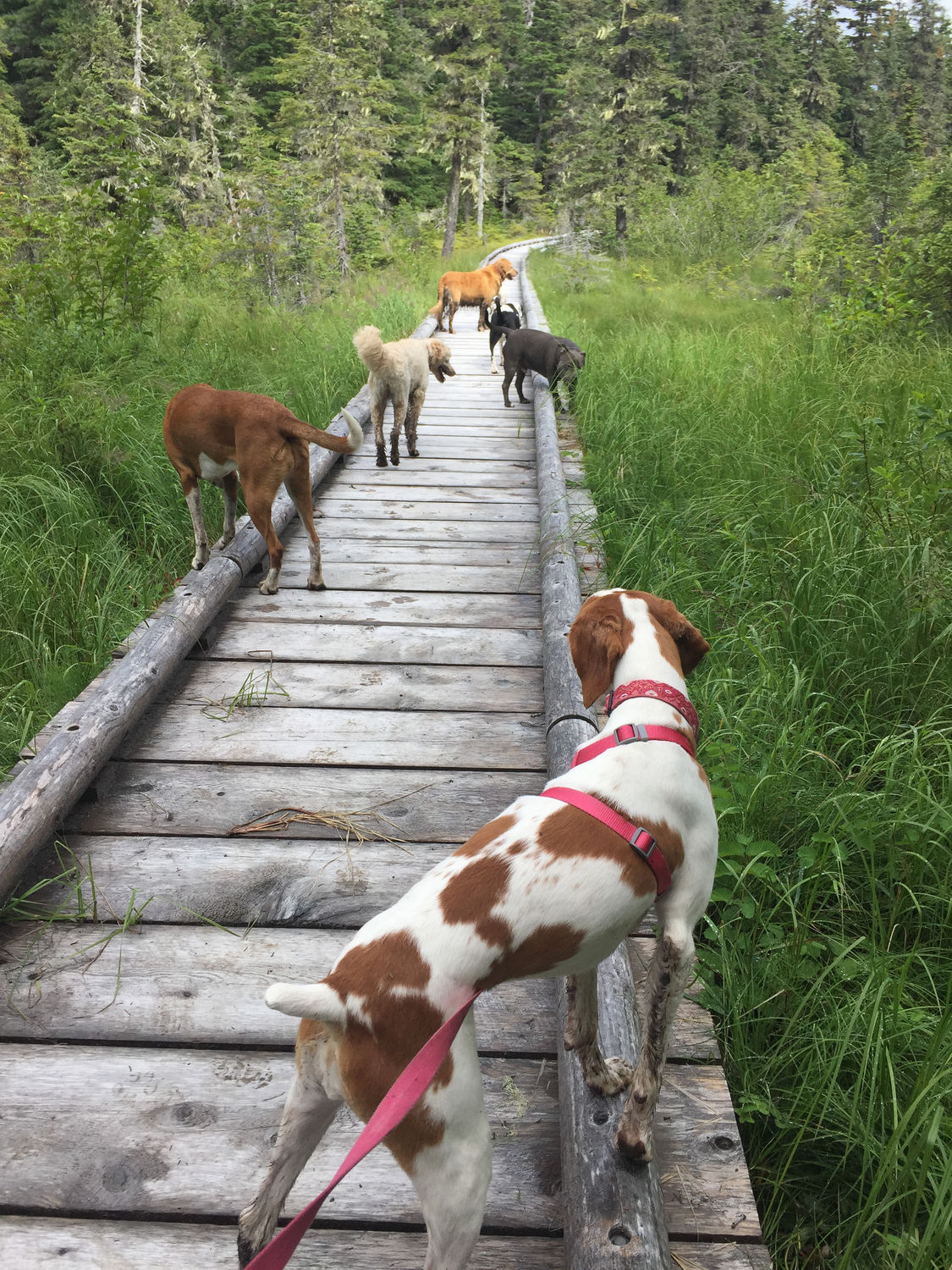 Ripley had a fantastic time while we were in Alaska, and I think Sabre did, too, although she’s such a grouch that she’s a little harder to read. Since we had so much trouble finding things that sounded dog-friendly on the internet before our trip, this week and next week I’m going to post about the things that we found on our trip that worked out well for our four-legged friends, first in Alaska and then in Canada on the way.

Basically, while planning the trip to Alaska, we need to know what hotels would accept pets, and where we would keep the girls when we needed to spend almost a full day away from them. These proved to be the most challenging aspects, although in both cases, the issues were in Denali and in Seward. We also tried to make a list of dog parks and running parks beforehand, but these were less important.

So, let’s start with hotels. Mark had to call most of these places, because they simply didn’t bother to list whether they were pet-friendly on their websites. In fact, many of the websites for the hotels in the more remote places in Alaska are sub-par, to say the least. Don’t go into planning a vacation in Alaska expecting it to be like planning a vacation in Orlando. They don’t have the infrastructure (half the time the internet didn’t work there anyway) and they just don’t need to have a strong web presence. In many cases, they are the only hotels in their area, and you either stay there or you stay in your car. You choose, obviously.

We stayed in five hotels in Alaska for a total of seven nights. Fairbanks has plenty hotels. We went with the Super 8 because it was pet-friendly and cheaper than many of its competitors. It was reasonably nice, as well. In Alaska, most hotels and businesses are trying to make all of their money during a 3-month summer, so many things seem way more expensive than they ought to be. This is especially true of even budget hotels. Once winter rolls around, they will not be making any money at all, even in the cities. Some places shut down October 1st. Many people who work there head back to the Lower 48 for winter, too. Everything will probably cost more than you’d want it to, but you can still have a solid budget and expect to find decent places to stay.

Finding a place to stay outside Denali was a bit harder. We originally looked in the little town right outside the park, but it was way out of our price range. I do believe some of the hotels there take pets, but the prices are exorbitant, and the dog kennel at the park was refusing to take new animals this year. I can’t say if that will be the case next year, but that meant that we needed to push out a little to find a place to stay. Fairbanks is an option, although it is a couple hours away. We ended up choosing Cantwell, and the hotel we chose there is the only one I would not go back to. Take from that what you will. The dog sitter at the RV park in Cantwell (which I will talk about a little later) was an angel, however, and I would stay in Cantwell itself again just for her services. She was fantastic.

The hotel in Seward was one of my favorites: the Taroka Motel. I can’t recommend it highly enough. The rooms are solid and clean, and many come with a kitchenette. It used to be officers’ quarters for some branch of the military, according to the innkeeper. It was great, and right next door to a laundromat. I would stay there again and again. The owner was wonderful and the hotel was perfect, and for a reasonable price, too. There are bigger and fancier hotels in Seward, but you don’t need them.

Valdez was passable, although the first room they took us to wasn’t cleaned and they warned us that the TV might not work, which isn’t ideal. We did end up in a different room, though, and everything worked out fine. Tok is a small town, and the motel was pretty nice. It was large and clean, and I would definitely stay there again, although the town itself is a little light on food options.

Unfortunately for Ripley, we didn’t visit any of the dog parks in Alaska. I did make a list, and I will go ahead and tell you about the three I found, but bear in mind that I didn’t visit them. It rained, of course, which ruined Ripley’s day on more than one occasion, although I am not sure Sabre minded. Exercise for someone with legs as short as Sabre’s (and her back problems, of course) basically includes a little jaunt around the hotel. Ripley requires more vigorous exercise, so we did run in the rain several times.

The park I am saddest that we missed was in Fairbanks. It operates year-round, from what I understand. I was really disappointed that it rained that day. Seward also has a dog park, which we missed because on day one it rained, and on day two Ripley had already spent the day running around with a pack of dogs at the pet-sitter’s place. It is in Central Park, from what I can tell. I never saw it. Finally, there’s a dog park in Valdez, which we missed because we got into town so late. It is called Shana Anderson Dog Park.

Tok is too small for a dog park and Denali doesn’t really cater to dogs. I know Anchorage has at least one dog park, which I looked up but didn’t bother to visit based on time constraints. I believe Ketchikan and Juneau do as well. It is a little less clear for Wasilla.

We ran in Fairbanks, Seward, and Tok. Lots of places in Alaska have snowmobile trails that aren’t used during the summer (obviously), and those make excellent little running paths. Tok, in particular, had a very nice trail for how small the town was. In Seward, we ran on Iditarod National Historic Trail, which ended up being, at least in part, through the middle of town. That wasn’t ideal. Fairbanks had much more established running trails, being a large city, and they were happy to have dogs on leashes on any of them.

We didn’t have time to run in Valdez, and there wasn’t really anywhere to go, anyway. Cantwell had many hiking and biking trails, but after the man that owned our hotel offered us bear spray and told us that bears would try to chase dogs away, we decided running out in the open was better. We ended up running around a trail near an airstrip at one of the local RV parks. I can’t say I recommend it, but it wasn’t too bad for what it was. It seems like, for the most part, dogs are allowed anywhere but in buildings in Alaska, as long as they are on a leash. In many cases, the leash isn’t even required. Our kids are always on leashes because they are dodos, but I can see the appeal of letting them range free.

That being said, the smaller towns aren’t really expecting the people that live there or even the tourists to want running trails, so they often just don’t have them. Hiking trails are more common, but if you aren’t a trail runner (which we aren’t), it can be a little harder to choose a spot.

For me, the most worrisome part of everything was finding somewhere for the kids to stay while we took our boat and bus tours. The boat tour was more than 6 hours, and the bus tour was more than 8. In both cases, that’s a long time to leave a dog anywhere, let alone a hotel. Sabre is quite fond of barking, too, and since we’d be out of contact, I was worried about her causing a disruption if we left her alone in the hotel. She can be pretty annoying when she wants to.

In Cantwell, Ripley and Sabre stayed with a sitter while the rest of us took a bus tour through Denali National Park. Cantwell is only about 30-40 minutes outside Denali, so dropping the dogs with the sitter wasn’t difficult at all. Our pet sitter came from Cantwell RV Park, and she was a delight. She took great care of Ripley and Sabre. They both went for a walk and Ripley even got to go for a run with the sitter and her dog, Molly. I was a little nervous, but the sitter was very kind and reassuring. I felt safe leaving the dogs with her, and she did everything we could’ve asked of her and more.

In Seward, the girls stayed at the Seward Pet Lodge while the humans took a boat tour around Kenai Fjords National Park. Sabre stayed in her crate, per our request. She isn’t the friendliest canine, and the Seward Pet Lodge was very populated during the day. Ripley got to run around on the trails with the other big dogs on the visit. The sitter even sent us a picture (the featured image at the top) of Ripley’s adventure that day. The owner opened a bit early so we didn’t miss our boat, too. Overall, that was a fantastic experience as well.

It was nice to find such kind and experienced sitters for our big national park days in Alaska. I would highly recommend both of them to anyone else in our situation. The dogs had fun, the prices were totally reasonable, and we had peace of mind knowing that our fluffy friends were safe and happy and well-fed while we were away. Be aware, however, that most kennels and sitters require vaccinations. If you are curious, you can check your sitter’s website, and you can read about what we do for Ripley here.

Overall, the dogs did well in Alaska, and I found most of Alaska to be very welcoming to dogs. We even saw a cat or two at the hotels. We found great hotels, sitters, and running trails, and we read about great dog parks. Our dogs handled the drive with ease, and we found it easy to keep them happy and entertained. If you are curious about anything, or have any questions, please ask in the comments. I’ll be happy to help you out with anything I can.

In the end, the dog’s (and Ripley in particular) had the hardest time just getting back in the car on those last three days of our trip, when we were hell-bent on getting home. It got to where I had to pick Ripley up and toss her in the car. You’ll be happy to know that she has since recovered, and she is once again super-stoked to run to the car for a drive.