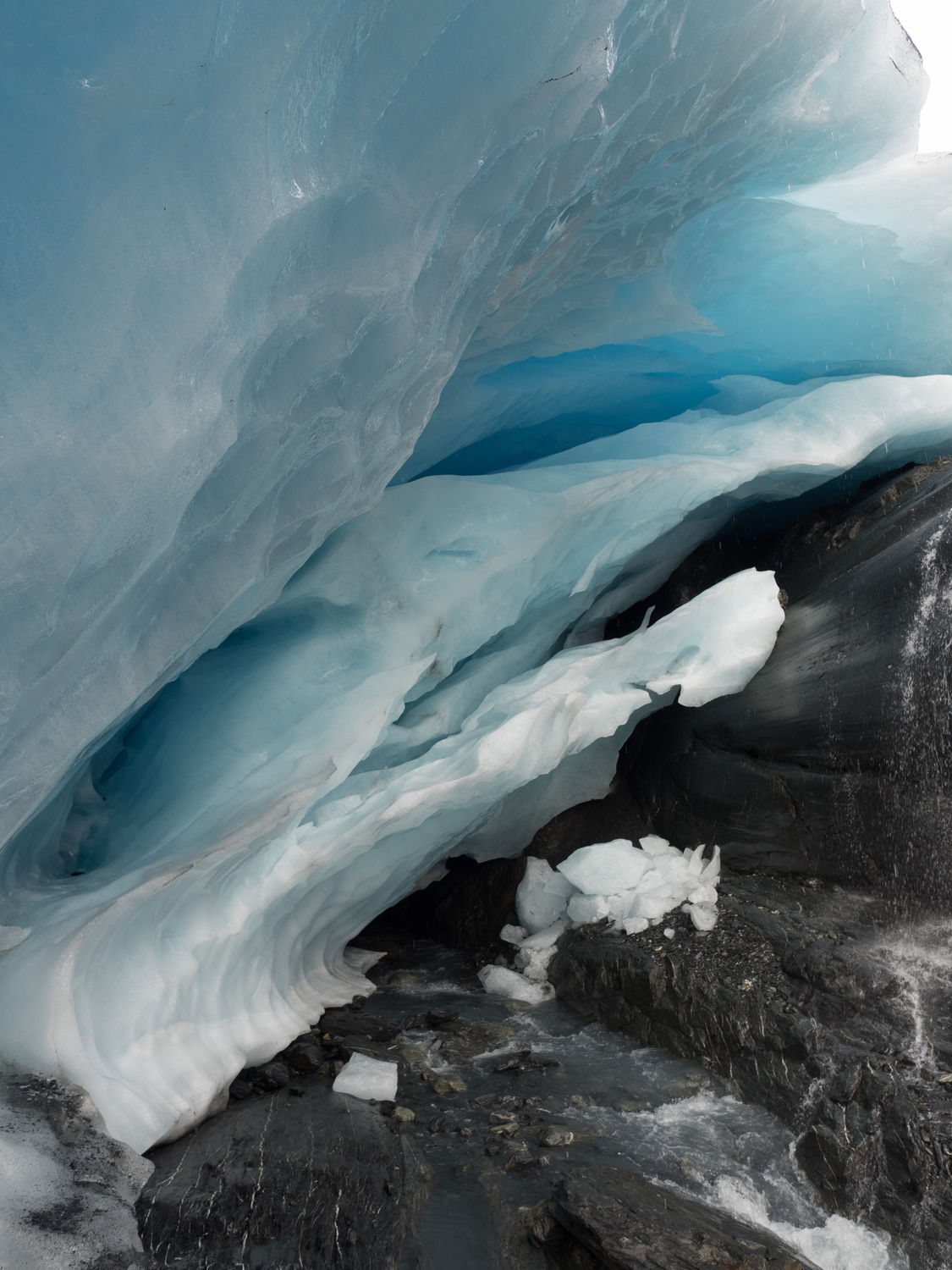 Saturday started off foggy and cloudy. We heard on the news last night that the weather was about to change, and since yesterday was so warm and pleasant, we were worried that today would be dreary and cold.

We got up at 5am today and hurried out of the hotel. By 6:15 or so, we were in our hotel’s restaurant, having breakfast. It was a decent breakfast, much better than yesterday, but it was a little overpriced. The food was good, and the biscuits were fantastic. Not everyone can make a wonderfully fluffy buttermilk biscuit the right way, but this place nailed it.

Since we had a lot of photographs to take, we headed out of Valdez with cameras in hand. As I mentioned earlier, the sky was overcast and the fog was thick with on the mountaintops around us. We got some lovely pictures of the waterfalls on the way out of town, but we were worried that was all we would see.

As were driving down the road, we happened to see a cave. It was situated in such a way that we couldn’t see it when we were driving in on the same road the day before. We pulled over and went to check it out.

It turned out that it wasn’t really a cave. It was actually a hand-carved tunnel. Back in the day, several railroad companies were competing to build valuable rail lines from areas that were not yet connected by railroads. This tunnel in particular was chipped out of the tunnel by hand in 1910. Apparently the tunnel was later abandoned after a feud broke out and a gunfight ensued. I guess you could say it was people trying to conquer the wild Alaskan frontier. It’s pretty funny to put it that way, though.

We stopped and photographed a few portions of the river and some mountain views, but the fog was pretty thick. I knew the glacier was coming up, and I was worried we wouldn’t even be able to see where it was for the weather.

When we finally came upon it, we could see the bottom, and Mark kept promising that he thought it would clear up in five minutes or so. The glacier is called Worthington Glacier, and we stopped at its state recreation area to take photographs.

We walked out to the viewing platform and took a few pictures, waiting for the skies to clear a little more. While we were piddling, Mark found a trail that lead off toward the glacier, and he asked if Ripley and I wanted to walk out with him to see if we could get pictures a little closer.

Well, we certainly got closer. The trail led up a hill past a glacial lake and through little streams of glacial runoff right up to the glacier itself. The sign warned that the ground was unstable and the trail wasn’t maintained, but once we got going, we couldn’t bring ourselves to stop.

As we climbed the hil, our view got better and better. We could see the little waterfalls streaming off of the rock faces, and we could see the glacier’s face. After a moment of wonder where we stood and took pictures and looked around in awe, we realized that we saw a small blue ice cave beneath one side of the glacier where most of the water ran out. It was gorgeous, so we had to get closer.

We walked up a little further before we realized that not only could we take fantastic pictures of the little cave, but we could also touch the glacier on the wall past the cave, where the ice was more stable. Ripley, Mark, and I played around the glacier for perhaps 15 minutes before we started back.

On our way down, a woman that was coming up asked us to come back with her and take her photograph at the glacier. Mark went back up with her, and Ripley and I started down the trail. It was a little steep for us alone, so we waited for Mark to finish up before we went all the way back to the viewing platform. Ripley was ready, but I’m obviously more cautious that she is.

When we returned, Dad was talking with the older gentleman whose wife had climbed up the glacier by herself behind us. He was a music teacher from the states that was visiting Alaska with an RV caravan. Dad makes friends everywhere.

After the glacier, we drove up the Richardson Highway until we reached the road that led off to Chitina. Past Chitina, the McCarthy Road travels 60 miles of unpaved former railroad back into Wrangell-St. Elias National Park.

We never planned on going all of the way back, just 17 miles. The park technically begins at mile 15, so we didn’t make it very far in. It is the largest national park in the country at 13.2 million acres.

By this time, the weather was perfect. It ranged between about 70 and 82 degrees, depending on our elevation. The clouds had burned off, and the sky was a gorgeous blue.

At any rate, at mile seventeen, a single lane wooden railroad bridge rises 238 feet above the river below. It is called the Kuskulana River Bridge, and of course, if we were only doing one thing in Wrangell-St. Elias, it had to be the scary bridge. Once again, Dad and I were pretty uncomfortable with the height, but Mark and Mom loved it.

Fun fact, but underneath the bridge is an old catwalk that is now blocked off by a huge metal structure. Mark read on the internet that you can still access it with a little gymnastics, so he decided to test what he’d read.

Mom gave him a leg up onto the pylon and he swung beneath the huge metal gate and clambered up the railing of the catwalk. No one else particularly cared to partake, so we all watched Mark from the ground. Ripley would’ve gone, I bet, but she wasn’t offered the option. Her mother told her no.

I fretted a little while he was up there, but the truth was that the only scary part was the part where he got on and off of the catwalk. I figure if the bridge was holding cars at the top, the metal catwalk at the bottom would certainly hold Mark. He survived, and I’m sure he took some lovely pictures. I’m scared even the pictues will give me vertigo.

After the bridge, it was lunchtime. We headed back out of the park and to Chitina, where we’d seen a state recreational area outside the town. We stopped at Liberty Falls State Recreation Area for lunch. We had a picnic at a little table back in the trees sort of between the river and the falls, although we couldn’t see either for the trees.

When we finished eating, we walked over and took some pictures of the waterfall and looked around. Behind one of the campsites, you could get down the the water beneath the waterfall, so we headed over to see what the water was like.

I put my hands in, Dad tested it with his feet, and Ripley tried to wade all the way in. The water was clear and tumbled over gray river rocks that Mark stood on to take photos. The water wasn’t numbingly cold, but it was biting. It was the sort of water that you could probably get used to on your feet and legs if you gave it a few minutes. None of us really tried that.

Ripley seemed to love the taste or maybe the cold of the water, because she kept dipping her tongue in for a little taste. We took some pictures of our little model puppy hanging out on a giant rock and wading in the cold water. She was having a blast, and when we got back in the car, she was exhausted. Between the glacier and the waterfall, she’d had a busy morning.

With lunch finished, we really didn’t have anything left to do with our day but head to our final destination. We drove on to Tok through the mountains while I read aloud from our new book: Digital Fortress by Dan Brown.

We made it to Tok (it rhymes with coke) around 5pm, which was an earlier day than we expected. We checked into our hotel and the drove over to Fast Eddy’s, where we had lunch the other day. Everyone but Mom had salad bar. Fast Eddy’s has some fried clams that she really likes.

After dinner, Mark went to the laundromat to wash Ripley’s blankets while I washed Ripley herself. She had a bit of a puppy spa day. I cleaned her ears, brushed her teeth, and clipped her nails after her bath. As a reward, I gave her a Greenie tooth bone, and she went right to sleep.

It’s pouring rain here now, but it should clear off before we go to bed. In the morning, Mark and I are headed out to run along Tok’s fantastic pedestrian trail. Tomorrow is an easy day, so we will probably get up a little later.