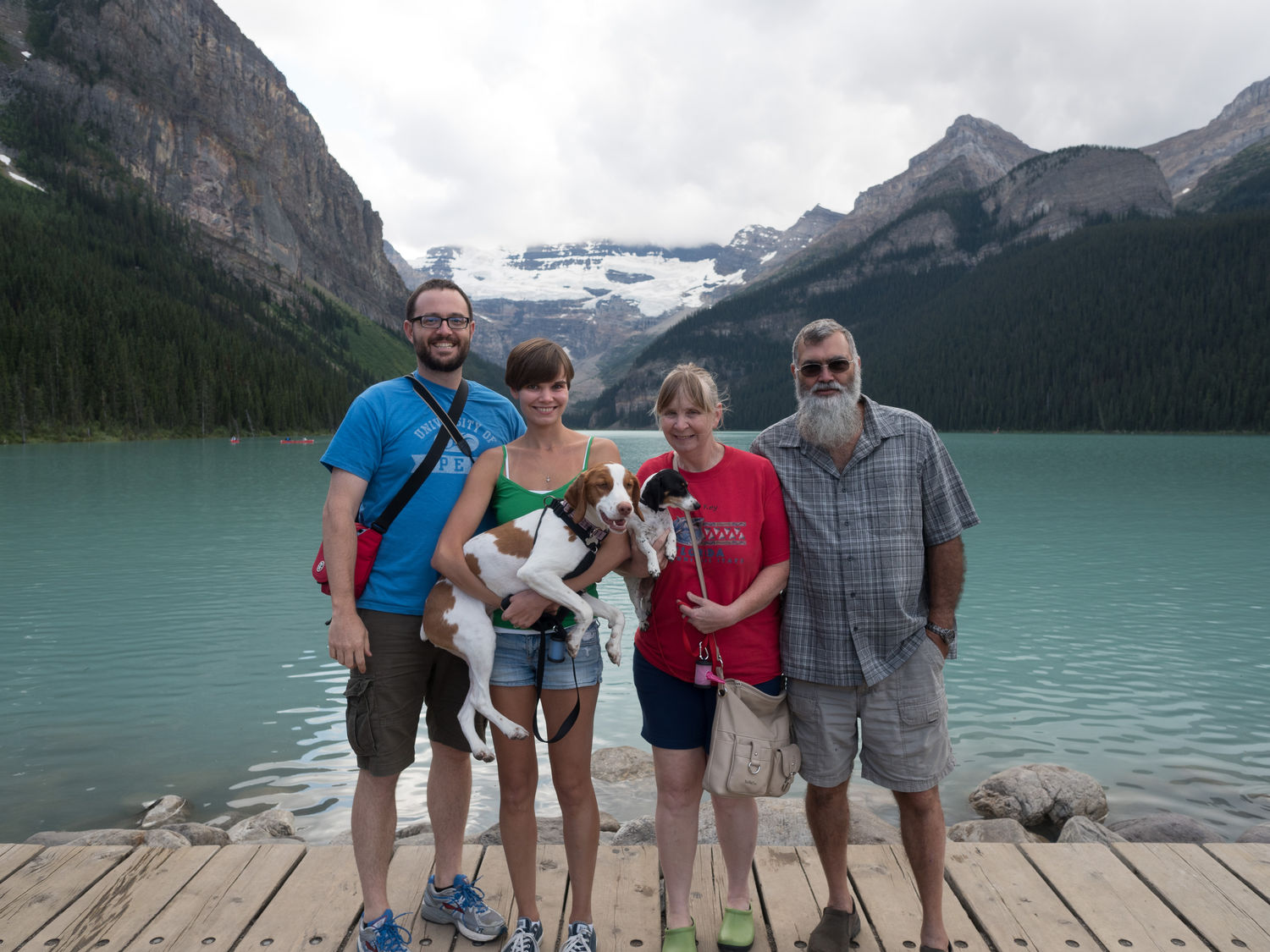 It’s actually been a little cold today. When I carried our bags out of the hotel to the Suburban in Butte, I was shivering. It still ended up being in the 70s later in the day. We left pretty early, around 6:45am or so this morning. We’ve done better, but it definitely could’ve been worse.

Driving up through Montana today, we saw miles and miles of rolling green hills. They ended as we drove past Glacier National Park. Glacier is a magnificent park, but we didn’t have time to visit today if we wanted to make it to Banff in in a reasonable amount of time.

Just outside of Glacier’s entrance, we stopped in the town of St. Mary for sandwiches. We were barely finished eating them in the car before we ran into the border crossing to Canada. They let us in, so clearly we aren’t the hoodlums some of the readers must think we are.

Once we were in Canada, the land changed back to rolling hills, although most of the area was farmland in this case. We passed field after field of canola, or rapeseed, which is a lovely butter yellow crop used to make oil. The canola fields were massive, and interspersed with fields of other crops of green and brownish colors. It seems silly to think so, but it was one of the prettiest views of the day. That was, of course, until we got to Banff.

Just a side note, because I’m not sure this is important to anyone, but I saw an awesome town name today. Alberta has a town named Head-Smashed-In Buffalo Jump. I wish we’d been able to visit. I almost physically need a photograph of Mark or me with the city limit sign. But I digress.

It was raining when we made it to Calgary. It was never heavy, but it had obviously poured before we arrived. I know I’ve talked about this before, but I mentioned to my mom how funny I thought it was that she’d told Dad it wouldn’t rain in July, and it has rained on a section of our trip every day so far. She laughed, so I guess I’m not in trouble.

At Calgary, we made a sharp left and headed west to Banff National Park. It’s actually quite a bit further to Banff from Calgary then we’d anticipated. At first, we weren’t even sure if we were seeing the right mountains in the distance.

And then we started seeing the right ones. And it was breathtaking.

I’m really not sure I can do Banff National Park justice. I don’t think my words or my photographs can even begin to describe how amazing Banff really is. I will do my best for you, dear readers. But, please believe me when I tell you that anything I say will fall short of the reality.

Banff has towering mountains, glistening glacial lakes, trees for miles, and snowy white glaciers, just to name a few of its wonders.

The mountains are mostly bare of snow, with sharp, almost knifelike peaks in places. The smaller mountains are covered in trees. The river running through the park is as blue as the sky.

I would go back in a heartbeat. I would spend a week. Spend a month. I can only imagine what it looks like in winter. I suppose I could visit a ski resort in Banff some winter, but I’m not much of a skier. It requires too much coordination for me.

Something I hadn’t really realized before today is that Banff is also a town within the park. It is 100% a kitschy tourist trap, but it’s really cute if that’s your sort of thing. We weren’t really into it, and the town was packed, so all we did was visit the park information center before heading deeper into the park.

A large highway actually runs through the middle of Banff, and to see the scenery, you take exits into little towns and pull-outs to take your pictures and get to your activities.

The most famous photographs of the park are take at Lake Louise, with a view of Victoria Glacier in the distance. When I first saw the lake through the treed path from the parking lot, I gasped. The rain clouds hung low and heavy over the peak of the mountain beside the glacier, but the sun was shining through the clouds in places. The blue lake was dotted with little red canoes filled with people. It was truly gorgeous, and I think the clouds only added to the view.

Incidentally, Ripley met another Brittany at Lake Louise.  She was a little smaller and a lot fluffier than my fur baby, but they were equally excited to see one another. It’s cute to watch dogs with similarly spunky personalities interact.

I’m going to wrap this up, because I think I could go on about Banff National Park forever.

We took a smaller highway out of the park after eating a picnic-type dinner in the car. It was after 10pm when we made it to Airdrie. We were in the car for far too long today, but it was worth it. Maybe tomorrow will be a little quieter.