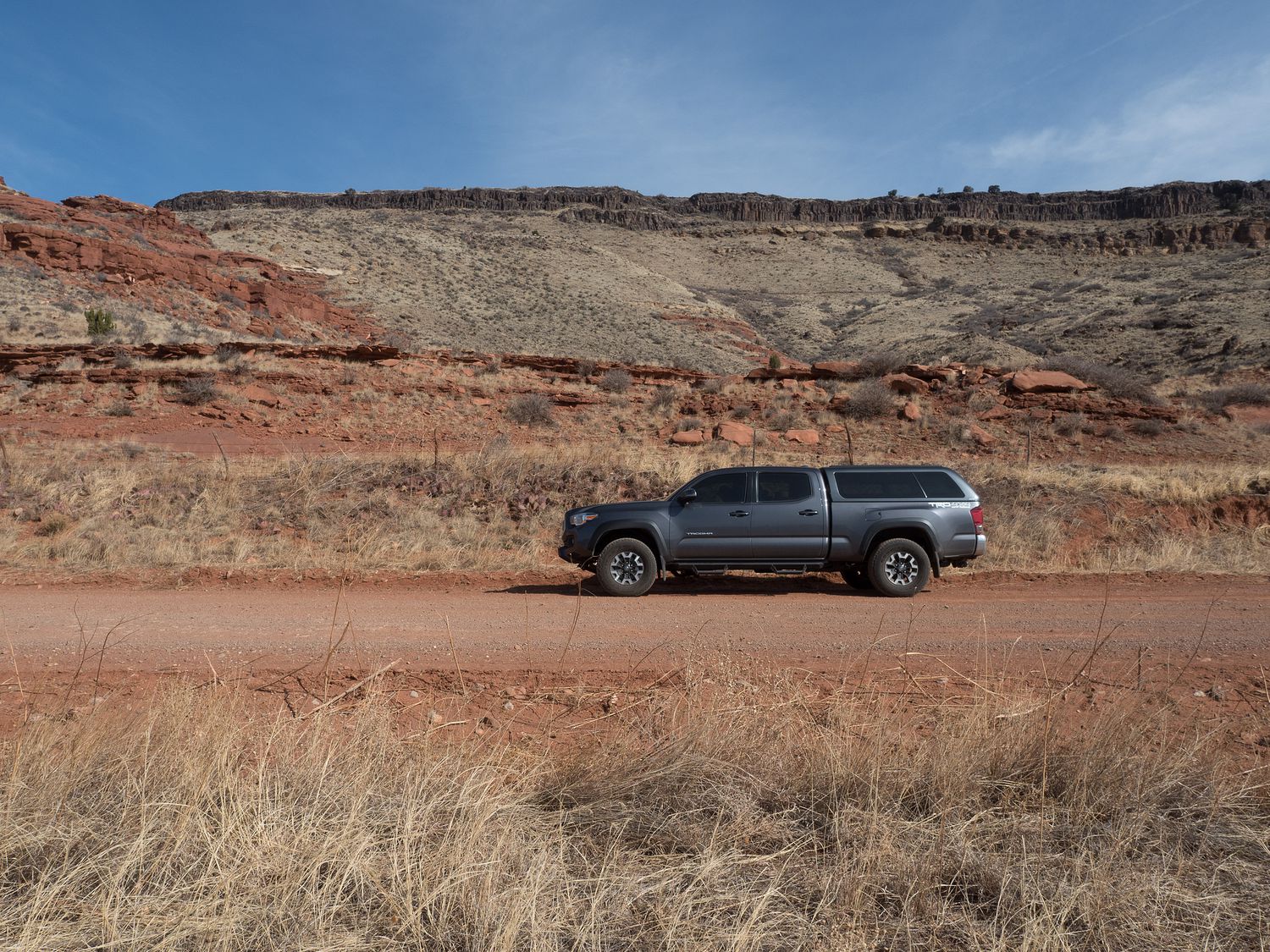 Oh, Xterra. How we’ve loved you, but it’s time to pass the torch. Our 2004 Nissan Xterra has been through 275,000 miles with us, first with just Mark, and then with Ripley and me as well. We dreamed of driving it to 400,000 miles, we dreamed of keeping it until the wheels fell off. You think I’m joking, but we really did love the thing.

Unfortunately, love alone cannot keep a vehicle from getting old. You see, in the past 6 months or so, Xterra had started burning a little more oil than we were comfortable with, and while we knew it would last for many more years puttering around Denton, it was no longer reliable for long trips across the country, which we tend to make several times a year. It was with heavy hearts that finally came to the realization that we had to let it go. So, Mark embarked upon an Internet journey of discovery (enjoying the travel theme?) to find a reasonable replacement, since Nissan stopped making Xterras in 2015.

If I could go back to 2015, when the last of the Xterras were rolling off of the production line, I’d snap one up before they were gone. Unfortunately, hindsight is 20/20, and no one’s invented a time machine yet, so we were out of luck. Our backup option had always been the Toyota FJ Cruiser, but they stopped making that one in 2014. Mark has always liked the idea of a Subaru Outback, which I find hideously unattractive, but we decided to really look at everything.

Mark really did spend a great deal of time on the Internet, looking. I’d promised him a 4-wheel drive this time, so he was determined to get the vehicle choice just right. Our dream at this point was to get a Chevy Tahoe, but they’re just so expensive. We could get a similar vehicle for $15,000 less, which I must say, we did.

So how did we end up with a Toyota Tacoma? Well, Chevy Silverados are cheaper than the Tahoes, and with a topper, the Silverado would have been just as good as the Tahoe. That’s where it all began. When we started looking at Silverados, though, we realized that it was really hard to get the interior configuration we wanted without getting a crew cab, which was just way too big for what we wanted. Silverados in general have gotten much bigger since they changed the body style in 2014. I drove a GMC Sierra (which is the GMC equivalent to the Silverado) when I was a kid, and I’ve loved them ever since. Unfortunately, they’re so much bulkier now. It’s a little silly.

With me teetering on the edge of not wanting the Silverado at all, Mark started pushing for the Tacoma. He had been watching videos from a YouTube channel called Expedition Overland, where the channel’s proprietors made beautiful videos of Toyota Land Cruisers, 4-Runners, and Tacomas driving across the country in modded-out vehicles that they took off-road. It’s not as macho as it sounds from my description. In fact, for the most part, the videos are nothing like the typical 4-wheeling videos you may have seen. That’s because overlanding has it’s own specific definition and customs that really differ from off-roading for sport. It’s much more about travel.

From Wikipedia, the definition says, “Overlanding is self-reliant overland travel to remote destinations where the journey is the principal goal. Typically, but not exclusively, it is accomplished with mechanized off-road capable transport (from bicycles to trucks) where the principal form of lodging is camping, often lasting for extended lengths of time (months to years) and spanning international boundaries.” We now watch many overlanding videos and follow a large number of YouTubers that do overlanding, with another more popular one being Ronny Dahl in Australia.

Oddly enough, so many of these people drive Toyotas. We really started to see a trend as Mark explored the videos, and he eventually came to the conclusion that he really wanted a 4-wheel-drive Toyota. He was most attached to the idea of the Tacoma, but I really made him sell it hard to get me to accept it. From what I’d seen of Toyotas and other mid-size trucks, they looked like ridiculous toys that weren’t real trucks at all. I was skeptical, to say the least. They are almost as expensive as Silverados, and do not seem nearly as powerful.

Mark will be happy that I’m admitting this, but in the end, I came to agree with him that a Tacoma would be good for us, and he was right. They are a little smaller than Silverados, and you’ll recall I mentioned that the sheer size of the Chevys was a problem for me. They are also in the top ten list of cars that cost the least to maintain in the United States. That was  real selling point for me. The Xterra never needed serious maintenance over the 13 years we owned it. It only needed minor work that any older car would require, as parts simply wear out. My dad’s new Silverado 3500HD, on the other hand, needs constant maintenance for its computers and its remote start, and we’d even had issues with the brand new Suburban my parents bought last year. Tacomas don’t have issues like that.

In fact, Mark asked our mechanic, who does foreign cars, what he thought of Tacomas, and he told us that he never saw them, because they never need work. We respect his opinion, and though that evidence is anecdotal, the number of people shouting praise for the Tacoma on the internet is truly impressive. With all of that information, I finally decided that we would purchase a 2017 Tacoma.

With that decided, we started looking at models and builds and costs. Mark researched toppers, and I looked into seat covers. When we cleaned the Xterra to sell (Which we did privately, so we’d make a reasonable profit), I realized that Ripley was really hard on the seats. I ended up choosing Wet Okole seat covers, which are made of neoprene and waterproof. I don’t have a photo of them to put here, but know that if you want custom fit waterproof seat covers, you can do no better, as long as you are willing to pay the price. They are beautiful. Mark picked an ARE Z-series topper, and with all of the outside parts decided, we moved to the inside.

The very first time we sat in a Tacoma, we realized immediately that we could not have a moon roof, which comes standard with a lot of their cool technical upgrades. You can’t get seat-heaters without a moon roof unless you custom-order your truck, which we were not willing to do. We’ve loved seat heaters since our trip to Alaska, so we were sad, but not dissuaded. Why can’t we have a moon roof, you might be asking yourself? Well, it lowers the top of the car about 1.5 inches, which makes it too short for Mark to fit. He’s 6’4, so be aware of that if you decide to look into Tacomas for yourself. You’ll have to be pretty tall before the moon roof matters.

In addition, we wanted grey or black, and we wanted the 4-wheel drive. In Tacomas, this means that you get either a TRD Off-Road, or a TRD Pro. There’s also a Limited, but that’s just the fancy version with leather seats and such. The Pro adds a few off-road upgrades that are really unnecessary unless you’re looking to be cool. Our overlanding groups call the Pro silly, since you pay more for upgrades that Toyota didn’t make but you didn’t choose. That, and the Pro branding, of course. Regardless, we stuck with the TRD Off-Road.

It was actually hard to find the truck we wanted. In addition to wanting a gray or black Tacoma without the moon roof, we needed a long bed, because the short beds wouldn’t hold Mark’s bass. We found one in Ardmore, and then tried to buy it in Grapevine, but Ardmore refused to sell it to us, so Grapevine had to scramble to find another, since they’d already sold it to us. They did find one being delivered to Louisiana about a week later, and we finally got it not long after that, minus the promised window tint and wheel locks, which we then had to return it to the dealership to receive. That part was a bit of a joke, though I was overall pleased with Texas Toyota. If you’re looking in this area, save yourself some time and don’t both with Toyota of Lewisville. Those guys were not pleasant to deal with, and tried to get away with a lot more than we were comfortable with.

I can’t tell you how happy we are with it so far, because I’m not 100% sure, but I can tell you that Mark is quite in love. I like the way the clicker works, with locking and unlocking the door. You don’t put the key in it to start it, like a lot of modern vehicles, it just has to be in the cab. You can unlock the door simply by touching the inside of the handle while having the key on you (like in my purse), and you can relock it by swiping your fingers across a sensor on the handle as well. I feel like this is all technology that is just waiting to break as it ages, but we shall see.

The suspension feels really nice, which may be simply because our previous vehicle was so old that the suspension was just shot (which it was), so this feels better because it is new. Or, it might be that the suspension for the Off-Road really is particularly nice. We don’t have a frame of reference. We can also do hands-free calling now, which has been a real bonus, since Denton passed an ordinance that will go into effect sometime this year that essentially bans touching your phone while driving. That’s a can of worms I won’t open here.

For now, I’ll say that I’m enjoying it, Mark is really enjoying it, and Ripley has a harder time getting in, and sleeping with her head behind the seat belt. She’s warming up to it, though. We’ve only driven it to Black Mesa, and it doesn’t even have 3,000 miles on it yet (it came to us with 9), so we’ve got several thousand more to spend with it before I’m sure how I feel about it overall. I know the topper leaks a little, and dust gets into the bed from the holes in the bottom, but I feel like those are things we can fix. I’m sure if you follow along on our adventures, you’ll hear even more about it.