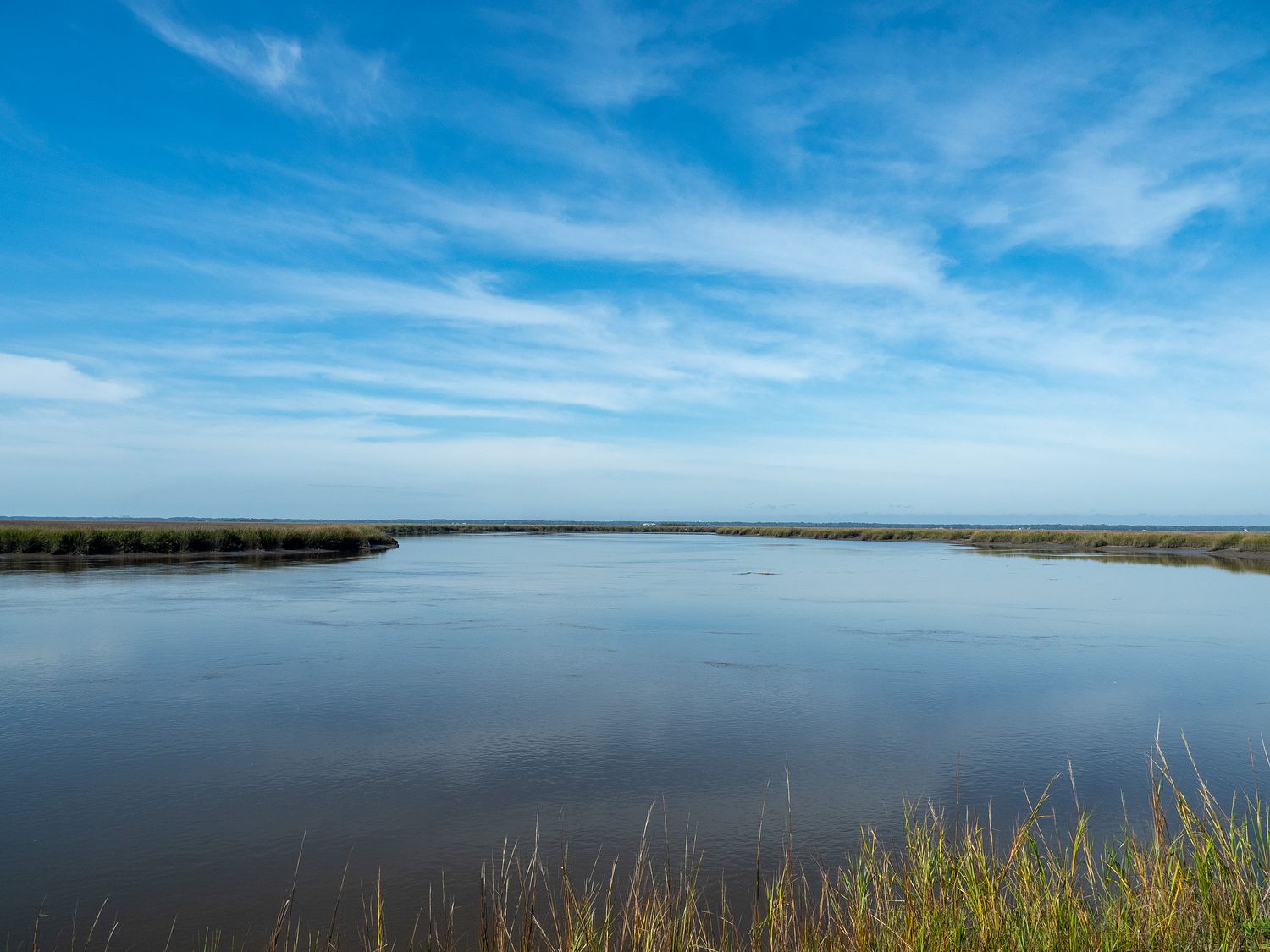 Since our run this morning would’ve been another lame run through residential streets, and we had planned two rest days into our trip, we decided not to run this morning. Instead, we lounged in bed and played on our phones after we woke up. It was nice to take a little break, though the weather would’ve been nice for our run. I wish more towns down here had nice trails.

Instead, we showered, had breakfast, and packed up. We didn’t leave too early, since today was another day with only about 2 hours to drive and 2 parks to visit, so we were in no hurry. We drove north from Kingsland further into Georgia toward an area they call the Golden Isles, where our first park was located.

Along the way, we stopped at a dog park Mark spotted along the road to give Ripley some exercise and a bathroom break. She had so much fun zooming through the park like she’d lost her mind. Unfortunately, she also got pretty muddy, so we also spent about as long cleaning her up as she’d spent playing in the park. She would tell you that it was worth it, but I’m not so sure. It was some serious mud.

With a freshly exercised and watered puppy, we continued over into the islands. Most of the drive was on the highway, but the last portion took us off of the main road and into some cute little towns. Actually, several of them were quite wealthy, and one was even an entirely private island. We weren’t even allowed to drive back into that one. They had security at the entrance to keep plebs like us out.

In any event, our main goal was Fort Frederica National Monument, which we made it back to easily enough. We were surprised to find the gate open, since the parks are still technically closed. The visitor center and bathrooms and such were all locked up tight, but the park itself was completely open. Giving the huge walking and biking paths that come into and out of the park, it seems like it just wasn’t feasible to close the thing.

Fort Frederica is the remnants of a town and a fort that were originally built by the British in the 1740s. The fort was created to defend against the mean old Spanish, who had been fighting with the British over territory in the area. It was already mostly abandoned by 1755.

The national monument has clear ruins of several buildings, as well as the obvious locations of former streets and alleys. A great deal of archaeological work was done to restore the site and excavate the ruins. The park covers 285 acres, which is pretty big.

We got Ripley out of the truck and were able to walk around the former town and fort, down little streets that people walked in the 1700s. It’s pretty neat to think of it that way. Since the park was closed, we were the only ones there for most of our visit, and the weather was a pleasant 73, with plenty of gorgeous shade trees to keep us out of the sun.

In all honesty, even though there isn’t much left of the fort, the park is very cool since the land is just so nice and there’s so much to see. We had a lot of fun there. I think it’s the best thing we’ve managed to see on this trip so far.

After the park, we stopped at a beach on St. Simons Island to look around and get Mark some sand. We had finally finished our first book, so while Mark scouted the beach for the best sand, I rummaged around in the back of the truck until I located our next book, Riptide, which is by the same pair of authors as our previous book. I got this one for Christmas and haven’t read it before, so Mark can’t ask me what’s going to happen next in this one. Somehow I bet he asks anyway.

The weather was really pleasant on the little beach, and though it wasn’t the nicest beach, it was still interesting. The water and the sand sort of wound together along the shore, leaving huge sand bars extending out from the beach into the ocean, with shallow strips of water in between. People were out digging for something, but Mark and I don’t know enough about the ocean to say what they might’ve been looking for. Ripley enjoyed the sea breezes, though we didn’t let her get sandy out on the beach, which I think she would’ve liked to do. She’s so mistreated.

We had to backtrack a little to get out of the island area and up to our next park, but it wasn’t too bad, since it was already after noon and Mark and I were ready for our lunch. We ended up driving back to Brunswick to get something to eat, since we didn’t find anything we could easily get in the smaller towns on the way.

We did discover that Mellow Mushroom started in Georgia. We figured it had to be something like that, since the area is just full of them, and most of them are nowhere near as fancy as the ones that have sprung up in other places around the country, like the ones at home in DFW or up in Colorado. These look more like cheap, hole-in-the-wall pizza places. It’s a little funny. I guess everyone starts somewhere.

In any event, lunch was a burrito and chips from what appears to be a local chain. It was fine, but nothing to write home about. I am consistently disappointed in the salsa I get anywhere that isn’t in the southwest. Nobody else seems to know what spicy means. Nothing out this way has habanero peppers in their spiciest salsa.

After lunch, we had to hop back on the real highway to head to our next park, Fort Pulaski National Monument. This fort was completed in 1847 to protect against foreign invasion, but was overtaken by the Confederates during the Civil War only a few years after its completion. The fort is huge and in gorgeous condition, not even bad enough to be called a ruin. I was really looking forward to seeing this one, but alas, the government is still shutdown.

In fact, the bridge leading to the island where the fort is located was completely closed, and while we could’ve walked closer, it would’ve been at least a mile to the fort, and we couldn’t have gotten inside. We walked out onto the bridge to look around and debate our options, since we could see it from the bridge and from the opposite shore, but in the end we decided not to bother, since we are going to have to come back to see the inside of the thing anyway. The government shutdown has really packed a ton of disappointments into this trip.

Fort Pulaski is actually out on the water past Savannah on Tybee Island, but not all the way to the coast. We drove out that way, to where the road ended. Our original goal was a lighthouse out that way, but we didn’t end up getting any photos. The only angle we could get was directly into the sun, so we had to pass.

Still, the little town was cute, and a lot less pretentious than the Golden Isles from earlier in the day. It had a little dog park, too, but we eventually decided against that one, since it looked as muddy as the last one. We did stop by another beach to take a look around, but they didn’t allow dogs on the beach, so Mark got some sand and we left, a little disappointed.

We drove back into Savannah just after 4:00pm after waiting for a while on the only road out to Tybee Island thanks to a pretty nasty wreck. The road we came into the city on had a dog park right on it, so we stopped there for Ripley’s second park of the day. She didn’t have as much fun at this one, since it was full of other dogs and Ripley is a little anxious around many or large dogs. Still, she got a little running in, which seemed to make her day.

After that, we went and checked into our hotel, unpacked the car, and made our dinner plans. In the end, we drove over to Whole Foods for the hot bar, because we are nothing if not predictable. I found the options on the hot bar a little lacking at this particular location, since everything was meaty or fatty, but I managed some nice fruits and vegetables from the salad bar.

We’re back at the hotel now, and the stinky puppy has had a bath to remove all of the funky mud smell from the first dog park of the day. She didn’t appreciate it, but I’m much happier, since I’m the one she wants to snuggle with.

Tomorrow we will go on a run through Savannah then head out to pick up a couple more parks. It looks like they still won’t be open, but it should still be a warm, lovely day, so it won’t be too bad, even if we don’t get to see anything.