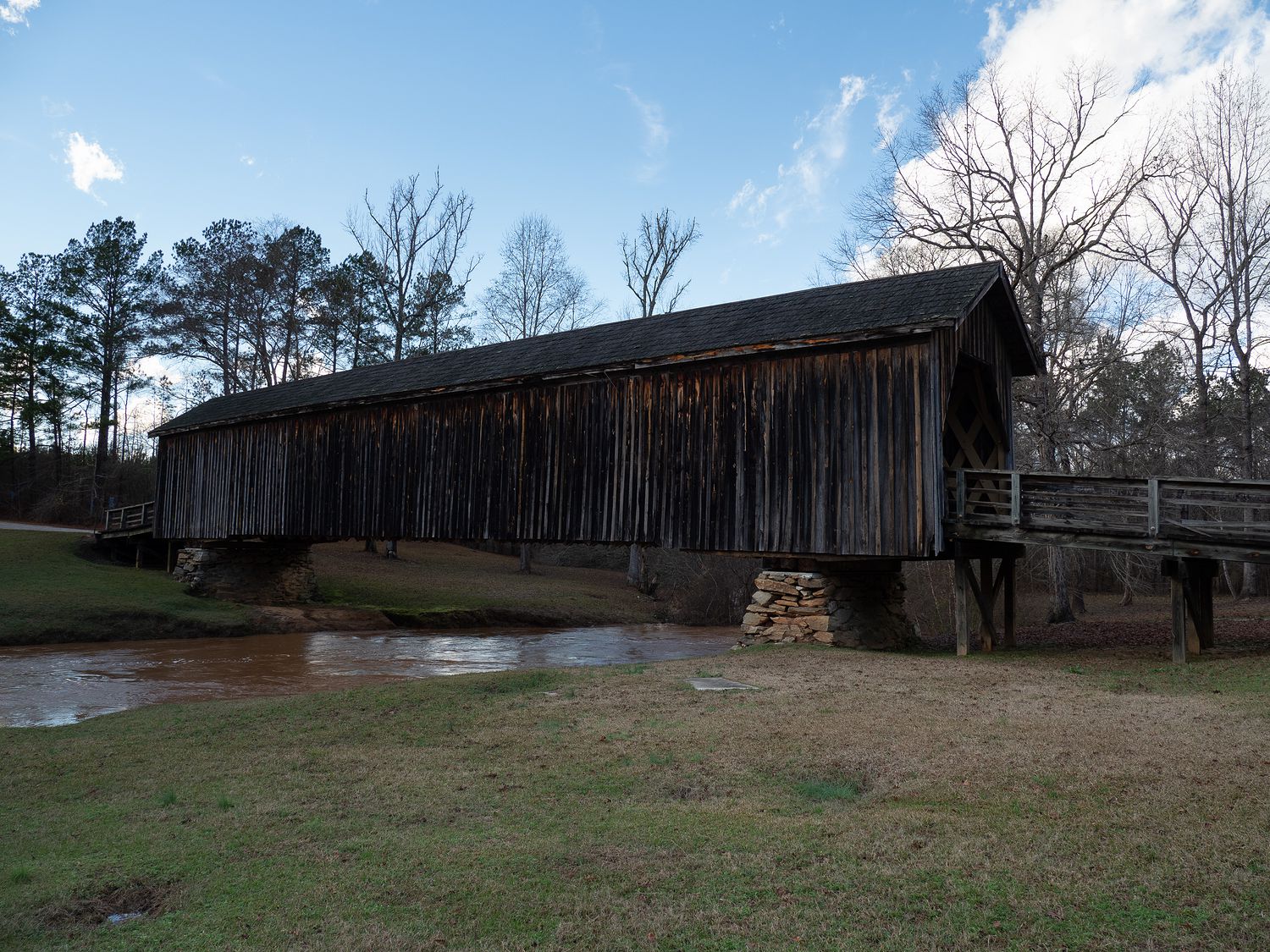 The coolest thing we did today doesn’t include any photographs. It was, of course, our run across the Ravenel Bridge in Charleston. We were up before the sun (which is like 6:30 in winter) and out of our hotel shortly after so we could make it across town to run on the bridge before it got too busy.

It was foggy this morning, which made us a little sad, but it was still warm enough that we didn’t need running jackets, so that was nice. The bridge is 2.5 miles one way, so our run was a total of 5 miles across and back. As you can imagine, the bridge has quite an incline as it cross the water, and on the return route, the incline lasts about 1.5 miles. By the time it starts to go back down, you’re really feeling the hill. It’s a bit of a climb.

Regardless, the view was gorgeous, running across the bridge was a lot of fun, despite all of the traffic, and I’m really glad we got the chance to do it. The best run we do is still the one in Moab back into the canyons, followed shortly by Santa Fe and a couple of towns in Colorado, but this one is up there for sure.

After our run, we drove back to the hotel and showered and packed up, as usual. The distance from our hotel to the bridge was a little long, so we got a later start, but nothing terrible. For breakfast, we drove over to a little bakery and got biscuit and egg sandwiches that were only tolerable. Next time I’m rather have Panera or Dunkin’ Donuts. That’ll teach me to try the local cuisine. Who makes biscuits that are as dry as cardboard in the South?

Just outside of Charleston, it started to rain, and it misted for a good deal of the morning. We didn’t do much stopping until lunch, just stops at gas stations for breaks and some ice. Unfortunately most of the day was relatively quiet.

For lunch, we stopped at The Chicken Salad Chick, which is a chain restaurant we’ve seen before, but never tried. They make something like 15 varieties of chicken salad, as well as pimento cheese and egg salad. You can either get it as a scoop of the salad or a sandwich.

Mark had spicy pimento and I had egg salad, both on sandwiches. They come with a side and a little cookie, which is a lot of fun. I was worried, because the pickles in my egg salad were sweet and not dill (which is a little sacrilegious in my book), but the pickles were so few and far between that it didn’t ruin it at all.  Mark really enjoyed his spicy pimento, too, though not as much as he does the stuff I make for him at home. I hate pimento cheese, but apparently I make it well, because Mark likes it. I wouldn’t know. I can’t even bring myself to taste it again, though I did try his sandwich today. It still tastes way too weird to be real food to me.

After lunch, it started to rain much harder, and we ended up driving through a line of pretty good storms. Some of the rain was so intense that we were going 30mph with our flashers going on the highway, riding behind the giant trucks that were going just as slow. The rain was so heavy at times that we couldn’t see the tail lights of the vehicle in front of us.

Eventually, right before the worst part of the storm, the sky suddenly got darker, and Mark and I both commented on it at the same time. That’s about when we drove into the real downpour. We even saw a car a little later with a crushed front bumper and mud all down the side that looked like it had been in a ditch only about an hour before. The driver had their flashers on and was limping the little car back into a town.

Just outside Macon, Georgia (which Mark swears rhymes with bacon), we stopped at the only park we’d decided to try to visit today: Ocmulgee National Monument. We hadn’t even looked up what the park was, exactly, it just happened to be on our natural route.

It turns out, the park is another of those that preserves burial mounds from prehistoric natives from the area. It was locked up tight at the entrance, and once we discovered it was burial mounds, we decided it wasn’t worth the effort to hop the fence. We will come back through this area again and visit the park properly, assuming the government ever decides to reopen its doors.

After we left Ocmulgee, we realized we hadn’t really taken many photographs today. In fact, you probably noticed that our first picture of the day is one from lunch, which means that we spent all morning without taking a single photo. That’s not really like us at all.

Since we were so deficient in the photo department, we started looking for something interesting to see, and Mark spotted a sign along the road pointing back to an old covered bridge, so we took a chance and hopped off of the main road to go see it.

The bridge is called Auchumpkee Creek Covered Bridge, and it is just outside Thomaston, Georgia, according to the internet. I didn’t happen to check the map. According to the sign next to the bridge, it is 120 feet long and was built in 1892 for $1,200. It isn’t in use now, but it did make for a fun little stop on our drive. The flooding in the area was pretty obvious there as well, with the creek beneath the bridge swollen with muddy water.

We rolled into Columbus, Georgia, our destination for the night, around 6:30pm and checked into our hotel. Once we were unpacked, we left the puppy in the room, intending to drive across town to Mellow Mushroom for dinner. On the way, we spotted a Chipotle next to a used book and CD store, and we decided to stop there instead, since we were feeling a little lazy. C’mon guys, the drive to Mellow Mushroom was going to take 15 minutes. Ugh.

The resale store turned out to be a Hastings that someone purchased and revamped, and it was nice enough, though Mark managed to make it out without purchasing a single $1 CD, which means it could’ve been better. After that, we picked up our Chipotle, drove across the parking lot back to our hotel, and had dinner and watched YouTube. An exiting night for sure.

Tomorrow is mostly a driving day, and the two parks we were originally planning to visit are entirely indoors. The government shutdown means there’s absolutely nothing there for us to see, most likely, so we will probably spend very little time in them.

We don’t get to run tomorrow, and it will be quite a bit colder tomorrow night, but we are planning to run in Vicksburg at the military park on Sunday morning, so we have that to look forward too, which should be fun despite the fact that it’s a lot colder over there.