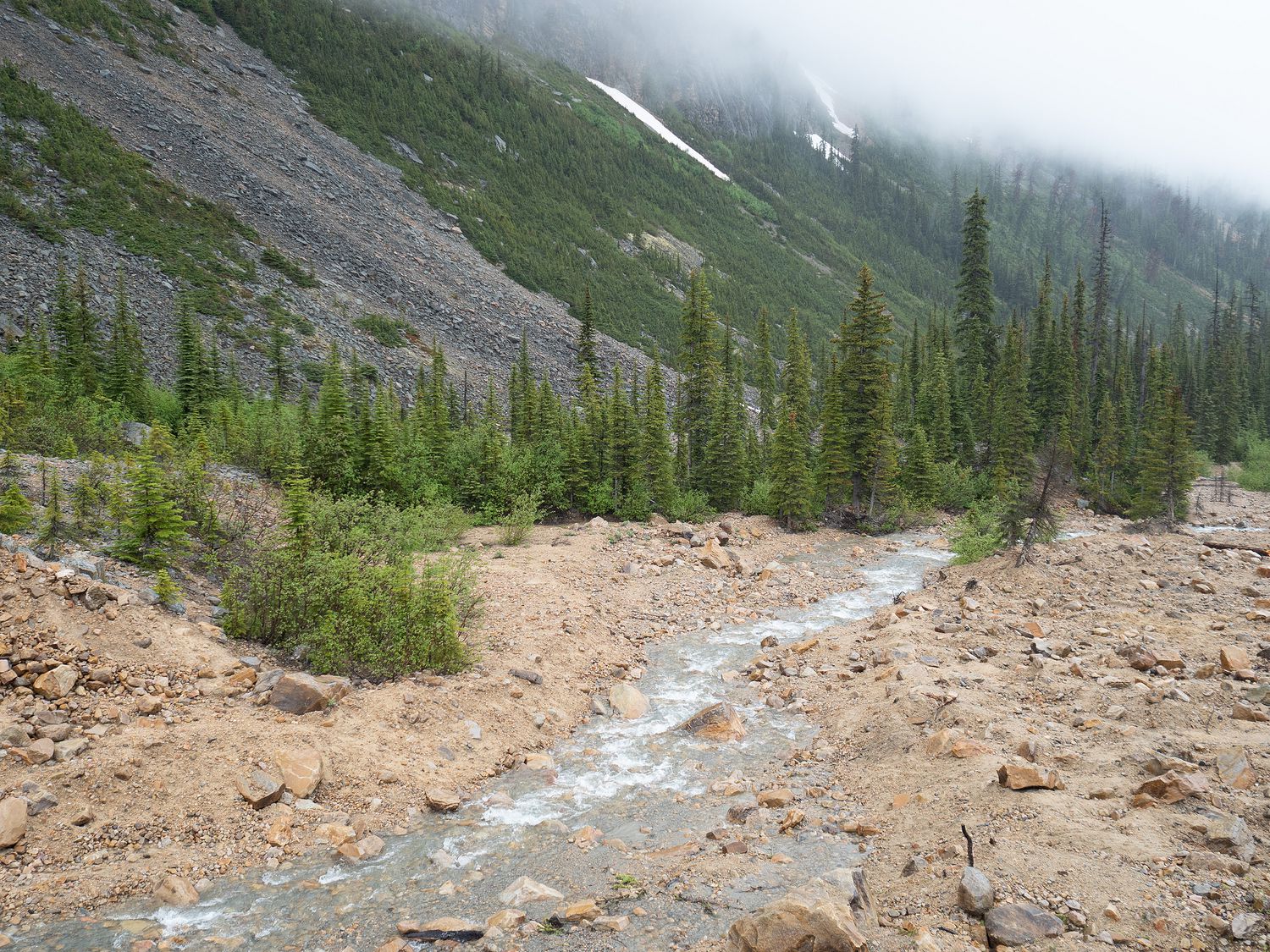 Well, we had fun today, but it was a bit of a bust in some ways. For the whole trip, despite some cooler temperatures and a smattering of rain (and snow!), we’ve been very lucky weather-wise. Our luck ran out today. It rain pretty much all day, right up until around 5pm, when we finally started to spot some blue sky and the rain decided it was done for the day.

It was only misting when we got up to go run, which wasn’t particularly unusual. We didn’t think much of it as we put on our hats and jackets and went out to do our trail along the length of the road through the town of Jasper. We all got a little wet, with water dripping from the brims of Mark’s and my running hats, and Ripley’s fur plastered to her head and legs. Still, it wasn’t too bad. It was just mist, really.

By the time we had showered and cleaned up the room in preparation to go out and enjoy our last day in Jasper National Park, it was raining in earnest. It still wasn’t exactly pouring, but the rain was heavy enough to get you wet relatively quickly, and we had our rain jackets on to leave the hotel room. Up to this point, we’ve just packed them along at the start of each day.

Since we were sort of waiting out the rain, not realizing it was going to last most of the day, we decided to go over and get some breakfast from The Other Paw again, which we’d been planning to do tomorrow instead. Since we had more time today, we decided to go for it. Today, I had a blackberry streusel muffin, and Mark had another Morning Glory muffin and a mixed berry tart. We met another couple in the bakery that was visiting from Hawaii. We noticed their national park shirts, and stopped by their table to chat with them while we waited for my tea to steep. They were telling us about what Hawaii Volcanoes National Park looks like since the big eruption last year.

After breakfast, our original plan had been to drive to the top of Mount Edith Cavell to take some photos of the glaciers at the top, but since the rain had the clouds so low, obscuring the tops of the mountains, we decided to switch things up and go see if we could see something a bit closer to the ground: the Miette Hot Springs.

Much like the other hot springs we’ve visited on this trip, the Miette Hot Springs is just hot water from the springs pumped into a pool. That wasn’t particularly interesting to us, and originally we handn’t planned to go. Luckily, there’s also a trail that runs back to the source of the hot springs, where it breaks above ground and you can feel the water without having to pay to get into a pool.

On the way up there, we sat in construction for a while, and then only pulled off for Punch Bowl Falls, because it was raining pretty heavily for most of the drive. The water fall was small, but it fell in two parts, with the first portion falling into a bowl-shaped depression beneath the tail of water, and then the run-off from the bowl spilling out into another pool below. Mark and I ran out to look, then ran back to the car. It was too cold and wet to enjoy it.

It took about an hour to reach Miette Hot Springs. We had hoped the rain would have slackened by the time we arrived, or that this new section of the park might have lighter rain, at least, but no such luck. We sat, waiting for the rain to lighten up so we could hike the trail, for 30-45 minutes since we didn’t have anything else we could do if the rain didn’t clear, but it never did.

Finally, we gave up on the hot springs and turned to go back to the town of Jasper. We sat through our construction again, and sighed as we looked around outside the truck at what should have been beautiful scenery, which was instead hidden completely by low-hanging clouds and fog. It was a little depressing.

We made it back to Jasper around 12:30 or 1:00pm, and we decided we may as well get lunch. It was still raining, but we managed a parking space close enough to the place we wanted: the Jamaican restaurant we saw when we were out searching for souvenirs. The town and hotel were very full. It seems none of the other tourists had really gone out in the heavy rain. We stopped to look in at a breakfast place as we went past, since I was (for some inexplicable reason) craving a waffle, but they had a 30 minute wait for a table.

Our Jamaican restaurant, called the Spice Joint, mostly served variants of grilled cheeses. Ours was, of course, a veggie grilled cheese. It included tomatoes and spinach and a few other veggies, and was dressed with a balsamic reduction. It was tasty, but the best part was the “Jamaican Pattie,” which was a cross between an empanada, a hand pie, and a samosa. Mark and I split one. It was delicious. The grilled cheese was good, but the pie thingie was amazing. I wished, after we’d ordered, that I had just gotten those for lunch instead.

My weather app told me that the rain would clear by 2pm, so we decided to go on up our mountain road, which was our original goal this morning. The road to Mount Edith Cavell was in the same direction as the Columbia Icefield, so we turned once again down the Icefield Parkway. We stopped briefly at the ranger station to be sure the road up the mountain was open all the way: we’ve already been burned by closed mountain roads on this trip. Luckily it was, so we were off.

It was still raining enough that we decided to start at the end of the road, furthest from us, instead of the beginning. We thought maybe the rain would actually clear by the time we made it to the top. The furthest end of the road started down by Athabasca Falls, so we drove down there and turned onto the road leading back to the top of the mountain. The rain did not let up on the drive.

We made it to the top of the mountain only to see clouds and more rain. Still, we were up there, so we decided that we would wait a little while, then brave the rain anyway to at least try to catch a glimpse of the glacier. We sat for another 30 minutes, but nothing happened, so we gave up and trekked up the trail a little ways to try to see the glacier. Of course, we couldn’t see anything but fog, but we did figure out where the glacier was, at least. We just couldn’t see much more of it than touches of white, briefly showing through patches of drifting fog.

By now, we were a little frustrated with our day so far. We finished the Mount Edith Cavell road and then took the Icefield Parkway back into the town of Jasper, It was around 4pm, and the rain had started to taper off just a bit. We thought we would wait it out a little longer, so we ducked into our hotel room for about an hour, peeking out every 10 minutes or so to watch the progress of the now partially blue sky.

By 5pm, the rain had mostly stopped and we could see quite a bit of sky, so we went out to see some of the lakes around town, as they were the last of our sights to see in Jasper National Park. Only one of the lakes was really accessible, since the other was some sort of private lake that only people who rented somebody’s cabins could use. It was a little strange, honestly.

Pyramid Lake was accessible to all, and was the lake that Mark and I had originally intended to take Ripley canoeing on, but it was just too cold on this trip. We had planned to rent a canoe there, since they allowed dogs, but with the weather being colder than usual and particularly wet today, we never had the chance. I think we would like to try it, though. Maybe we will do it the next time we visit, or maybe we will find somewhere closer to home to test it out. I’m sure we can find something like that in Colorado, which would be just as cool.

We had fun puttering around Pyramid Lake in the nicer weather, but dogs weren’t allowed on the beaches around the lake, so we didn’t have as much fun as we could have. Poor little Ripley, who’d been cooped up in the truck most of the day because of the rain, had to watch us walk around the edges of the lake, even after the sun came out. She was not a happy camper.

Dinner was food from the cooler back in the hotel room. Today was our last day in Jasper. Tomorrow morning we will get up early for our run, then book it for Saskatoon. None of us have ever been to Saskatchewan, and Ripley and I haven’t ever been to Manitoba, so those are our next destinations. We’ve picked out a few roadside attractions to break up the drive, and we should see one more national park tomorrow.