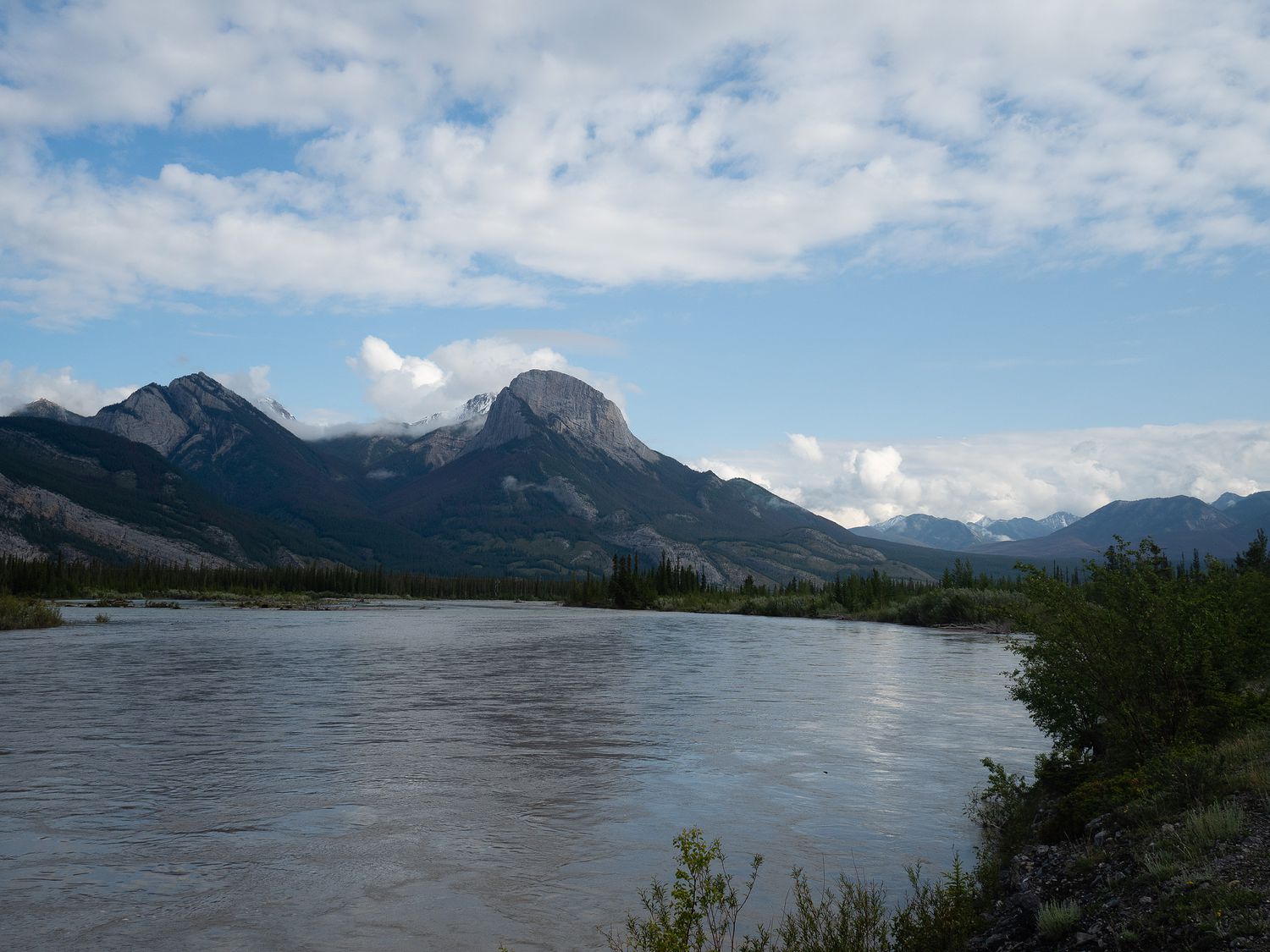 Well, today was mostly a driving day. It was beautiful, too, since we didn’t have time tor really get out and enjoy it. Unlike yesterday, the clouds were burning off, the morning was clear, and it wasn’t raining. We could see the mountains as soon as we got up at 5 to go run, even though the night clouds were still moving out. Cloud cover last night must’ve been really thin.

We did our usual Jasper run this morning for the last time. I’m going to miss the trail, since it so nice and convenient to our hotel. I can definitely see staying in the town of Jasper again. I think, though, the next time we visit this area, I would skip staying in Banff and stay in Canmore, just outside the park. The same is true of Radium Hot Springs. Invermere would’ve been a better place to stay. The towns are cheaper and have more food options, among other things.

In any event, after our run we packed up the truck. It felt a little weird to really be getting ready to leave, since we’d been staying here for so many days. We joked as we drove east out of Jasper that the park was saying goodbye, since most of the mountains were visible as we left. It was a nice sendoff, I have to say, even if we did have to sit in construction to get out of there.

Our destination for the night was in Saskatoon, and besides Edmonton, there’s not a whole lot between Jasper and Saskatoon. Sure, there are a handful of larger towns/cities, but not many. Mostly, the drive was empty miles punctuated by tiny towns with roadside attractions designed to attract tourists. It did work on us a couple of times though, and I think it will work again tomorrow. It breaks up the monotony of the road, and gives us a place to get out and stretch our legs and take some photos.

Our first roadside attraction was a giant dragonfly. It was not a great example, in my opinion. They didn’t even bother to round the wings, and it wasn’t all that big. It does hold the dubious honor of being the largest dragonfly in Canada, though. If you want to see it, you can find it in Wabamun, Alberta. I think the world’s largest dragonfly sculpture is in Georgia, but I didn’t have too much luck verifying that 100%.

A little further down the road, we stopped in Edmonton for lunch. Finding food that was easy enough to get to wasn’t a great experience, so we decided to just go with the old standard, A&W, for what will hopefully be our last veggie burger of the trip. While they are good, I was not meant to eat so many veggie burgers and so many potatoes. I was joking with Mark that all we are going to eat when we get home are beans for at least a week, since I love them and we haven’t had any on the trip. If you need recipes for food made with beans, you know who to email.

After lunch, about a half hour past Edmonton, we stopped at our last Canadian national park of the trip: Elk Island. Elk Island was originally created to preserve land for a large elk population. Now, the park is an important conservation area for the American Bison. It also has a nice lake that people use for recreation. It’s not a very big park, but it is pretty, and once again, Canada shines on the green, lush grass front.

We took a turn around the Bison Loop Road, which is supposed to be a good place to see some of the park’s bison, but we didn’t see anything on our journey around the loop other than grass and small trees. We played around with the cameras a little, and took some pictures of Ripley in the red Muskoka (Adirondack, for us Americans) chairs. From my understanding, these red chairs can be found somewhere in every Canadian National Park. I’ve seen a bunch of their parks so far, and I think all of them have had some. Jasper and Banff each had a ton.

One of our other roadside attractions of the day was the Vegreville Egg, which is a giant “pysanka,” or a Ukrainian-style Easter egg. Ukraine has some serious Easter egg game. Just check out the photos if you don’t believe me. It really puts my single-color dip-dyed Easter eggs to shame. The designs on the pysanka are not painted on, but are instead inscribed with beeswax.

The area around the egg boasts a large Ukrainian-Canadian population, so we also saw other Ukraine-themed things in this area, like restaurants and museums. The egg is just an aluminum sculpture in many triangular pieces, and putting it together correctly required a team of mathematicians and computer scientists from the University of Utah. It was the “first physical structure designed entirely with computer-aided geometric modeling software.” It’s pretty cool looking, and I never would’ve guessed that much work had gone into putting the thing together.

Unfortunately, the Vegreville Egg pretty much ended the excitement for today, and we spent the rest of the afternoon cruising through the farmland of Alberta and Saskatchewan. The weather was perfect, at a lovely 72°F for most of the afternoon. I can see why people like to live here in the summer. It’s a little funny to see their crops, though, since the crops that I was recognizing along the road in this area were crops that had already finished growing and been harvested back home in Texas. The growing seasons are dramatically different. Theirs is much shorter, too. We’ll still be harvesting tomatoes and things until November, when we get our average first freeze of the season.

We rolled into Saskatoon pretty late, around 7:45pm. We hadn’t eaten dinner or anything yet, so we unpacked the truck into our downtown hotel as quickly as we could before taking off in search of dinner. The restaurants around our hotel were all sit-down restaurants, and given how exhausted we were, we decided against doing anything that would take very long. In the end, we picked a pita place that had a falafel pita. It was fine, if a little old. The falafel was way too salty.

Saskatoon is an interesting place. It feels like a smaller city than it is, and you can go from one block that feels like the downtown of any nice city, to the next that feels like the shady strip mall of a much smaller town. It does have a lovely river with a trail along it, which will be where we run tomorrow. We are looking forward to it, and the weather should be a little warmer than it has been in Jasper. It was almost 85°F when we rolled into Saskatoon.

After dinner, we were back in our hotel for the night. It was a pretty long day, so I am looking forward to getting to bed soon. The first few days and the last few days of any road trip are often the longest. Tomorrow we will need to stop by a grocery store before leaving Saskatoon to stock our cooler back up on Candian goodies before we cross back into the United States.

We’ve got a nice run planned for in the morning, and I think we will have our last Tim Horton’s breakfast, since we don’t have breakfast at our hotel. Tonight is our last night in Canada. Tomorrow we will drive over to Manitoba and then head down into North Dakota for the night. I’ll be glad when I can use my phone normally again. It’s so frustrating not being able to google whatever you want to know while you’re driving down the highway.