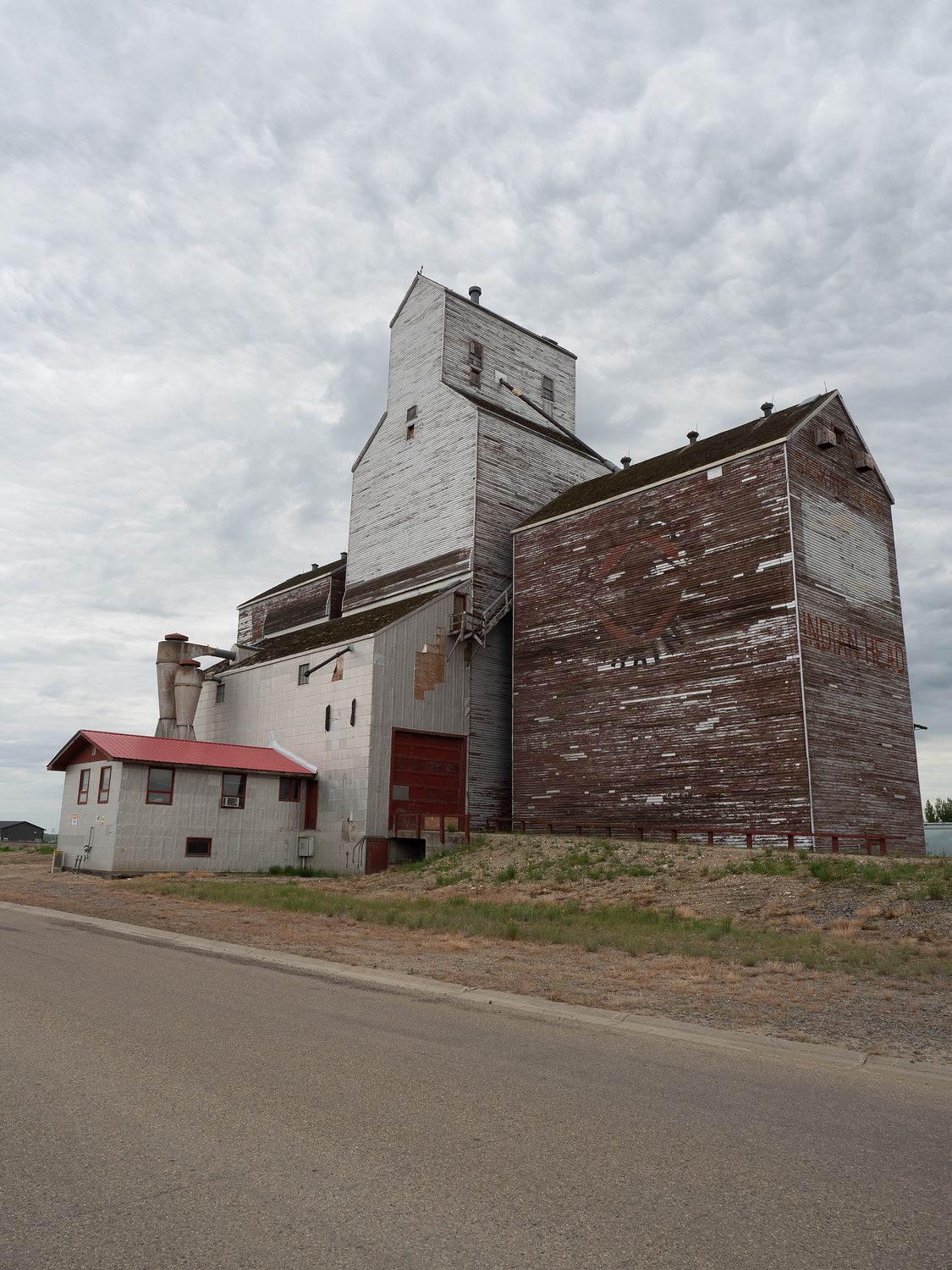 We are back in the U.S. tonight. I’m not sure I’m excited, though, see that it’s getting hotter and hotter the further south we go, and I do miss the mountains, but I will be glad to be home in a few days. This trip will be a total of 17 days, which is about the longest we have taken in a while, outside of our Atlantic Canada and Alaska trips. It is certainly the longest Mark and I have taken alone since 2011, and the first one of the length that Ripley has been on with only her parents.

At 5am this morning, we were up for our run. The air conditioner in our hotel room this morning didn’t work, though I’m not sure why. It was plenty warm enough outside for it to be working. Maybe no one else has needed it since winter, so it hasn’t been tested. It made it a little hot when we got back from our run, since the room was much warmer that we are used to.

Our run today was along the South Saskatchewan River, which was within walking distance of our hotel. Some of the grassy areas had signs up saying no dogs were allowed, but Ripley was allowed on the trail, so that wasn’t much of a problem. The only real problem we had with the prohibited grass was that the first section of grass we saw this morning was not dog-friendly, and Ripley had to go. Our hotel had no grass whatsoever. Ripley isn’t cut out to be a city dog. She requires soft green grass for her business. What a princess.

Back in our warm hotel room (we had to open the tiny crack of window that could be opened), we showered and packed. Ripley never helps. She just lays there in the way, looking so cute that it would be hard to ask her to move. You don’t think she might be spoiled, do you?

Breakfast wasn’t provided, so we stopped by a local coffee shop and bakery near our hotel to get something unique to the area, but apparently bakery, in this case, meant they made cookies and cakes, and not breakfasty things like scones and croissants. We were disappointed, but figured Tim Horton’s would make a reasonable substitute. They have a triple berry scone that I’ve been very fond of on this trip. I guess this will be my last one.

Since we already knew we needed to drop by a Walmart to pick up the last of the Canadian groceries we wanted, we picked a Timmie’s next door to the local Walmart Supercentre. Yep, they always spell center with the “re,” even when it’s just Walmart. It makes Walmart sound fancier, somehow. Now Mark has a new bag of All Dressed potato chips, and did I mention the Ketchup Pringles? I can’t remember if I did. He’s all stocked up on Canadian chip flavors, and I picked up a box of their tea that I like.

Today was mostly another driving day, punctuated with yet more roadside attractions. Our first attraction was the world’s largest coffee pot, which is in Davidson, Saskatchewan. It is 24 feet tall, and has a cup big enough to comfortably seat three people. They also have a few other attractions in the park with the coffee pot. One is a dump wagon, which was used during the building of the railroads from around  the 1800s to the 1930s, according to the signs there. The wagon would’ve been pulled by 4-8 horses, and was designed to have doors that released beneath the wagon, dumping all of the wagon’s contents out beneath the wagon. Mark recognized it, but I don’t think I’ve ever seen one before.

There was also an angry bird in the park that followed Mark and I around and chittered angrily at us, no matter where we went. I think she must’ve had a nest nearby, but since she was so generally angry, I couldn’t say where it was. That wasn’t our only wildlife encounter of the stop, however. We also saw more prairie dogs, these a little smaller than the first group we saw on the trip. Ripley, of course, totally lost her mind, and we couldn’t even get her out of the truck to take any pictures of her. She was laser-focused on the prairie dogs. Sometimes critters break her little hunting-dog brain.

After the giant coffee pot, we continued down the Trans-Canada highway toward Manitoba. In the town of Wolseley, we stopped for our second roadside attraction of the day: a swinging bridge. The bridge is a pedestrian suspension bridge that stretches 100 meters (328 feet) across Fairly Lake. It doesn’t seem that large in the photos, but one you are on it, it really starts to feel like it is a long way across.

Mark, Ripley, and I ventured about halfway out onto the bridge. It is called the swinging bridge because it swings wildly back and forth as you walk across it. The more you weigh, the more people on the bridge, and the faster you walk, the more it swings. It’s a little unnerving. With just the three of us on it, we were fine, especially since Ripley and I let Mark get ahead of us. A few minutes later, however, four more tourists got on the bridge, and suddenly we were really rocking back and forth. Ripley was definitely not pleased, and it was a little hard to get her walking again. Poor baby. She was spooked. At least we had it to ourselves long enough to have a little fun first.

Once we’d finished playing around at the bridge, we decided that we couldn’t wait any longer for our lunch and picked what was really the only restaurant we could have in Wolsely: A1 pizza. There wasn’t much ahead of us on the road, either, so we just had to make do with what we found. Luckily, it wasn’t bad at all, especially for a tiny local pizza shop.

We ordered out usual tomato and black olive pizza. The weather was still nice enough that Ripley could wait outside in the truck while we ate. The wait took about 15 minutes, which wasn’t bad, as the spot was popular (being the only place on the highway for a good way). The pizza was fine, even if the pizza sauce was to sweet. Mark can always predict when I’m going to say something is too sweet: it happens pretty much any time sugar has been added to something that is supposed to be savory. Blergh.

After lunch, we pushed on towards Manitoba. We really only had to make it across the border before we turned south to head back into the States, so the drive wasn’t too bad. Along the way, Mark had a blue sucker and turned pretty much his whole mouth, from lips to teeth to tongue, a startling shade of blue. Then, we had to stop for gas, so the poor gas station attendant probably thought we were insane: Mark the goth wearing his blue lipstick. I’m not sure Mark even thought about it in the moment.

We finally crossed into Manitoba late in the afternoon, and took our family photos with the sign. Mark also took some photos for another family group at the sign. Everyone always trusts us with their cameras. It’s a good thing we haven’t decided to turn to a life of crime.

We did end up driving a little way into Manitoba before turning south. We stopped briefly in the town of Melita, which is what they call a “banana belt,”  or a region that is warmer than the surrounding area, particularly in winter. It was quite warm in Melita, I have to say. To commemorate the fact that they are a banana belt area, they have a giant statue of a banana, so that was our final roadside attraction for the day. I had to get out my sun hat, which is the first time in a while that I have needed it on this trip. It will only get worse from here.

Our crossing into the US not long after the giant banana went smoothly, though the guys at the crossing were incredibly bored and spent 5 minutes quizzing us about where we live and what we do. I hope I bored that man to tears talking about computational linguistics. In the end, he sort of grunted at me and said, “Languages?” I just nodded. Yep. Languages. We finally made it to our hotel a little late and had cooler dinner. It was easier than going back outside.

Mark has our run all picked out for tomorrow. I think we are going to visit one or two US national park sites tomorrow. It’s nice to be back in the States, where our debit cards work normally and the gas prices are a little more reasonable. Our hotel is a La Quinta once again, so we can have hotel breakfast for the first time in a while, but I’m not sure we are going to eat it. Mark’s been talking about bagels. It will probably be another long driving day tomorrow, but at this point, most of them will be.