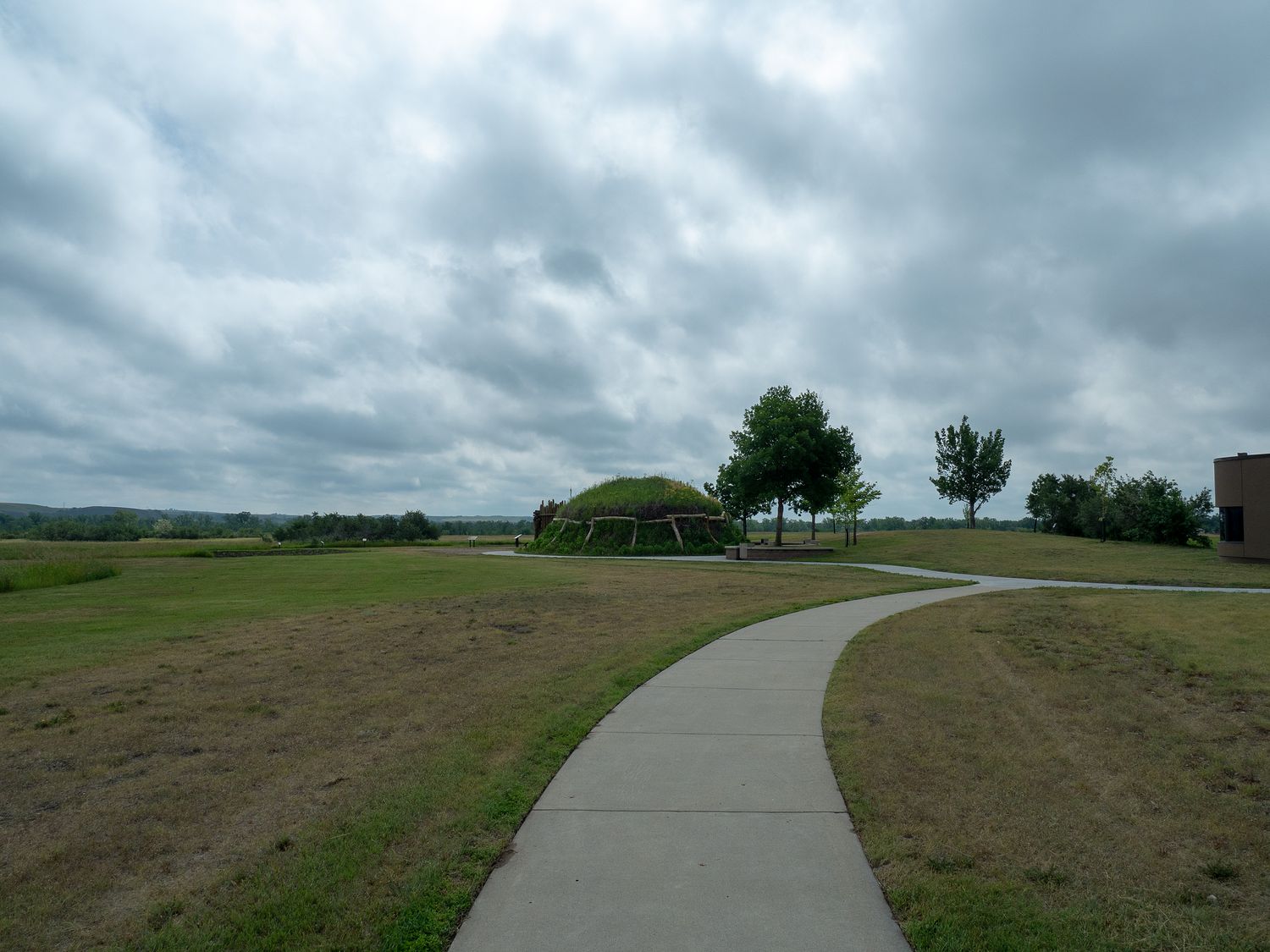 Well, we didn’t get to run this morning. It was thunderstorming when we woke up, so we went back to bed for another hour and a half instead. I guess that’s fine. The trail we’d picked out for this morning would’ve been okay, but not one of our better choices. We had to skip one day this weekend anyway, so today was as good as any other. It was almost cool leaving our hotel this morning, which is quite a contrast to what yesterday afternoon was like, and what the rest of the day turned out to be like. The spring-like weather didn’t last for long, I promise.

We were on the road early enough, given the extra sleep we got. We had breakfast at the hotel. Free breakfast is nice to have, but not always the best. Today’s was pretty normal for a La Quinta. I don’t think I’ve mentioned this, but La Quinta was bought out in the last year by Wyndham, and some things about it are changing. Some La Quintas may now begin charging a pet fee, which they have never done in the past. It was one of the main reasons we chose to stay at La Quintas in the first place. Last night was the first time a La Quinta has told us they have a pet fee since the change, but we didn’t end up getting charged the fee, as we had booked through LaQuinta.com.

I don’t know what all of this will mean for the future, but if they are going to start charging a pet fee often, I can tell you for sure that we will no longer be staying at them over any other hotel with a pet fee. We will just choose the best hotel from the ones with pet fees, and give no priority to La Quinta. We’ve been loyal customers for Ripley’s entire life, but its likely that this will change things.

In any event, our first planned stop of the day was only 1.5 hours from Minot, at Knife River Indian Villages National Historic Site. We took Highway 83 most of the way down, including a drive over Lake Audubon, which is home to the Audubon National Wildlife Refuge. The lake has over one hundred islands, which are home to a multitude of bird species. We did not stop at the visitor center because we didn’t realize that it had one as we drove past, though I found out doing a little internet research a few minutes ago. Maybe we will stop the next time we come through, if we remember. It’s definitely a pretty little lake.

We did stop at the nearby Garrison Dam on the Missouri River, which creates Lake Sakakawea. It is the fifth-largest earthen dam in the world, which is a pretty interesting distinction. The sign at the dam said it would require a train 16,000 miles long to carry all of the dirt that makes up the dam. Overall, the Garrison Dam is the thirteenth largest dam in the world. Oddly, I think that means that it is the largest dam that Mark and I have ever visited, given that the only larger dams in the US are Fort Peck, Oahe, Oroville, and San Luis, none of which have we visited. Canada has one that makes the list: Gardiner Dam, which is only a little south of Saskatoon. We could’ve visited it just a few days ago.

After the dam, we drove the last little distance to the Knife River Indian Villages National Historic Site. This park preserves some of the archeological and historical remnants of the Hidatsa people, who lived in the area beginning around the year 1600. It was also the site of a smallpox epidemic in 1837, which wiped out half of the native population. It looks like researchers believe that the disease was carried there by the Lewis and Clark Expedition. If you find things like that interesting like I do, I have two recommendations for you. First, you might enjoy reading The Demon in the Freezer, by Richard Preston, which talks about the Smallpox Eradication Program and smallpox in general. Second, if you want to learn more about smallpox or infectious diseases in general, you might enjoy listening to This Podcast Will Kill You, which is presented by two PhD disease ecologists. If you think that sounds pretty weird, forget I said anything.

Mark and I visited the lodge first alone, then went back for Ripley so she could stretch her legs and get a photo with the building. We went inside to explore without her, of course. The lodge is a very cool reconstruction. It’s made of large wooden lags, sawed in half, which are then piled over with dirt. Despite the recent rains, the wood seemed very dry inside, and grass and other plants grew on the earthen structure outside. It’s also about 10 degrees cooler inside than out, and the difference is probably even more noticeable when it is hotter. It was only about 80°F outside, but still the temperature change was nice.

It looked like the park held events inside the lodge, and the whole thing smelled of the burned wood you can see in the bottom left corner of the photo above. The smell gives it a strange sort of realism that might otherwise be lacking. I suspect the concrete floor isn’t exactly standard for any of the original lodges, but some concessions to modern building had to be made, I guess. The lodge reminded me of the Viking village we visited in Newfoundland, L’Anse aux Meadows National Historic Site. That was really the most interesting part of our day. We moved on after we finished examining the lodge.

We spent a lot of today on Highway 83, and while the highway is mostly a two-lane road, with one lane in each direction, it is heavily populated by big trucks that jam up the traffic and sling rocks at cars. And no, the rocks don’t come from getting too close to the backs of the trucks- oh, no. They are slung at you from oncoming traffic, which is such a delight, let me tell you. Our truck was hit trice today, though only the second on hit the windshield. The first bounced off the roof, and doesn’t seem to have left a dent. Unfortunately, the second one, which was obviously giant, left behind an enormous crack, which isn’t likely to stop spreading. To say I was annoyed would be an understatement. If we had been tailgating someone or something, we would’ve deserved it, but there’s nothing you can do against rocks that come from the oncoming traffic. We’ll see if I ever come back, Highway 83. I don’t approve of the quality of your road.

We also saw basically the entirety of those giant wind turbines traveling down our two-lane highway. The photo below shows part of the pole that holds one of them up. The trailers they carry those things on are enormous. The blades of the turbine are huge, too. It’s pretty crazy to see those things on such a small road. From what I understand, the one in the photo was pulling off with a bunch of other parts of the same wind turbine, since they had to take a detour off of Highway 83, as there are portions of the highway where the turns are too narrow for these trucks to navigate. I’m glad we didn’t get stuck behind them or have to meet them in a narrow portion of highway. Eesh.

We ended the day in Valentine, Nebraska, which is a pretty small town. There’s a National Scenic River in town, with a big recreation area attached, which makes it a somewhat popular destination for people in the area for summer weekends. Our hotel, which isn’t a La Quinta tonight, looks pretty busy. Everyone is most likely going to hit the river to beat the heat tomorrow.

For dinner, we mostly ate from our cooler, though we did swing by the local IGA for a few additions, like some fresh fruit and cottage cheese. We’ve found a running trail through town, too, which kind of surprised me. Apparently one of the old railroad lines through town was taken out sometime in the past, and they’ve turned the old railroad bed into a running trail. It even crosses the river. We will be trying to get up pretty early for our run, since it looks like this area has a heat advisory for tomorrow. It is supposed to be hotter here than it is at home in Texas.

Tomorrow will be another driving day, though we will start the morning with a visit to the National Scenic River and we do have a few more parks planned to see during the day. It should be a total of three, but the last one may be closed when we get down there, depending on how long it takes to visit the other two. It isn’t like Kansas and Nebraska are terribly far away if we do miss one. These are easy enough to get back to.