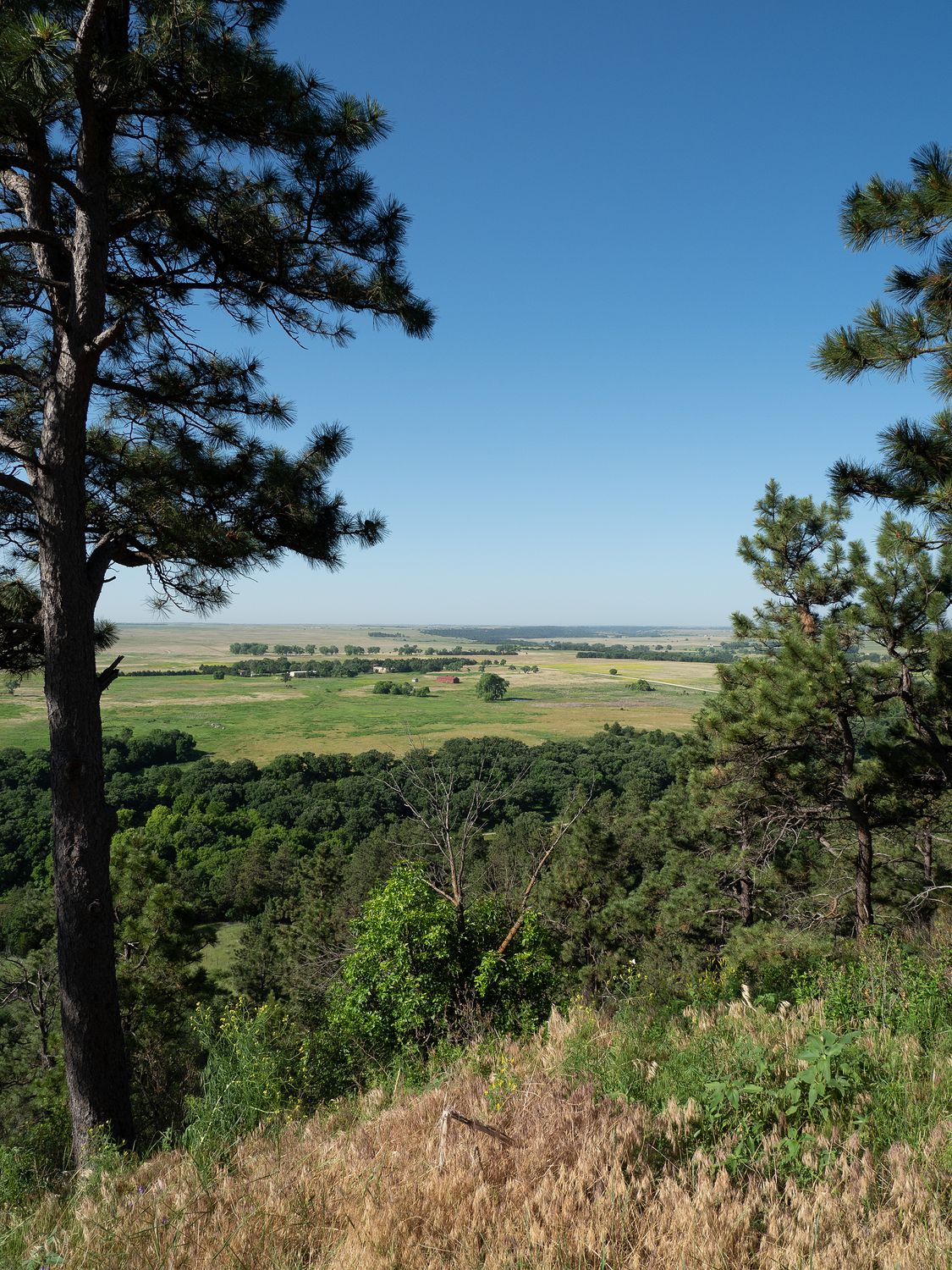 This trip is really winding down. Today we made it to two national park sites, though we were aiming for three. We missed a fort that would’ve been a little off the shortest path because we spent way too much time this morning driving around Niobrara National Scenic River, dodging cows and letting Ripley hang her head out of the window. To be fair, it was worth it for that alone. I mean, look at this picture. We took a video too, so it’s on her Instagram if you’re into that kind of thing.

I mentioned the trail yesterday, but our run this morning was on an old rails-to-trail that runs out over the river. It’s the strangest thing for such a small town, but it was a very nice trail. The surface was coated in that kitty litter-like stuff that goes on cheap tracks (like my tiny high school had when I was a kid), but it makes for a nice surface. We did a little over 4 miles, but it goes on for several more than that. The view over the river is nice. Too bad we don’t run with a camera. We made it out to run a little late, so it was sunnier than we wanted it to be, but that extra few minutes of rest was worth it, too. Pretty much all of our delays today were worth it.

Our cheap hotel didn’t have any breakfast for us this morning, but since we enjoyed the fruit from the grocery store last night so much, we decided to go back again this morning for more fruit for breakfast. I love fruit in the summer. I swear it’s like 60% of what I eat this time of year, especially at home.

We ate in the truck on our way to the national park visitor center, which we only ducked into briefly. It had just opened (okay, we weren’t that late), but it was already popular. This is a hopping place during the summer. It’s the only place to swim and have summer water fun for miles. Once we’d gotten our national park stamp and a map, we hit the road.

Off of the main track along the river, there are dozens of little country roads that go down to the water. Each one has something different, be it a campground or an overlook, or just a bunch of farms. Our first stop was at an overlook, which is on a little hill above the river valley. We took some pictures and finished our breakfast on the hill while Ripley stared out the window, enjoying herself since the weather was still so nice.

Back on the road, we realized just how much fun she was having with her head out the window, and we also kept seeing trees hanging out of the road, so we decided to pop on her doggles to protect her eyes from tree branches and dust. That was our only motivation, I swear. It had nothing to do with how adorable she looks with them on. You believe me, right?

Down one of our several jaunts to the river, we spotted a whole herd of cows jumping their barbed wire fence in a little gully where they had only recently knocked it down. Not just a handful, either, but literally the whole herd was trying to hop over the fence and cross the road. We didn’t have any way we could really help, so we continued on down the road, wishing we could find the people that owned the property, to let them know that their cattle had turned into a herd of Houdinis. Would you believe we actually found the guy only about a third of a mile away, working on his fence? We pulled over and shouted to him about the escape act going on down the road, and he cursed, then shouted a quick thank you and rushed for his truck. Good deed done for the day. I wonder how he ever got them back in the fence?

After spending a good chunk of our morning cruising back roads, we finally left the river after crossing over it at one of the bridges, where we stopped for some photos. We knew we’d spent too much time down there, but whatever. Sometimes you just have to roll with what happens. We headed further south, finally stopping at a Taco John’s for lunch in the middle of nowhere. There weren’t any better options anywhere in the vicinity, so we gave in. I’m sure I’ve already mentioned, but Taco John’s serves tater tots with their tacos, and I just can’t even. Ugh. Anyway, we had burritos and tortillas and queso. No dirty tater tots with our fake Mexican food, thank you.

Our second park of the day was Nicodemus National Historic Site, which is a park that protects what remains of a Reconstruction-era African American town, which was built in 1877 and technically still has a few residents who call it home. Its population declined considerably when the railroad skipped over the town, instead traveling through a town farther south. Once upon a time it had around 700 residents.

This historic site itself preserves five buildings in the town, which were part of the original settlement. These buildings are: Township Hall (which houses the visitor center), the African Methodist Episcopal Church, the First Baptist Church, the Nicodemus School District #1 Schoolhouse, and the St. Francis Hotel.

It’s worth mentioning that it was hotter in Kansas today than it was back home. In fact, it was 102-104, depending on where exactly we were. We had to be very careful while visiting the buildings and visitor center, since we had to leave Ripley in the truck with the truck running. Given how hot it was, even though the truck is new, I didn’t want to leave it running in the heat for too long. I certainly wouldn’t want it to overheat and leave the puppy in a hot car in that weather. As such, I was a little nervous in the visitor center.

Given that this park isn’t visited much, since it is very out of the way, the park rangers really want to talk about the park and help you look around, which is wonderful, but also a little troubling when you are worrying about your dog and your truck out in the heat. I felt incredibly guilty as we tried to escape the clutches of the well-meaning and excited park rangers.

After the visitor center, we took our pictures of the five buildings, one of which is still technically on private property, which makes it interesting that it also seems to be part of the park. I’m not really sure how that works, exactly. We took pictures of that building from the far side of the No Trespassing sign.

Back on the road, we hurried on toward Dodge City and our hotel for tonight. We finally made it a little later than we’d intended, even though we didn’t visit our third national park. We didn’t see much in the way of dinner that we wanted in Dodge City, so we ened up eating at IHOP, which we have not had in a long time. The once that used to be on the UNT campus has moved, and really, there are a lot better breakfast options. Still, IHOP does the trick when you want breakfast for dinner.

Tomorrow is the last day of our Banff and Jasper trip. I’ll be a little sad to make it home, since the trip was so much fun, but I am ready to see my own bed. We have a decent run picked out for tomorrow morning, and it looks like the weather will be hot, but as long as we’re up early, it should be bearable. Back in Denton tomorrow night!