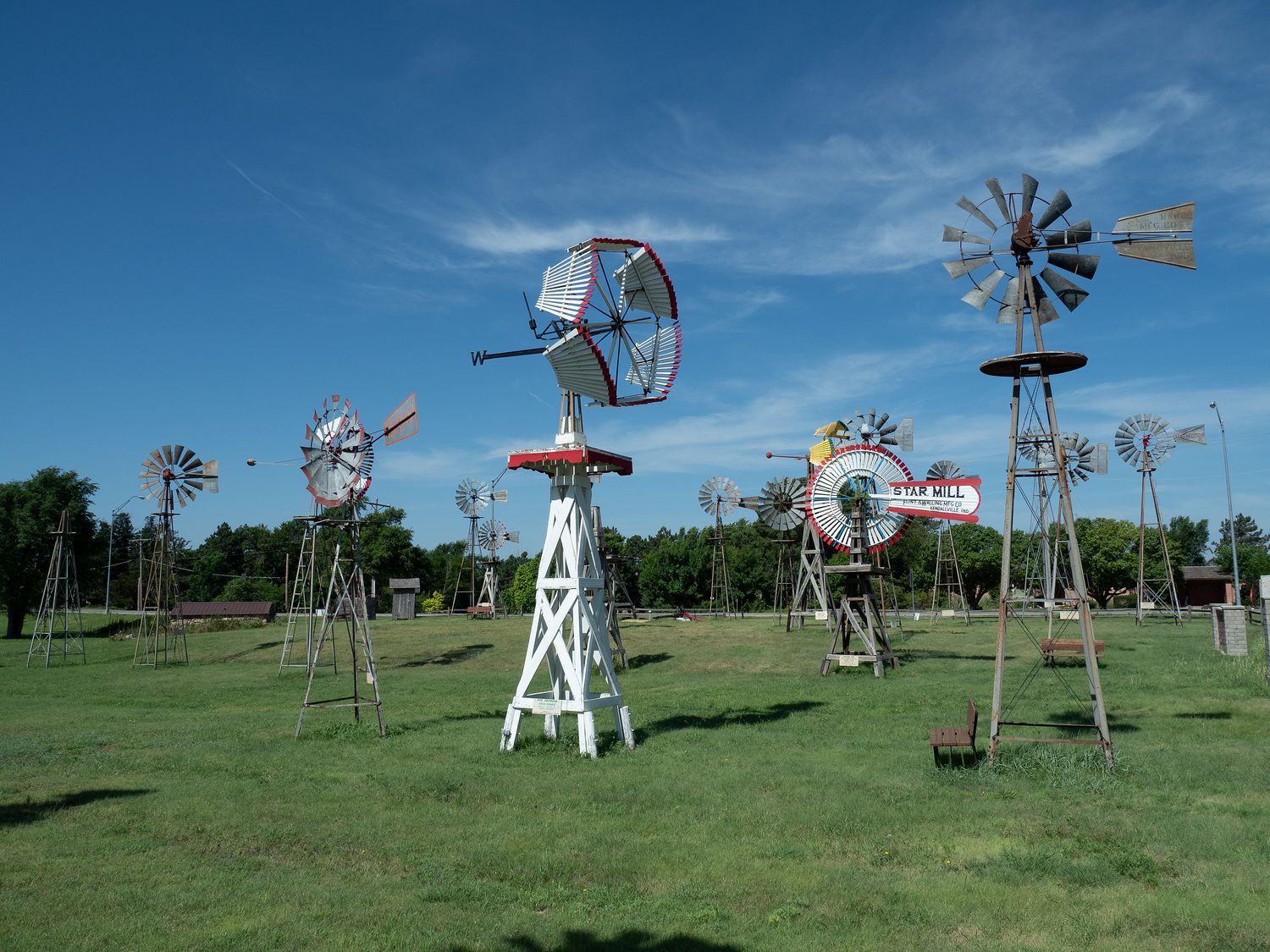 Today we went on a strange run that wandered through parks and along the roads in Dodge City. It wasn’t a bad run at all, just meandering and a little difficult to follow. Running by the road isn’t great, either, since you inevitably cross a ton of streets, which just slow you down.

Despite all of the concrete, we did spot a ton of wildlife. What kind? Well, “wild” might be a bit of a stretch. We saw rabbits. Everywhere. I counted more than ten rabbits on our run this morning. And did the rabbits flee in terror from two giant humans and a rabbit-hungry canine? Oh, no. The rabbits just stared at us like we were infringing upon their right to stand on the sidewalk. Ripley jerked on my shoulder so many times when she spotted one of the stupid little things, it’s a wonder it is still in its socket.

After our run, we packed up, had our La Quinta breakfast, and hit the road. The weather was atrocious this morning, with the sun and the humidity. Would you believe the temperature will be decreasing as we drive south? Madness. Anyway, we didn’t have too much incentive to get out of the car, so mostly we just drove on a steady clip, trying to escape Kansas. Why did Dorothy want to go back, anyway?

Along the way, we stopped to take photos of the tiniest fashion model next to one of the many fields of wind turbines. You can see her gazing into the middle distance in her delightful new watermelon frock just above. I tried to use the squeaker I salvaged from a toy she destroyed a few weeks ago to get her attention for the photo, but instead she bolted towards me like I had a rabbit she could eat. I guess she probably still had bunny on the brain.

Before long, we’d ducked into Oklahoma, where the heat began to gradually decrease. Since we weren’t yet tired of machines that harvest the power of the wind, we stopped at the Shattuck Windmill Museum just south of Oklahoma’s panhandle. The museum is an outdoor display of more than fifty antique windmills. I’d say about half of them still work.

Everyone got out of the car to wander around and stretch their legs, even little Ripley, who posed on a brick fence. The indoor section of the museum was closed, since today was Sunday, but even though Mark and I have visited before, I’m not sure we’ve ever been inside. It’s not like they can fit any windmills in there. They do have a radio station that plays a recording about windmills that the owner made on a loop, so you can still get your history, even if the doors are closed. It’s a neat little roadside attraction, at least.

South of there, we drove on through the Black Kettle Grassland, which is home to the Washita Battlefield National Historic Site. The site preserves a southern Cheyenne village where a large battle occurred with the U.S. Cavalry, and many Cheyenne people died. The Cavalry was led by everyone’s favorite murdering jerkface, Lieutenant Colonel George Armstrong Custer.

Once again, we left Ripley in the running truck while we went in to get our stamp and look around the museum. We also picked up a map, so we could take the little loop drive around the park. This park is particularly dark and depressing, given the subject matter. To give you a hint, the battle is also called the “Washita Massacre.” Up to 150 Cheyenne were killed, though the estimates vary. If you’d like some details about the battle, I suggest starting with the Wikipedia page.

To describe it briefly, scouts (who were Osage Indians that worked for Custer) followed a group of native men who were alleged to have raided a white settlement back to Black Kettle’s peaceful winter encampment, where they attacked at daybreak, killing warriors as well as women and children. Black Kettle and his wife were shot in the back.Following in the wake of this battle, Custer’s men rounded up 675 horses and ponies and slaughtered them so that the natives couldn’t use the horses to attack his men. Inside the museum, people have painted small wooden ponies to honor the horses killed. I thought they were cute until we read the signs.

If you’d like to think about something a little more upbeat, have you ever really looked at some of the Native American beadwork that you find in museums and art galleries? Most of what you see of made of tiny, perfectly-shaped, delicate, and colorful beads. Where did they get that stuff, anyway? Older native beadwork, which is a little harder to find on display, is made of bone, shell, copper, and stone. I’m sorry if this has occurred to you already, or you’ve looked into it yourself, but I hadn’t ever considered this before.

Most of the fanciest beadwork we see in native art is made with European beads. Those tiny beads? They are colored glass, and didn’t start showing up in native beadwork until Europeans started to trade with them, beginning as early as the 1600s, with the heydey of bulk glass beads beginning in the 1840s. Imagine sewing thousands of tiny glass beads onto a dress, boots, and gloves in matching patterns. How patient they must’ve been! I’ve only recently realized all of this, while browsing through one of the many Native American-related national park sites, and it is kind of cool to think about, especially when you want to forget a guy who shot horses for funsies. Glad we visited the site of good ol’ Custer’s Last Stand first. He got what was coming to him eventually.

Anyway, we had lunch at a Taco Bell in a gas station, which is never the wisest idea, but we did survive it. It was better than Taco John’s, but can’t hold a candle to Qdoba or Chipotle. Even Moe’s Southwest Grill and Taco Cabana are a head and shoulders better than Taco John’s (and Taco Bell, really). Unfortunately, unless we wanted to eat in another hour or more, we did what we had to do. But you probably don’t read along for my opinion of chain Mexican restaurants, right?

Other than a few gas station stops, we were mostly just pedal to the metal, booking it for home. We made it in at a reasonable hour, and found that our lovely pool-sitter had already turned our AC down to a nice temperature in anticipation of our arrival. To think, just a week or so ago, we were worrying about snow. It was nicer here in Texas than Kansas, and definitely cooler. Denton has had a bit of rain while we were gone. Ripley was happy to make it home to her yard, where she doesn’t have to be on the leash for any and old bathroom breaks. She’s a modest girl.

In the next few weeks, we have a small trip to Galveston and a longer trip to the Virgin Islands planned to fill the rest of our summer. In the fall, we have trips to Korea and a leaf-peeping trip up through Colorado and Utah with my parents. It should be a busy few months!