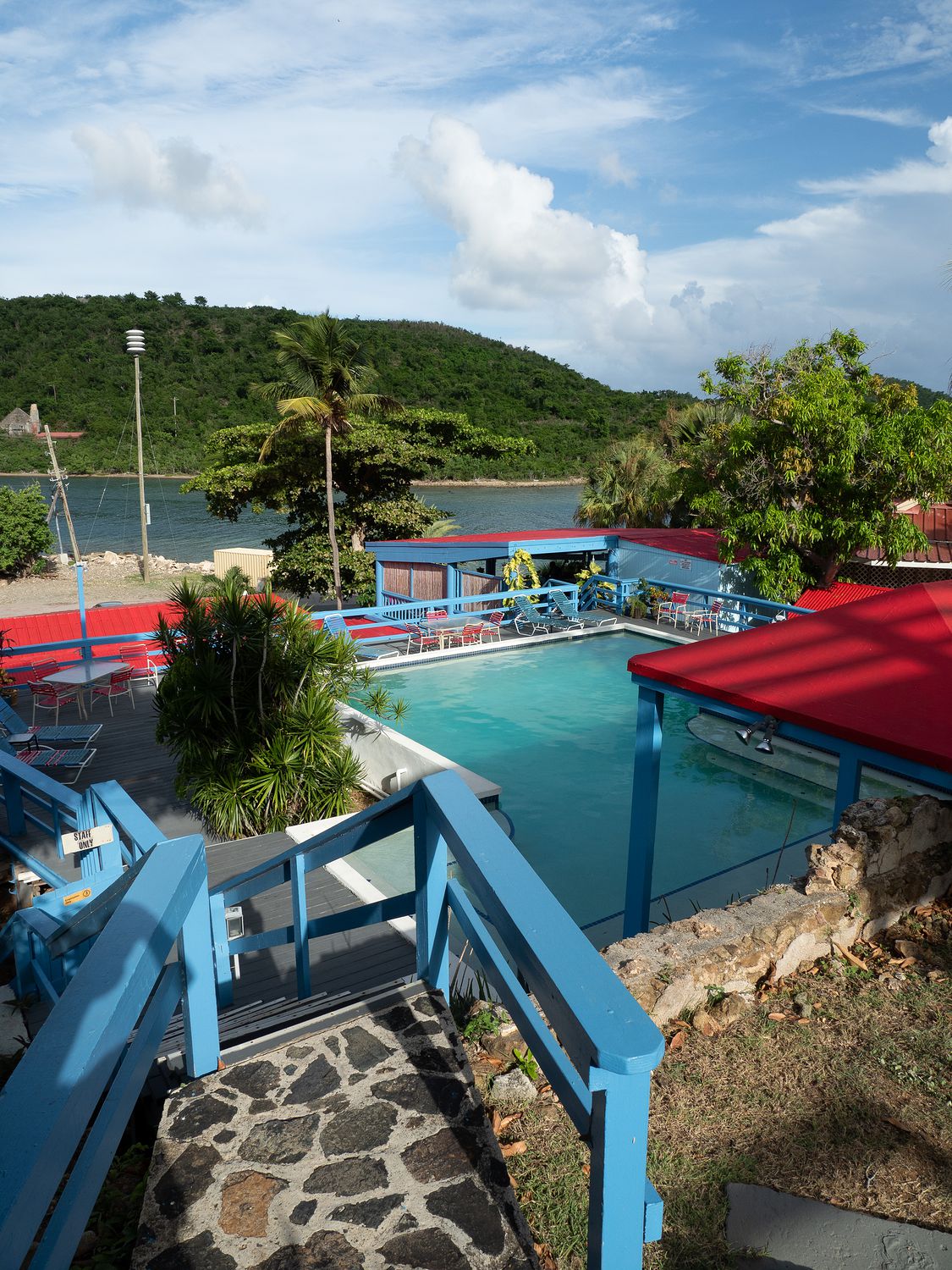 Hey! It’s 8:09pm here as I start to write this blog post, and I’ve been up since 2am, so please forgive me any egregious spelling or grammar mistakes. I am not sure that I’m all here anymore. I mentioned it after our Banff and Jasper trip, but now the time has arrived, and it couldn’t have arrived at a better time. It’s been like 104°F back home, with heat indexes up to like 109, and I am very glad to have arrived in the Caribbean, where the high is a warm 87°F during the day, and an equally warm 80°F at night. It isn’t hard to beat the temperatures in Denton just now.

In any event, it’s been quite a long day getting here, and we are pretty tired. We aren’t here for Mark’s work, or anything like that. No, we are in the U.S. Virgin Islands because there’s a national park out here, a real one, and we are totally committed to getting all of those. Some day. So, time to knock another park off the list. We will be visitng two of the three major islands in the U.S. Virgin Islands: St. Thomas and St. John. There’s a chance we will visit one of the British Virgin Islands as well, but nothing is set in stone.

That’s something else about this trip: these islands are tiny, and we are on each one of them for four days. I know you’re surprised. “A relaxing vacation?” you gasped, totally shocked. “How will you drive 6,000 miles?” Well… we may go stir crazy, but can’t. There’s aren’t enough miles of road to even count them up for a trip total. So, I hope you’re here to enjoy a slightly different kind of vacation this time.

At 2am, after a measly 4 hours of sleep, Mark and I got up and showered to head to the airport. We dropped our baby at grandma and grandpa’s house last night, where she will spend the next week tormenting my parents’ dogs with her boundless exuberance. They’ll be glad to see the back of her when we take her home. But anyway, we made good time without Miss Ripley, and left for the airport just before 3am, which was the goal. We parked in the Remote North parking lot by 3:45, and waited around for the bus, which finally deposited us at our terminal just after 4am.

After security and check in, we waited in the airport until our 6am flight, on which our seats were upgraded to Business/First class on our first flight of the day, to Miami. I’d never flown first class before, and it was nice, though it hardly matters on such a short flight. It’s a little under three hours, which is problematic, because Mark and I tried to watch Avengers: Endgame for the first time, and that thing’s run time is crazy long. We didn’t manage to finish it. We had a lovely breakfast on our flight, though, with plenty of leg room in our seats, and since we were in the second row (of the entire plane) we were some of the first people off in Miami.

It was 9am at home and 10 in Miami when we got there, which left us with a little over two hours to kill before our flight to St. Thomas. Mostly we sat around and played on the free Wifi. We have been a little zombie-like today, given how tired we are. Zoning out felt like the right thing to do. About 20 minutes before boarding time, we remembered that we weren’t first class on the next flight, and we would need to buy our own lunch, so we rushed away from our seats to find something to eat.

We ended up with airport Chinese, which is nothing like real Chinese food. I can’t say we really enjoyed it, but it was better than starving, and we were at least able to buy and finish it in time to make it back to our gate before our official boarding time. But… it didn’t matter. Our flight was supposed to take off at 12:18, but it was barely boarding by then. Apparently the plane came in last night, but it just took them /so/ long to get the silly thing across the airport for us to get on it on time. Maybe they should’ve started earlier, hmm? It’s not like they make this same flight every single day.

It actually takes another three hours to get from Miami to St. Thomas, though it doesn’t look like it would from the map. Our plane wasn’t totally full, but it was close enough, and Mark and I were once again relegated to the back with the regular folks. Alas. How will I ever fly coach again knowing how comfortable first class is? Too bad the tickets are insanely expensive to buy.

We landed in St. Thomas not long after our originally scheduled landing time, having made up some of the lost time in the air. St. Thomas’s airport is so small that we disembarked from rickety ladders right onto the tarmac. After that, we made our way into the un-airconditioned airport, where we waited for our checked bag to arrive. It took about 20 minutes. That isn’t terrible, or it doesn’t sound like it for a small airport, but it did give us time to pick up our rental car.

Except… our rental car wasn’t clean. So we got to wit an extra twenty minutes (along with a whole bunch of other people waiting for the same reason) while someone went out and “cleaned” our rental car. I’m not sure anyone there was actually doing anything. We’re definitely going to have to adjust to “island time” while we are here.

Finally, around 4pm we made it out of the airport and into our rental car. The cars here are American made cars, and the driver’s side is on the left… but you also drive on the left. Because that makes sense for an American territory with American cars. Anyway, it wasn’t too much trouble for Mark to do, just a little odd. I spent much of our (short) time driving to our hotel chanting “keep left” every time he had to turn.

Our hotel is back along a tiny, winding road, right on the water. St. Thomas may be a part of the U.S., but it doesn’t much feel like it. It was once a Dutch colony, but that doesn’t explain everything. Culturally, it feels more Caribbean than American, and it looks the part, too. The buildings are old, the streets are narrow, and everything looks like a strangely tropical and very old European city.

Our hotel is cute and old-fashioned. We checked in and went up to unload our bags and look at our room; it’s just a single room here in St. Thomas. In St. John, we have what basically amounts to a small apartment. Once we’d unpacked and done a little bit of searching around on the internet, we ventured into Charlotte Amalie, the nearest town, to take a look at what the town had to offer.

We browsed around the grocery store first, trying to decide what we could grab for breakfast tomorrow. Before we decided for sure, Mark mentioned he was hungry, so we elected to go get dinner first and then come back to the grocery store, so we could get cold stuff to put in our little refrigerator. We didn’t have a solid dinner plan, so we cruised around fruitlessly (Google Maps isn’t great here) until we gave up and had Sbarro pizza so we didn’t die of starvation while we looked for something better. We will have more of a plan tomorrow.

After dinner (which we ate outside under a huge umbrella while a tiny rainstorm passed overhead), we went back to the grocery store for milk, juice, cheese, and bananas. We still have two breakfast bars from this morning that we didn’t eat, so we will have those tomorrow. After that, we need a better breakfast plan. We don’t have any silverware in this room, so we may have to buy some plastic cutlery so we can get our daily yogurt fix.

Back at our hotel, we took some photos of the bay and some of our many chicken friends. Like Hawaii and a large number of other islands, St. Thomas is covered in semi-feral chickens. I bet we saw at least 50 chickens today. I can’t wait to hear all of the roosters crowing at dawn. Yeah. Sounds like fun. Not that we won’t be getting up early to run anyway.

Tomorrow we will do our first drive around the island and hopefully visit our first beach. We have a number of things marked on the map to visit, and I think we will probably swim, either in the ocean or in our hotel pool, depending on where we end up. We’re going to run along the water, which should be nice early in the morning. Sunrise is right around 6am, so we will be up with the roosters, I guess. Maybe we will take an afternoon nap. Isn’t that what you do on relaxing vacations?