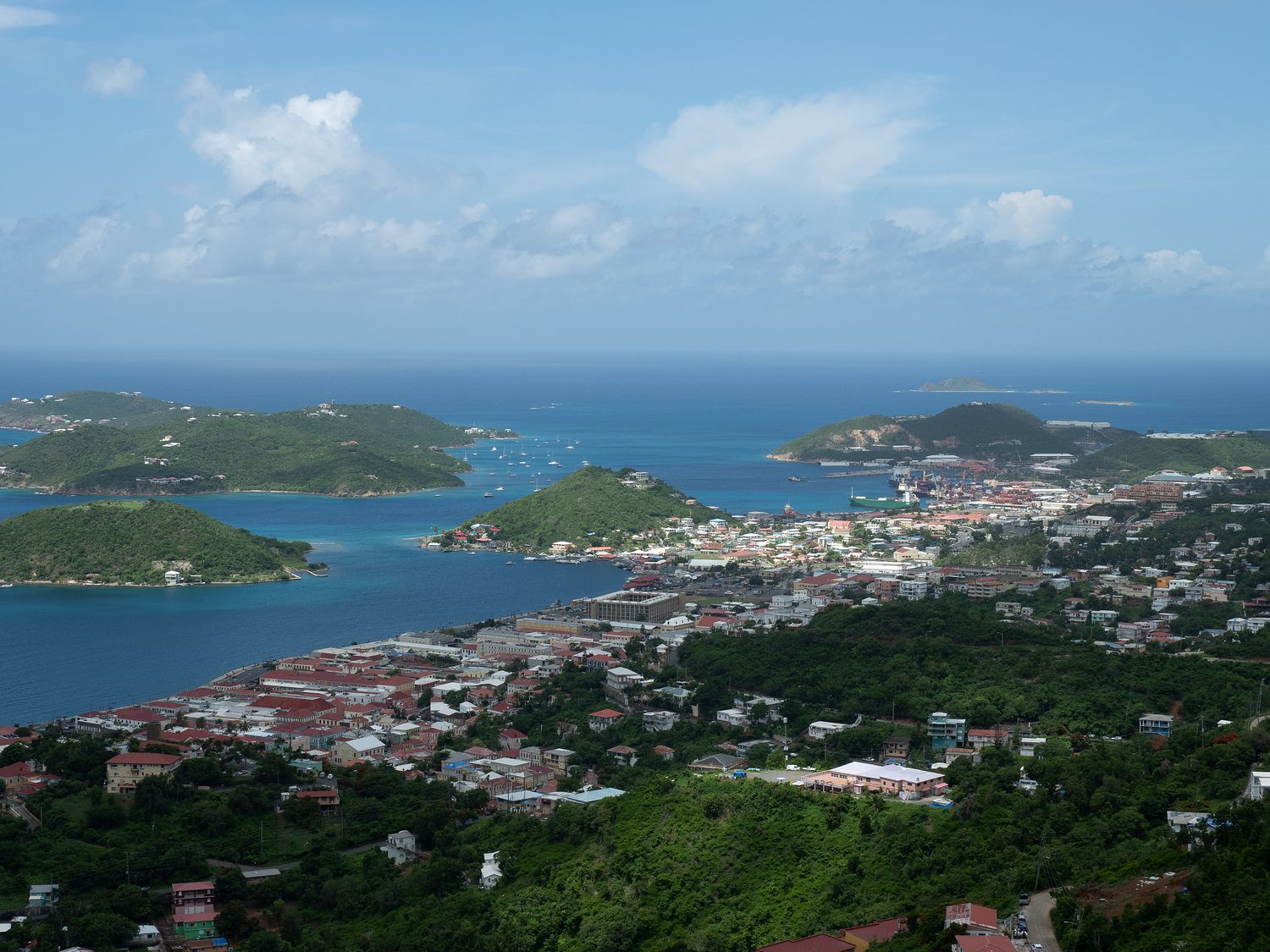 It was a quiet day two. We were up at 6am to go for our run, which was just along the promenade next to the water that goes along the front of Charlotte Amalie, which is the town where we are staying. I don’t think I mentioned that yesterday. Despite its small size, St. Thomas does have multiple towns, including the town of St. Thomas.

Anyway, while sunrise is reported to occur around 6am here, it was already up and rather hot when we got outside at around 6:15. I think I got a little sun on run today. Tomorrow we will be getting up at 5 to avoid making the same mistake twice. It was much warmer than we wanted it to be, and Mark’s too white to be running that late in the Caribbean sunshine. I hate to get up earlier, but like I said yesterday- afternoon naps.

The bugs are pretty serious here, so we went for our run coated in bug spray. Nothing smells quite like warm bug spray. Eugh. We came back to our hotel after our run (on foot, since the promenade is close enough to walk to). We lounged for a while to cool off before we took our shower. We also stopped and chatted with the owner/proprietor of our hotel, who has a sort of deck that leads up into the hotel, where he greets guests. He had cold water and hot coffee on the deck today, which was nice after our hot run. Well, the water was nice. Mark’s a little crazy to be drinking that hot coffee while we were still so hot.

Our room is up on a hill right next to the pool, on a little strip with 6 or so other rooms attached. There’s another bunch of the same off to the left, and back down at the base of the building, next to the parking area, are two more rooms on the water in what looks more like a house. There’s a gate on the road back to the hotel that locks at 8pm, and another gate leading up to the rooms and the deck and pool, which is locked when the proprietor isn’t around. It’s a nice little place, and the owner loves to give suggestions about what to do and where to go and what to eat.

We had breakfast from the groceries we bought last night: cheese, bananas, juice, and granola bars that were in my bag for the flights yesterday. It’s a little funny having enough time to just sit around and cool off before we shower. We did finally get around to that, though, then we took a few minutes to decide what we wanted to do today.

Our first plan was to go to the beach first thing after we showered, but ultimately we decided that would be a little silly, since we would just have to come back and shower again. We decided to do that at the end of the day instead. Instead, we decided to start our day with a trip to the Mountain Top, which is basically the tippy top of the island.

I suppose I haven’t mentioned it yet, but St. Thomas is pretty hilly. In fact, the mountain top really is kind of mountainy, despite my initial assumption that it would feel more like a big hill. You can see it behind the town of Charlotte Amalie, and we obviously noticed it yesterday, but it didn’t seem nearly as big as it turned out to be.

Getting up there was a chore. The roads in the Virgin Islands are… interesting. There are tons of one-way streets, and many of the two-way streets are only wide enough to be one way, since cars have parked all along both sides, leaving you to bob and weave around other traffic and parked cars to make it down a road. On top of the weirdness of driving on the wrong side of the road from the right side of the car, Google Maps works for shit here, so getting anywhere with it is a bit of a crapshoot. It can only guess what roads will work and what will be blocked, and it frequently totally ignores one-way streets. It’s a really special situation for the navigator (I mean me).

The road up to the mountain top is steep and winding, and if you miss the turn you wanted, you can suddenly find yourself in a warren of tiny roads and houses with no idea how you got there. Eventually, we made it to the top, where we pulled off at the Mountain Top, which is an overlook, a bar, and a tourist shop. It might even be something else I’m forgetting. I know they have food and ice cream sometimes, especially when the cruise ships are in town, but I don’t know if they did later in the day today. All I know is those portions were closed this morning.

What was open, other than the gift shop? The bar. And no, people weren’t just drinking mimosas and bloody maries. Oh no. People were drinking banana daiquiris. Made with rum. Apparently those were invented here. Or at least, that’s the claim they make. I wouldn’t know. All I know is that it is very brave to drink a banana daiquiri that early in the morning. Or banana or raspberry rum. Which is also a thing here. And maybe everywhere. Who knows?

The gift shop is giant, and it has gifts that range from $5 up to hundreds of dollars, which I guess isn’t all that surprising. We didn’t buy anything, but we did enjoy looking around. We discovered a semi-precious stone called larimar in the shop that’s apparently native to the Caribbean islands. It is only found in the Dominican Republic, and people weren’t really mining for it until the 1970s. It’s a pretty, washed-out blue-grey stone, with some white highlights in places. I like it well enough, but they want way too much money for it. It’s only semi-precious. Plus, everything they sold had giant pieces of the stuff. I don’t go in for giant jewelry. Maybe we will spot it somewhere else.

Outside the shop on the deck is a wonderful view of St. Thomas and the other islands in the distance. You can see all of the bright green islands, the perfect white beaches, and those lovely crystalline blue waters from up there, as well as the city of Charlotte Amalie, ranged out below. It’s a neat view, and it’s kind of fun to look over at the British Virgin Islands and St. John, and speculate about what we will do over there.

From the mountain top, we took a different road to descend the mountain. We stopped at another viewpoint called Drake’s Seat, which is a little lower down the mountain, and gives a closer look of Magen’s Bay, which is home to one of the most popular beaches on the island. I think we are going to visit tomorrow, when everyone should be busy at work. The hotel proprietor says cruise ships are mostly in town on Tuesdays this time of year, so I’m not too worried about it being packed. It certainly didn’t look too busy this morning, looking down at it.

We also stopped at a Charlotte Amalie lookout to get the best view of the town. It’s funny, but knowing the island isn’t large, and then looking down at it like that and seeing so much of it, really gives you a sense of perspective. Only about 50,000 people live here, which is funny, since Denton has 136,000 residents. All of the islands of the U.S. portion of the Virgin Islands combined have a smaller population than Denton.

From the mountain top, we looped around down the island to look at another potential beach to visit later in the day, called Hull Bay Beach. That one was a little more popular with boaters, but it still has lovely white sand and blue water. We might visit it on another of our days here in St. Thomas.

After checking out the beach, we drove over to the larger town of St. Thomas, which is where you can find a few more stores and much more space. They even have a Home Depot and a Kmart. Charlotte Amalie is an old town, and has the deep water port, but it is crammed into a tiny section of the island by the mountain. The town of St. Thomas has more room to spread out, so it has more things. We had lunch there and even visited a real grocery store. Thrilling, I know.

Lunch was at Vegi Plus, which serves meat, but also serves vegetarian facsimiles of meat dishes, like vegetarian steak, barbecue, and scallops. It was wonderful, but was way more food than Mark or I could put away. We could’ve split a plate and had plenty of food. It reminded me a lot of the vegan soul food place we had in Washington D.C. That was especially true of my barbecue tofu. They have fantastic food. It was seasoned really well, and I imagine it is the closest we will get to Caribbean food while we are here, since it is pretty hard to find any of that that is vegetarian.

After lunch and a trip to the grocery store, we headed back to our hotel to get out of the mid-afternoon sunshine. We were planning to go back out later to visit the beach. Once we were back, we played around on the internet for a bit, then really did take that afternoon nap. It was lovely. Maybe we will do it again tomorrow.

Around 4pm, we decided to venture out to visit the beach, but just as we walked out, it started to rain. We stopped under the awning of the porch and waited out the small storm. I ended up in a woven basket chair suspended from the ceiling, and Mark kept turning to around to watch me spin while he tried to get a good photo before I disappeared. It didn’t work out, but spinning was hilarious.

Unfortunately for us, the rain wasn’t our only problem. The beach we’d selected, College Beach, which is back close to the airport, was packed today because they were having a chili cook-off. We didn’t even bother to try and stay. There was nowhere to park, and the beach was incredibly busy. Instead, we took the loop around the western end of the island to look around, but we were thwarted in our attempts to make it out to the edge of the coast for a photo. There was a private housing development in our way.

Around 6pm, we made it back into Charlotte Amalie and looked for dinner. That late on a Sunday was even worse than yesterday for finding food we could eat that was also open. We tried to walk to a halal deli that served falafel, but it turned out to be closed for the day. We ended up back at the grocery store, where we got hummus and taboule and a couscous salad. We weren’t too hungry anyway- that plate from Vegi Plus was definitely the big meal of the day.

Tomorrow will be another leisurely day, but we are going to try a little harder to make it to the beach. How can it be hard to get to a beach and swim when you are in the Caribbean?